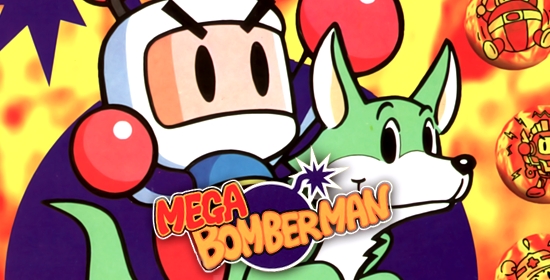 Rejoice, bomber fans, your tiny hero has surfaced on the Genesis at last, and he won't disappoint you. New levels, new enemies, and plenty of other new touches make this game one of the best bombers ever.

Just when you thought the original Bomberman concept was exhausted, Sega revitalized the explosive little guy with great new adventures for his Genesis debut. In the one-player Standard game, you scurry around odd-shaped fields, laying bombs to destroy weird new critters and big bosses while trying to reach the exits before time runs out. Like Super Bomberman 2 on the SNES, which also introduced new action/adventure levels, these new Genesis levels invigorate the basic Bomberman concept, which is almost five years old.

In addition, you can also challenge up to three other friends in the traditional Battle, which presents the familiar grids, hides recognizable power-ups like Multibombs and the Kicker, and requires traditional Bomberman strategies. You also get a power-up that's not in the original game: animals that you ride like Star Wars Taun-Tauns! These touches, coupled with the classic head-to-head (-to-head-to-head) action, should once again make Bomberman a party favorite.

ProTip: Take out this banana boss by bombing his monkey and then setting a comer trap. Be careful -- a single touch from either enemy will do you in!

The graphics and sounds are... well, they're Bomberman, so you know what to expect. The man himself and most enemies are still small, stiffly moving, Japanese-style characters, and the backgrounds are about average for 16-bit games.

Just because this game looks simple, you shouldn't expect simple game play -- it's the hardest B-Man yet. You'll be surprised by the trickiness of the Standard levels, and with no difficulty select and a variety of special bombers to choose from in Battle mode, it's every Bomberman for himself. With a little practice, though, you'll master these easy controls and turn into a bombin' fool. This is one addicting Bomber, man.

One of Game Players favorite office time killers finally arrives on Genesis. No foolin' - in its multiplayer battle mode, Super Bomberman 2 has kept the entire Game Players staff crowded around the screen, controllers gripped tight in our hot little hands, trying desperately to blow each other to smithereens. For honor, for glory, and more than once, for cold hard cash.

And now we have the Genesis version. Mega Bomberman adds a few new wrinkles. There's a whole slew of different Bombermen to choose from, so you don't look exactly like the other guys on the field. Initial tests were promising, but we're gonna keep plugging at it just to make sure it plays well. Tough job, but somebody's gotta do it.

Bomberman '94 is a real blast. The best of Bomberman is here, with even more enhancements to really speed things up. There are new kangaroo-type animals that can kick blocks. This game has up to five players at the same time. This is intense!

Mega Bomberman is a video game of the Bomberman series, utilizing the same “explosive” gameplay, but in a different setting. Graphically, this is the first game to feature the new (1993) design of Bomberman, as well as other characters from the series.

The game’s story is simple: Bomber Planet was once protected by five spirits; however their source of power was destroyed when the evil Bagular invaded, and so the planet was split into five pieces. It is Bomberman’s goal to restore the planet to its original state.

As the title implies, you fight using bombs and gather numerous bonuses which help you accomplish your task. These bonuses can increase the range of your bombs’ blasts, allow you to place more at once, trigger them whenever you wish or many others. The areas all have their own unique aspects; the ice maps, for example, may have slippery ground, while other maps may not have any destructible blocks. Not only do the areas provide a change of scenery, but they also add some interesting and game-altering mechanics to the mix.

Mega Bomberman’s levels are set in six different areas, including a jungle, a volcano and the sea. In single player mode, you must defeat various creatures and a boss at the end of each level; the game has a password system that allows you to begin from a certain level, but this resets any bonuses you may have gathered up until that point.

In multiplayer mode you battle up to four other players, and these can be computer-controlled, but the most fun ensues when four people are gathered, trying to blow each other’s character to bits. It is also possible to play in teams. If it sounds chaotic, rest assured that it is and that is exactly what makes the game so fun and worth playing for hours on end.

To conclude, while single player mode may not be as enticing, Mega Bomberman truly shines through its fun-filled multiplayer mode, and this is probably true for other games of the series. Even if there are newer versions available, it is still very playable and worth trying, if only to see where it all began.