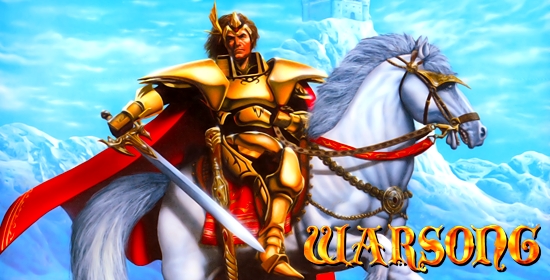 You are Garrett, prince of the kingdom of Baltia. Your castle has been surrounded by the evil Dalsis army, and only through your guile and the help of your friends were you able to escape with your life.

Now, on the run with a bare-bones military force, you must regroup and gather your allies for the final battle!

My Kingdom for a Horse

Warsong by Treco is part military strategy, part fantasy role-playing -- an unusual hybrid that tests your ability to outwit the computer's army in 20 different scenarios. As in most military simulations, you determine the strategy, but the computer runs the battle.

You start by controlling Prince Garrett, along with his mentor, Baldarov, the Swordmaster. At the beginning of a scenario you purchase military units (your army) with gold. The game starts you with 350 Gold Pieces, and after the first battle, you'll receive moola for the number of foes you dispatch. As the game progresses, more allies will join your ranks, and in turn, you'll be able to purchase a bigger army

The 20 battles you fight are all interconnected -- that is, this is an ongoing story with as much detail as traditional fantasy role-playing games. And if you lose one of your leaders during any skirmish, he's history!

The Battle of the Bulge

Each scenario consists of several stages. Usually, victory comes with the defeat of the enemy leader, but sometimes you simply have to reach a certain point on the map.

In Scenario 9, stay on land and let the Krakens (those giant squid creatures that appear at Turn 6) decimate the enemy's ranks before you take a crack.

One thing all the scenarios have in common, though, is the game ends if Garrett bites the dust.

Ok... so where do all those fantasy role-playing elements come in? As in traditional FRPG games, Prince Garrett and the other leaders gain experience with each battle they fight, and every tenth level they evolve into a more powerful character.

With experience, warriors get higher Attack and Defense ratings, which help shift the battle's outcome in your favor, and spellcasters gain more powerful spells and more magic points to cast them with.

The best way to build all your characters quickly is to use your more powerful characters to whittle down the opposing army, then finish them off with characters who need experience.

Some Day My Prince Will Come

Warsong is a long, sometimes grueling, game where the average scenario takes 60 to 90 minutes to win. A battery backup system saves up to four campaigns. Even if you aren't a big military strategy fan, Warsong's storyline and action will hook you. If you're into fantasy war games that require a little bit of brain power, Warsong will give you the action you crave.

The evil Dalsis Empire is attacking the castle of Baltia to take the War-song sword. King Alfador orders his son, Prince Garret into the country to escape death and to join forces with allies throughout the kingdom. Their goal is to battle the Dalsis Empire and retrieve the sword.

This complex battle simulator involves twenty game scenarios with set winning and losing conditions. As you start off, you will be given objectives and then you will have the opportunity to choose your commanders and assign soldiers to them. You will then be able to position your commanders on a map. Both you and your enemies will be able to give commands to your units consisting of movement and attack scenarios. Each phase of these commands consists of one turn. Within your units' turn you may choose to move your units, attack an enemy, cast spells and heal yourself with your leaders. Once you are finished with your move, you may choose to end your turn and the enemy will commence to his movements. In addition to this, each unit has its own class, defense and attacking power, strength in hit points, and moving power. Even the terrain on which the battles are fought affect the results of each battle. These phases go on until one side wins.

The Dalsis Empire has laid siege upon the Castle of Baltia to seize the legendary sword - WARSONG. In desperation, King Alfador sends his only son into the countryside, away from impending death. Now, Prince Garette must rally his allies from across the kingdom, and lead their armies in a battle to recapture the sacred sword, and restore justice...

It began as a clear, sunny day. Suddenly, the skies became shrouded in darkness, and the air crackled with evil. Dark elves are storming the castle of King llzack! What ominous force is behind this outrage? King Ilzack orders his son Ledin to flee, that his son might live to avenge his death and sing the Warsong.

Warsong is an action/strategy quest following the adventures of Ledin, son of Ilzack. In his travels, he will fight many battles, gain experience, and meet friends. Eventually, he will take his father's position as King. After this great triumph, he must confront the evil forces that murdered his father, ridding the land of corruption and despair.

Take command of several soldier outposts, protect your citizens, exterminate monsters, and gain magical abilities! Fend off the impending destruction of good and compassion! Ledin is yours to command through each of the 15+ scenarios jam-packed with action and strategy! Buy hirelings and locate magical swords to help you on your journey. Can you restore your family name? Will you discover the secret behind your father's death? The evil emperor Vorzel is waiting for your answer...

These weak fighters protect the king and the castle. They a good buy for your money.

The soldiers are good fighters for the first few scenarios. Use them for frontal assaults.

These proud warriors are excellent on the mainland, especially against monsters.

The archers are excellent for long range attacks and can wipe out most land attacks.

The mermen are incredible land fighters an can destroy the strongest monsters.

As the strongest muscle money can buy, the grifons can fly over walls for surprise.

In your travels, you will come across several items that you can buy or find. The swords can increase your attack power substantially, and the shield is perfect for awesome defensive maneuvers. Use the wand for increased magical capabilities and the necklace for "good luck." Select these items wisely and give them to the character that can utilize them to their fullest potential.

"Warsong" is the name of a legendary sword of great prestige and power. The family of Baltia's got it; the evil emperor Pythion wants it. That sets the stage for massive battles, which tear up this game's strange fantasy landscape. Military strategy game meets fantasy RPG. The bulk of Warsong involves trying to win campaigns -- 20 in all. The winning and losing conditions for each scenario vary, but basically you control key members of the Baltia kingdom and the armies they lead. Lose one battle, however, and you lose the war!