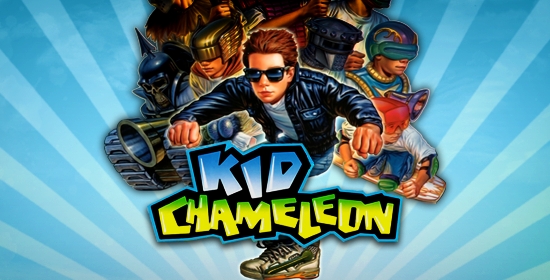 Take A Walk on the Wild Side

In Kid Chameleon folks everywhere are playing a dangerous game called Wild Side. Wild Side's hologram world creates a reality of its own. Lately, gamers who walk on the Wild Side aren't coming back. It's up to one kid -- Kid Chameleon -- to take on Wild Side's nasty boss before every kid is kid-napped. No kidding!

Kid Chameleon features multiple levels of vertically and horizontally scrolling action for one or two alternating players, who use Alex Kidd-style jumping and running. There are four stages in the game. Each stage has 17 radical levels with gorgeous graphics and a bad boss. In each level, the Kid must find the flagpole to clear the level. Sound easy? Not! Each level is a strange and mysterious world filled with obstacles: ice caverns, waterfalls, and beasties such as fire-breathing dragons and fearsome lions. The dragons and lions threaten to do serious damage to Kid Chameleon's health.

It gets better. Each level is also filled with hidden secret rooms, tunnels, and other surprises. There's more than one way to escape from many rounds. If the Kid finds a Telepad, he can use it to warp to other areas of a level, or even other areas of the game.

Our hero, Kid Chameleon, is tough on his own. He runs fast, flips up onto objects, and jumps on top of bad guys to do them in (a la Alex and Mario). The Kid has a Life Bar and takes a hit each time one of the bad guys bops him. When his life is gone, so is the Kid. You begin the game with three lives and three continues. They won't take you too far in this game.

Fortunately, the Kid has a few tricks up his sleeve...err, hat. Kid Chameleon can use his noggin' to bust breakable blocks. When these blocks crumble, they often reveal secret power-ups. Most of the power-ups are special Diamonds, which the Kid collects. When he's in trouble, he activates their special powers to perform such nifty tricks as the Circle of Doom (kills any enemy it touches) and the Samurai Haze (slows enemies down).

Other power-ups include: Clocks (which add three minutes to the Kid's time), 1-Ups, and Coins for extra continues.

It takes a while to realize that Kid Chameleon's not just another pretty face. The graphics in the first series of levels are breathtaking, but the levels aren't too tough to defeat. As the game progresses, the challenge gets tougher and tougher. Strategy comes into play when you must decide which hat gives the Kid the lift he needs to beat the area. Then you realize just how BIG the game actually is. You start to search every secret nook and cranny for the power-ups that are going to give the Kid the staying power he needs to make it!

Kid Chameleon has a clever combination of Alex Kidd's best games, puzzle strategy elements, and arcade-style action. The game introduces enough different faces to please almost all gamers. One of the hottest Genesis action to hit the Winter's Consumer Electronics Show, this Kid is sure to give you your money's worth. Hey, would we kid you?

In the arcades, there was one game that stood out above the rest. It used holograms that grew to be a bit too real. The boss of that game starting kidnapping the players. Now it is up to Kid Chameleon, the best player in the biz, to stop him! Kid Chameleon has the ability to wear different power suits to change his form into a fly, spaceman, and rhino! With over 60 levels of play, Kid Chameleon will be sure to please!

The depth and overall theme of this game is really wonderful. Not only is the action is this game presented well, but beyond the hero-enemy interaction are a variety of other play mechanics that require you to discover just who's the best person men to be in each situation. KC also gives you a lot to do in one package.

Talk about a long game! With over 1800 screens you had better plan on spending some time with this cart. The concept is very good as with tons of hidden items and bonuses this is a game which you will want to hunt and search a lot. I like these types of games and it makes the game much more than just another scroller.

Sega has a very cool idea for an action cart here. The game play is similar to Mario in a lot of ways and there are plenty of hidden power-ups bonuses. The graphics are kind of cartoony and the music is not great but it does fit the game well. Lots of techniques and good game play make this cart a sleeper.

Awesome!! Kid Chameleon is the most radical video game hero to come around since Sonic! If you want a REAL challenge, take on the video game adventure of a lifetime! With over 60 levels, 10+ power-ups, and above average game play, Kid Chameleon is a must for anyone who likes Mario or Sonic!

Kid Chameleon is a radical dude who's on a trip through more than 100 levels of forests, mountains, islands, and underground volcanoes -- each with secret passages and areas. This kid uses his head, err... actually his hats or helmets to make his adventure easier. Each of the different helmets he dons changes him into a different creature. As Rhino-Head he smashes through walls. When he's Skull Crusher he shoots skulls. As the Samurai he slashes anything that gets in his way! Now that's a head trip!

Reboot
Remember the rendered cartoon ReBoot? It's still around, but these days (or some time down the road) the show is taking on a new form.

Wayne's World
Once you start on the adventure in Wayne's World, you won't want to quit because it's party time.