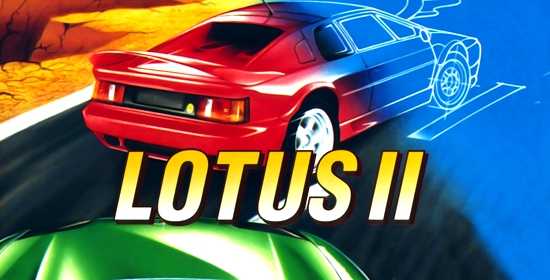 Lotus II wants to blast right by Top Gear 2 as the hottest, most creative driving game ever to hit the 16-bit highway. Unfortunately, shaky game play runs this game right off the road.

You want to like this game, if only because of the premise and the numerous options. Sleek, sexy Lotus cars speed along 13 distinct backgrounds, ranging from tumbleweed-strewn deserts to glittering futuristic cities. You have the ability to customize these courses to make them have more twists, dense fog, steeper runs, and more difficulty in nine different ways. Plus, you can construct and save courses of your own design, an attractive option with infinite possibilities.

Split-screen head-to-head competition between two players should have guaranteed a good time for all, but regrettably, the good times don't last long. Some standard racing features are noticeably absent from Lotus IT. There are no on-screen maps, so you can't tell what's ahead, and no rear-view mirrors, so you can't tell what's behind. You can't customize your car, either, or service it in the Pits (the Pits really are embarrassing -- you just stop your car and it automatically refuels itself).

The controls are weak, too. Annoyingly, your car drifts on straightaways. Plus, you can't leave the track or do spins (realistic features found in other racing games).

Obstacles slow you, but they don't destroy you. Drive with reckless abandon.

The interesting graphics of the different courses and driving conditions help keep you going, as does the ability to switch soundtracks. Unfortunately, the lack of dynamic sound effects seriously detracts from the action.

Racers who want to really kick some 16-bit asphalt should take Top Gear 2 out for a drive on the SNES. Lotus II is still stuck in low gear.

For those of you that have a need for speed look no further - Lotus II has it. This game is jam-packed with awesome racing action. Nerve-racking courses will keep you on your toes for hours. Choose from a Timed Mode, where you have a set amount of time to complete a stage, and Championship Mode, where you accumulate points depending on your finishing position. If playing both game Modes and tackling all of the different racetracks is not enough to keep you busy, then try constructing your very own track to your liking. Choose from different scenery, curves, length and difficulty. This great option is sure to make any race fan happy, so buckle up and punch it. VAROOM!!!

Experience the fastest two-player head-to-head racing you will find for the Sega Genesis. Race the Lotus Turbo or Elan through a wide selection of cross-country courses and in all kinds of weather conditions.

Licensed by the classic British car company, this game featured 2 modes of play - one has you racing against 19 computer rivals (with witty names such as Alain Phosphate and Crash-Hard Banger), and the other pits you against the clock.

There are 13 different types of races, ranging from Motorways to night-time to sections punctuated by roadworks, and some are lap-based with others being simple A-B. Two players could play on a split screen mode.

The game's crowning glory, however, was the RECS editor, which allowed you to create courses of your own, with theoretically millions possible.

Kawasaki Superbike Challenge
Ever wanted to drive one of those superfast racing bikes? Here's your chance, with this excellent polygonal motoracer from the creators of the F1 World Championship series.

Lamborghini: American Challenge
The objective of the game is to become the undisputed champion of illegal races in the U.S.A.. To do so, the player must race against a group of computer controlled opponents in a variety of illegal races across the country.