Shinobi 3 - Return of the Ninja Master 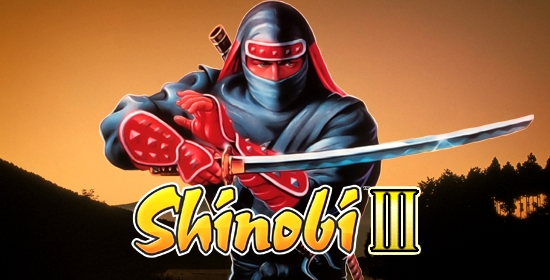 View all 28 Shinobi 3 - Return of the Ninja Master Screenshots

When ninja warriors first stepped out of the shadows of Japanese martial arts legends into Genesis video games, who stood at the forefront? Joe Musashi! It looks like Joe's gonna get back to his Shinobi roots. ("Shinobi", by the way, is another Japanese word for "ninja".) He's better and badder than ever in Shinobi III: Return of the Ninja Master, an upcoming action/adventure game by Sega.

Where Joe goes, Neo-Zeed usually follows. This time, the seedy Zeeders plan a major feedbag with Musashi sushi as the main course. Early story line outlines call for the per usual kidnapping of a Musashi friend or relative. An interesting plot proposal has Neo-Zeed planting a mind-control device inside Naoko's head, which draws her back to the Z Bio Lab. They know that ole Musashi will soon follow.

Pits are no problem.

Neo-Zeed's angry army of martial arts monsters can hardly wait to see Joe, too. He'll face giant samurais, fanged tigers, winged warriors, brain creatures, and other foes. His main concern, however, will be the deadly Bio-Ninjas -- they're his gene-spliced replicas!

When it's clobberin' time, Joe's got his stuff together. He has his old Shinobi moves. He slices and dices with his Katana sword, tosses Shuriken knives, and can even pull the old Somersault Rainbow Shuriken toss attack.

In this game, however, Joe knows no dead ends. He can scale to new heights by rebounding off walls. He can also grab overhead structures for hand-over-hand treks. Musashi's ninja magic (called "Jitsu") will offer something old and something new. The fresh stuff are the Jitsu of Hakuriu, which produces a hailstorm of blue dragonstones, and the Jitsu of Kariu, which conjures up four spinning fire boulders. Other Jitsu powers are old friends: Ikazuchi creates temporary invincibility, Fushin gives megajump power, and Mijin turns Joe into a human explosion at the cost of one life.

Shadow Dancer ("Shinobi II") was a competent warm-up/sidestep, but Shinobi III looks more like what Musashi disciples have been waiting for since Shinobi: Revenge of the Ninja made its 1990 debut. Shinobi III appears to be a souped-up sequel in the style of the original classic Genesis game -- plus more! It looks like the Way of the Genesis Ninja will lie in Sega's direction.

The Neo-Zeed terrorist organization, led by the mysterious Neo-Ghost, is back, and more powerful than ever. Their foul grasp holds the world in a vicious stranglehold.

After vanquishing the Zeeds, Joe Musashi vowed never to fight again, but after witnessing their comeback, he returns. With a deadly assortment of weapons and moves, Joe attempts to free the world from this new evil. Shinobi 3 is the ultimate ninja cart. The action gets intense, but you have arcane magic and weapons on your side. It boasts a dynamic soundtrack and fluid animation. All of these features combine into an unstoppable, action-packed game!

Out of the darkness comes a powerful warrior cloaked in white. His glistening sword is poised to strike down all who oppose him. Who is this mysterious masked warrior? He is the Shinobi!

Take part in the latest sequel, starring none other than Sega's own super ninja! The action is intense, with more stunning graphics and orchestrated sound than you can shake a shuriken at!

You'll face martial arts masters throughout various stages of play. Your trusty katana is always ready and your fearsome magical power will send even your worst enemies fleeing in terror!

The true challenge of mind and body awaits all those who play Shinobi 3!

The way of the ninja is the way of Shinobi III. To master it you must possess great speed, a clear mind and, oh yeah, a Sega Genesis. How with seven levels ahead, you alone must face the challenge. And, in the words of the ancients, "May the wind carry your spirit..." Ah, never mind, just kick the bejeebers out of those bad guys.

The true Ninja Master has returned to the Genesis -- and it's about time! After three years of waiting for a follow- up to Sega's portrait in perfection, Revenge of Shinobi, Joe Musashi's finally back in the 16-bit saddle. The action artists at Sega of Japan have struck again, and Shinobi III is worth its wait in gold!

As usual, the Neo Zeed crime organization has resurfaced to cause more trouble, and ever-vigilant ninja Joe Musashi is on their backs like a Sega CD used to be on a Genesis. This time, the Zeeds leave Joe's girlfriend Naoko out of it and take over a city instead. While this may be bad news for the rest of the world, this is great news for video gamers!

You take Joe on a blowout, slash-and-shoot adventure through seven of the coolest- looking Genesis action levels ever! Thankfully, this game abandons the comparatively lack-luster game play of Shadow Dancer in favor of the classic Revenge of Shinobi style. Joe's a lone wolf in Shinobi III. His canine friend, Yamato, from Shadow Dancer Yamato, must have been rounded up by a dogcatcher. Boo hoo.

The Way of the Ninja

In this go-round, Musashi's armed with some new rump- roasting fighting techniques. Joe's still got Shurikens for long-range dicing and of course his Katana Sword for up-close slicing. His somersault leap and the rainbow Shuriken spray are as deadly as ever. New combat attacks include a dash-and-slash, a jump kick, and high-and-low blocking. The blocks add more skill and strategy to the fighting.

ProTip: You can block almost anything -- even laser cannon blasts!

Joe is also more maneuver- able than ever. Now that he can rebound off walls with his jump (a la Strider for the NES) and scramble hand-over-hand across overhead ropes and pipes, Joe seems more like one of those stealthy movie ninjas. The controls can be tricky, but the challenge of mastering Musashi's moves adds to the fun.

If all else fails, Joe's got one other slick but familiar trick up his sleeve: Ninjitsu (ninja magic). Fushin magic enables him to jump higher; Ikazuchi provides a temporary shield from danger; Kariu ignites everything on the screen; and Mijin sacrifices one of Joe's lives to damage opponents. The magic is a great idea, but it's an old one -- all the Jitsus are lifted from Revenge of Shinobi.

If you're about to perish when fighting bosses, always use the Jitsu of Mijin. You'll continue the battle from that point instead of having to start all over again when you die.

The Art of Ninja Fighting

Shinobi III blasts you through seven superb multi-scrolling scenes as you hunt down the Zeed crew. Terrific "layering" effects create that ever-popular 3D look. You fight across a forest, where enemy Shurikens mingle with leaves in the breeze, through a horrible lab that's home to the Zeeds' mutation experiments, into a fire- rimmed enemy encampment that resembles a scene from Apocalypse Now, aboard the Zeeds' spaceship, and more. One level in particular really grabs you, literally. Lurking in the shadows of Round 3 is a humongous slug that takes potshots at your hide with an on-screen missile sight that follows your movements. Later, you encounter this creature face-to-fang... and he's one ugly S.O.B.!

This game is long and satisfying. You encounter standard side-view fighting scenes, confounding mazes that require careful planning and backtracking, vertically scrolling jump-and-survive platform segments, and two all-new vehicle-style areas. You even ride horseback across a marsh as enemy ninjas drop like flies in Round 2, and you surf a polluted bay in Round 4.

If you see this dungeon In the Round 6 maze, you've gone the wrong way!

Like the rest of the game, Shinobi 3's enemies mix familiar faces with fresh blood. Out to use Joe's face as a cutting board is Zeed's squad of ninjas, corrupt samurai, machine gunners, mutant beasties, hovercraft, airborne assailants, and heavy-hitting bosses. Gruesome boss sprites, which range from big to stupendous, will give you video game nightmares!

Adjustable challenge settings affect your starting number of lives, the length of your energy meter, and the number of hits needed to kill enemies. These differences are fairly cosmetic -- there are no special endings or other rewards for playing the game on a harder level, unlike Revenge of Shinobi.

Despite the absence of Sega's master musician, Yuzo Koshiro, Shinobi III manages to surpass its predecessor in audio quality. The tunes range from soft, restful melodies to full-bore, thunderous tracks. Your only sound wish is for more songs, because the music starts looping about halfway through the game. The sound effects are so clear and distinct that you even hear the clomping of your horse's hooves!

From Japan with Love

Shinobi III proves that Sega of Japan is still on the cutting edge of side-scrolling excellence. This game plays as smooth as fine Asian silk. Like Sega superstars Montana and Musashi, this game's no ordinary Joe!