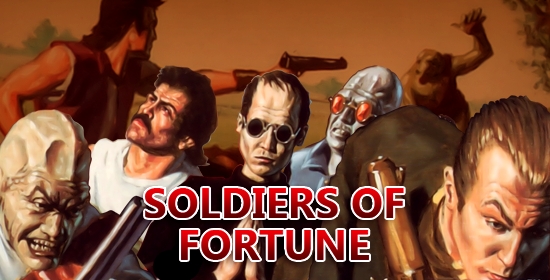 It's 1887 and the world is desperate to get real. The insane-in-the- membrane Baron Fortesque has built a reality-ripping machine called the Chaos Engine. Now dinosaur-clones, were-beasts, and other horrors stalk the Earth. Enter the Soldiers of Fortune to save the day in this fierce, run-n-gun action/adventure sci-fi game.

Have Guns, Must Travel

Soldiers of Fortune is a thumb-burning, 3/4-overhead blastfest that requires strategy as well as straight shooting. You blaze a path through aggressive beasts and goons across 16 bizarre landscapes. If you're familiar with the Genesis version, this game plays the same but looks and sounds much better.

Beating this tough-as-nails game requires teamwork, either with a friend or a computer-controlled compadre. You choose from six fighters-for-hire. Each mercenary is rated on speed and maximum health, and carries his own unique weapons.

Choose your team wisely, because the action is hot and heavy. Every World is populated with- Rock Golems, Lizard- men, and other two-legged monstrosities, who are armed to the teeth... or whatever!

Luckily, the controls are nimble. You can dodge shots and spin on a dime.

This game isn't all thumbs and no brains. Every level is laid out like a mad maze. You have to ferret out and activate several towers called Nodes to open the exit...then you have to find the exit!

Soldiers treats you to cool sights and sounds. The character sprites, such as the buffed goons and the giant disembodied hands, show off great imagination. The animation is fast -- ferociously fast for some of the monsters, like the tiny rat-things. The music stars among the sounds with fresh, pulsating rock tunes.

Lock and Load this Game

Soldiers of Fortune is a great- looking shooting game with a big-time bite. If you're into action with ammo, missing out on this game could be most un-fortune-ate.

When the going gets weird, the weird turn pro. In Soldiers of Fortune by Spectrum HoloByte, you lead a team of cutthroats- for-hire in a desperate mission to save... Reality! This tough-as-nails action/adventure game is a surefire blister-maker.

If you like off-the-wall sci-fi, the Soldiers story line will satisfy you. It's 1887, and the turn of the nineteenth century is taking a turn for the worse. In England, a Tyrannosaurus rex appears in a rock quarry. Half the residents of Bavaria become ravenous wolves. The newly assembled Statue of Liberty in New York starts stomping on citizens. The source of this mad attack on reality is a wacked-out machine called the Chaos Engine.

Enter six soldiers of fortune... and you! You must blast to the last through four deadly worlds in search of the Chaos Engine and its insane inventor.

Teamwork counts in this game. One or two players choose a soldier -- the Gentleman, the Brigand, the Scientist, the Mercenary, the Nawie, or the Thug. In single player adventures, the CPU controls the second fighter.

These dudes are bad to the bone! They each pack unique firepower and special wide-area weapons, such as bombs and 360- degree shots. Additionally, they're rated on attributes, such as maximum health, speed, and brains. You can upgrade these traits with the cash you earn by zapping monsters.

If you dig run-and-gun, this game grabs you by the barrel and doesn't let go. The action- packed game play features classic overhead-view fighting, using unlimited ammo to waste a crazy countryside. Until you reach the Chaos Engine in the last world, your goal is simply to find silver exit switches called "Nodes,"... and to survive!

It's much easier said than done. The labyrinthine levels can plunge you into a maze daze. A horde of horrific man-killers attack you at every turn. Stone Golems, muscle- bound Goons, Lizard men, and Robot Killers are a few of the nasties waiting to surprise you. Toss in spitting swamp plants, minivolcanoes, giant marsh frogs, and a flurry of freaks of nature, and you've got a mercenary-murdering mess on your hands.

You can out run enemy shots.

Don't worry. You can wheel and deal plenty of punishment to the bad guys, thanks to the simple, effective controls.

At least you have no problem seeing approaching doom.

The character sprites are small and the overhead view puts a bit of a damper on the detail. However, ace artwork offsets the pint-size pix and makes you long to see the creatures featured in larger scale. Moreover, the terrain and the Character Building screens sport terrific Victorian-age sci-fi flourish a la Jules Verne.

The sounds take their job seriously, with workman-like results. The music pumps a catchy techno-rock beat. The effects are few, but they rock and roll, too.

You can't shoot something that's off-screen, but you can't be shot from off screen either.

Let Your Fingers Do the Fightin'

Soldiers of Fortune wraps furious fighting in an interesting, unusual story line. If you like to look down on the action, this thumb-burner produces. It's a fun fight to the finish.

The creator of the Chaos Engine escaped from the Baron's dark cellars and revealed to the world the location of the Chaos Engine. With the world's arsenal in disarray, an elite strike force was necessary to infiltrate the area and destroy the foul machine. A group of mercenaries were called forth, each with special abilities and extraordinary qualities. These soldiers all swore to put a stop to the menace of the engine and free the world from its turmoil. Two soldiers could penetrate the estate grounds undetected and, with skill and a little luck, get to the cellars and obliterate the machine. Each soldier prepared his weapon and readied himself for the battle that could be his last. Two of them are going to enter the mad Baron's estate with the fate of the world in their hands.

They either destroy the Chaos Engine or die trying. You are that last hope.

A decent overhead-shooting game in the spirit of Technoclash and Gauntlet. Run around, blast enemies, and in huge levels too! This game may take several plays to get anywhere, but it is an enjoyable game.

True Lies
Take all of the action from the hit movie True Lies, subtract the romance, and you've got one of the most exciting games ever encountered.