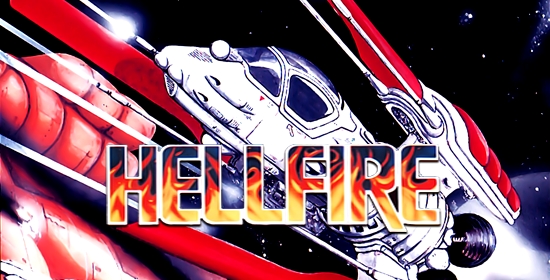 War of the worlds!

After 1000 years of peace, war was a thing of the past. That is until some very strange things started to happen. Scientists noticed that stars in the sky began to disappear! They soon found out that it was the beginning of the most powerful alien invasion ever. With the entire galaxy under alien rule you, singlehandedly, must infiltrate their defenses and destroy the source of power which gives the enemy their strength.

In Hellfire, an old Toaplan arcade game, you must shoot your way through 6 levels of side scrolling action in order to reach the alien's power supply. For weapons, you start off with a standard shot cannon, but by grabbing the correct power-ups you can increase your firepower fivefold! The direction of fire can also be selected from 4 different firing patterns. Add on a shield for protection, and option fighter to double your firepower, and you just might have a chance for success!

As your progress deeper into alien space, the ememy's number increases dramatically. In order to survive, you will have to maintain a high level of power as well as use the proper directional alignment for eat of the diffent threats as well as the right times to use the powerful HellFire weapon!

The aliens have taken over one of the our historic wonders of the ancient world! Clean up the desert and then proceed carefully into the depth of one of the crypths to their stronghold in King Tut's tomb! Can the HellFire fighter penetrate and complete this mission?

Adapted from a little-seen Toaplan arcade blaster, Hellfire introduces you to a galaxy filled with laser-spit-ting opponents bent on destruction. Through space stations and over alien worlds, Hellfire provides plenty of targets, both standard and Bosses, for your Hellfire gunship and its myriad of weapons systems. Yep, there's power-ups to increase weapon effectiveness and to increase your scores dramatically.

Hellfire is a quite enjoyable change of pace with enough originality (with the selectable weapons) to make it interesting. The graphics are fine and action are good, with the only shortcoming coming from the confusion that can ensues when changing weapons. Good fun!

In many respects Hellfire is as good as Gaiares but this soft is even harder. Too hard for my tastes but there are players who thrive on that. Great scrolling, plenty of fast action and good audio. Lose your power and you might as well restart the game - too hard.

Another great shooter to challenge your trigger finger. Hellfire is definitely the toughest shooter I've played on Genesis. Basically the idea is to keep your weapons at full power or you are dead meat. Excellent graphics and sounds and 6 extremely long and difficult levels.

Cool weapons, fast game play, and long levels. What more could a serious shooter fan ask for? More. Hellfire lacks decent end bosses and powerups. There is not much variety in this long game. Multiple endings do enhance it though. Hellfire is only an above average game.

The galaxy is under attack by a superpowerful army. The power source for your secret weapon has been taken and your people are defenseless. You must retrieve the power source and turn back the enemy which has taken over the six planets of the solar storm.

Based on an older arcade game, Seismic has converted it for the Genesis and gone one step better! In the cart version extra options plus a new 'hellfire' super weapon, which destroys everything in its path, has been added. It is an excellent side scrolling shooter with four different types of weapons. Each is instantly selectable with the B button and controls the direction of fire. As you progress through the stages you pick up additional power ups, each of which increases the destructive power of your weapon. Shields for defense, and a shadow ship also add to your weaponry.

Psychotic Aliens are Blasting You From All Directions!

Escape is nearly impossible, you feel the end is near. Don't worry, you wield the ultimate weapon "HELLFIRE"! This weapon will destroy any enemy in your path, but beware, your onboard supply is limited.

Don't think you can get out alive with blinding firepower alone, you'll need to utilize your four weapons with strategy and great prowess!

At least you'll look good as you go down in flames!

This conversion kit, a business choice that is gaining popularity with arcade owners hoping to save a buck, provides thrilling rapid-fire space confrontations with threatening alien craft.

Intruder Alert! The Earth is in the grips of an invasion of mutant life forms from another planet! Pilot your craft through 6 perilous levels of mad alien smashing action. Many other surprises!

Hellfire is a scrolling side-view shooter with all the elements that games like this feature, such as...

An overly dramatic game scenario. It's 2998 and the Black Nebula has begun sucking away star systems. The Galactic Federation's entire weapons' defense system has been taken over by an ominous force called the Super Mech, which controls the ever-increasing power of the Black Nebula. With the only means of defense destroyed, a dark cloud has literally been cast over the fate of the galaxy, and the Federation is helpless to do anything. But wait! In settings like this, there's always a...

Lone spaceship. You pilot a powerful starfighter, the CNCS1. Your mission is to infiltrate the six planets captured by the Super Mech and destroy the enemy's weapons in your quest to save the galaxy. Flying robots and other types of mechanical attackers swarm around your craft and fire on it. The CNCS1 shoots in four different directions of your choosing: forward, backward, up and down and diagonally in four angles. In video games like this, your firepower can be augmented by destroying certain enemy weapons that, naturally, release...

Power-up units. The CNCSVs laser shots can be doubled or tripled by picking up a specified power-up capsule. Other auxiliaries will increase the speed of your spaceship, provide a temporary shield or award extra lives or points. One even gives you a hovering robot that goes on automatic search-and-destroy missions. Then there are the hellfire blasts, which incinerate all alien weapons. Of course, you should have your ship's firing upgraded as soon as possible. Because at the end of every stage in a game like this, you always have to face a...

Boss enemy. This guy is the toughest of the tough, the baddest of the bad, the biggest of the big, and the one you absolutely have to defeat in order to advance to the next level. Most of the time, the only way you can defeat a boss enemy is by finding out its...

Achilles' heel. As a general rule, all superbly complex looking and seemingly powerful enemies in a video game such as this have a fatal weak spot. Finding and exploiting it is the challenge. There are six Super Mech bosses for you to defeat--and an additional number of "intermediate" ones to deal with as well.

The graphics in Hellfire are a little below the usual standard that Genesis owners have come to expect. The music tracks sound suspiciously familiar, as if they were lifted from other Genesis titles. Though this cannot be confirmed, it seems that a number of Genesis games share the same, fast-tempo bass rhythm in their soundtrack. Hence, the similarities in their music.

Game control proves to be a problem. It is too difficult to maneuver your star-ship with the precision needed, especially in the higher stages, while playing on the control pad. Hellfire requires an arcade controller in order to work best. Thus, the Genesis' add-on joystick not only helps, but also greatly enhances overall game play.

This game can't be praised for originality, but Hellfire does, at least, deliver the action. Many may not find this a good enough reason to buy it, but some will. After all, there has to be a reason why so many scrolling, side-view shooters are around.