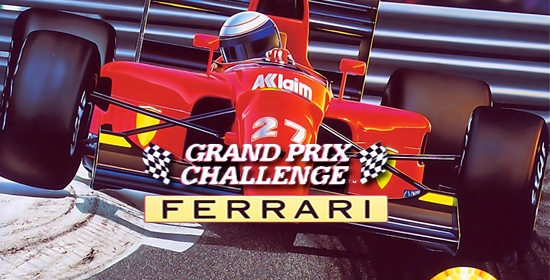 Acclaim's Nintendo racer is first up to the gas pump. One-player goes globe driving in 16 international Grand Prix courses. To win, you must speed past 25 opponents from eight teams. Capture the highest point total by circuit's end and the trophy's yours.

Your Ferrari's fairly well equipped with a rearview mirror, high-grip tires, and a radio, which your team uses to alert you to oncoming hazards. Choose either an automatic transmission for less complicated racing, or a 3-speed manual trans for a slightly higher top speed. Unfortunately, you can't upgrade your car's performance with new parts. As expected, applied here are the easy-to-use, standard accelerate, brake, shift, and steer controller moves.

At the start of each race, you drive a qualifying run to earn a pole position, and then it's off to the track for real speed. Win to score points for yourself and for your team, plus you'll get a password.

While your car's in decent shape, the courses it drives are less appealing. The scenery and sounds are just average and less stimulating than the tracks found in games like Rad Racer. Ferrari's strength is a lengthy, challenging contest. If your dream is to drive a Ferrari Formula One machine, a test drive rental is a smart move.

ProTip: Passing the computer can be tricky. It often swerves and knocks you off the track when you're making your move. Try a pass in the pit lane just before the finish line.

The brain train of Acclaim has been working overtime pumping out some new and exciting NES carts in recent months! Their latest entry into the bulging marketplace is Ferrari: Grand Prix Challenge for the NES. No need to go to Daytona for some hot racing action, the fun is stored in one little 4-Meg monster loaded with challenges.

The game starts as you enter your name and country. Then, customize your car's transmission for unique performance. Finally, get ready to race against some of the most radical drivers around the world! To top it all off, this is a password game, so you can stop at any point and continue later on! You are given driver stats, as well as constructor stats. Multiple tracks add to the challenge.

ProTip: A high-revving engine is too fast for beginners. Work your way up the parts ladder.

Ferrari's strength is a wealth of prerace customization options. You can ref it your car to pieces, and choose various Tires, Suspensions, Wings, Brakes, and Engines. Transmission types include four- and seven-speed, automatic and manual.

One-or two-players hit the world-wide tracks in a Time Trial or Practice Race. One player can also go for the gusto in the tough 20-course Championship circuit. Good luck -- the CPU drivers don't cut you any slack. You must cruise to victory in the Qualifying run to earn the pole position. Weather conditions impact the action, and you can chill in the pits between laps. Each win tallies points on the World Championship leader board and garners a password.

Despite some nice trappings, Ferrari trips on game play. The two-player, split-screen view is a great idea that fails in execution. The tiny squat car pressed against the warped, for- ward-looking view strains your eyes. The music's good listening, and the control is average. However, the graphically flat racing action doesn't come close to busting the adrenaline scale.

Ferrari Grand Prix is a long trip with a few rewards. Overall, this game gets the job done, but it could stand some retooling.

You participate in F1 races for the glorified "Ferrari" team. So that you wouldn’t mar her colors the game offers you, besides the basic mode "Grand Prix World Championship", the training mode "Practice Race". Do not ignore it; investigate the opportunities of the car, and your chances for the victory will sharply rise.

This time the view of the race is from the cockpit of car, which is better than the view from above. The options and the style are the same - real tracks and teams, although the names are again slightly changed; it is possible to play a separate race, to compete with the timer or to participate in the championship.