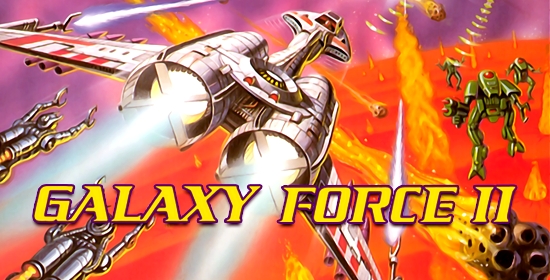 The future of the galaxy is in your hands!

Finally, a coin-op that most thought would be impossible to translate into the tiny brains of our home systems has found its way onto the Sega Genesis system. Capturing some of the most spectacular graphics (albeit minus the crystal-clear scrolling of the arcade version) of the quarter sucking original, Galaxy Force 2 is an 8-banger extraordinaire, with some fast paced shooting action and a myriad of weaponry that almost makes the odds even!

Launch your attack against the galaxy's latest threat - the Rounth Empire. These representatives of galactic evil have imprisoned star systems across the universe and, you guessed it, they now have their sights set on your home worlds in the Junos sector! With the fate of your people resting squarely on your shoulders, you must take to the stars and take out the enemy - one at a time!

The alien force massed against you is ominous in every sense of the word. From light snub fighters to heavy battle cruisers, the alien armada unleashed by the Rounth has only one directive: the total annihilation of the Junos people!

Each of the game's six levels of play presents an entirely new cast of enemy attackers as well as a separate backdrop for the action. Ranging from outer space to the lower atmosphere of your home worlds, these 16-Bit backgrounds present few dangers but are sometimes cool to look at. Don't get your mind off the war for too long, however, or you may find yourself (and what's rest of your fighter) floating home.

With little word of the advancing army, the greatest scientists of Junos put the finishing touches on your prototype fighter. Equipped with a dual pulse cannon and computer-aided missile systems, this new fighter was to be the pride of the Galaxy Force. Now pushed into active duty, you must not only take advantage of the incredible weapons of war at your disposal, but also special defensive systems that include a hybrid armored hull and plasma-based deflection screens. Both in combat and while traversing the corridors leading you safely out of each level of play, this shield will take that would send your ship across the universe in pieces. But look out, because once your deflector screens go down you're a sitting duck and one wrong move means the end of your flying days!

Although the Genesis version of Galaxy Force falls way short in the areas of motion control and scaling, not to mention a liberal loss of the detail that was so intricate in both the tunnel sequences and actual enemies, this lack of visual pizzazz doesn't destroy the overall enjoyment of the game. True, it's your basic first-person shooter, but the special features and interesting risk incentives combine with the all-out intensity of the action to give you a good idea what an all-out interstellar war would probably be like.

If you were a fan of the arcade title, don't miss your chance to give Galaxy Force 2 a spin at home. As long as you don't try to directly compare the complexity of the graphics and presentation, you'll probably find yourself enjoying the ride!

This is the easiest level, so you may want to save it for last. It is very important to have a lot of energy when you enter the canal on the conclusion of this round because it is very long and as soon as you come out there is a special control panel that must be destroyed! Try to shoot as many enemies that you can to replenish your energy cells - if you fail to you may not have enough power to best the next level of play!

This level has by far the coolest graphics. The fire effects in this round are completely awesome. Don 't let yourself get caught by all the good looks, however, because you're going to need sharp reflexes to take out the enemies. If you lose your targeting of the alien attackers your power will disappear in no time! Also, look out for the fire that shoots out from below, it leaves you with little time to react!

At the beginning of this level immediately hit the ground and take out the multiple enemy targets residing there to build up your energy. Also there are plants that will shoot at you from the ground. When they attack, target them with missiles and let 'em have it! Remember that the part that is bombed will come back, giving you the option of bombing it again! Use this technique to rack up a ton of energy upon completion.

This is the longest of the game's six levels, however the high volume of targets will award you with a generous energy bonus at the conclusion of the round. You may find that when you're flying, crystals pop up in front of your position. You must avoid obstacles such as these because they are indestructible. The easiest way to maneuver around these dangers is to stick to the closest side of the screen.

Undoubtedly the hardest of the five planets on which you can begin your battles. This is the best place to start since there are fewer opponents and, consequently, less energy to collect. Keep your sights honed and blast any alien that wanders by! Be careful in the canal, because the extra rock formations make the corridors some of the most treacherous in the game! Once you start bouncing off the walls you're history!

The backgrounds in this level can be extremely deceiving. The patterns will often give the alien army protection and allow their weapon blasts to blend in with the surroundings. With a variety of dangers to avoid, including poles and enemy fighters, and with no way to power-up your shields, the odds are definitely against you. Maintain a steady trigger!

While CSK is a new Sega licensee, the game carries a familiar title. With graphics that look more like an arcade game, the 8 megabit GF2 could quickly become the ultimate shooter! Look for Sega to grab the U.S. rights to this hot title!

Like OutRun, Galaxy Force 2 is a major improvement over the original SMS attempt. Good scaling, exceptional graphics and a deadline to beat make this a very difficult but challenging shooter. Worth looking for.

Galaxy Force II wowed our eyes and churned up our stomachs in the arcades, now it's ready to do the same on the Genesis. From a behind-the-controls first person 3-D perspective you fly your ship through five dangerous missions. One moment you're blasting your way through a rainshower of enemy ships in the depths of outer space, the next moment you're weaving through the tunnel-like 3-D mazes of a planetary space station. This fast action high tech space adventure is guaranteed to push your eyes and reflexes, not to mention your equilibrium, to the limit.

Galaxy Force II wowed our eyes and churned up our stomachs in the arcades, and now it's ready to do the same to you on the Genesis. From a behind-the-controls first person 3-D perspective you fly your ship through five dangerous missions. One moment you're blasting your way through a rainshower of enemy ships in the depths of outer space, the next moment you're weaving through the tunnel-like 3-D mazes of a planetary space station. This fast-action, high tech adventure is guaranteed to push your eyes and reflexes, not to mention your equilibrium, to the limit.

This smash hit arcade game from Japan has arrived in the U.S. In this futuristic space-fighter classic, players choose five different spacecapes through which to fly, ranging from fiery seas of lava to Milky Way style meteorite storms. To penetrate the heart of the enemy nerve center, players must guide their powerful craft through a maze of underground tunnels packed with deadly obstacles and enemy craft.

Space Harrier
Journey to the Fantasy Zone once again in the TurboGrafx version of the classic Sega shooter.