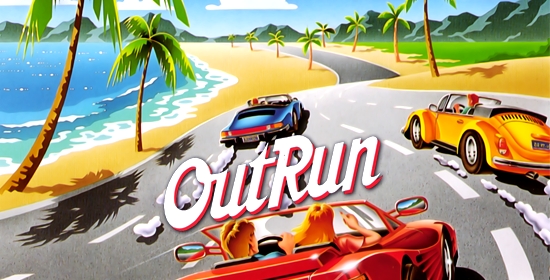 Outrun is an absolute arcade and Sega classic and one of the most important and influential arcade games of all time! Sega struck gold with this game and it is not just another racing game, this is a driving game. While this is a Sega arcade classic and it did feature on Sega’s home consoles, this game also made the jump to pretty much every home computer of the day too. The version I am giving special attention to is the one that was released in 1991 for the Sega Mega Drive/Genesis.

Outrun as I said is not a racing game, you are not racing against other drivers, instead, you are racing against time. The idea of the game is to make it to one of five different destinations before the time runs out. There are five different animated endings to get so there is a decent amount of replay value here.

One of the main things that Outrun is known for is the fantastic soundtrack. Letting you pick a song before you race is just so awesome and helps add to making you feel like you are driving a car. I think that the Mega Drive does a decent job of bringing that arcade soundtrack home, but I have to admit, I do think that the Master System version of the game has just a tad more charm in the soundtrack department, to be fair I played this on the Master System first so that is perhaps why I feel that way.

I cannot overstate enough that this is not a typical racing game. As you race, you will come to forks in the road, you can either go left or right and each way will take you on a different road. Ultimately, there are (if my math is correct) 17 different roads/tracks for you to race down as you make your way to one of the five different ending points. This can be a very challenging game, it is way harder than you would think and while it is the kind of game that is fun to pick up and play, there is still a lot of skill involved here. You can drive automatic or manual transmission for a bit of added variety and challenge if you like. I think that they did a great job in replicating the arcade version of the game on the Mega Drive/Genesis with this port.

Not Quite Arcade Perfect

Look, Outrun on the Sega Mega Drive/Genesis certainly looks better than the Master System version. They do a great job of conveying speed and I like how there is this kind of 3d effect going on with the scaling. People who played this on the Master System and then saw it on the 16-bit Mega Drive will no doubt see that extra horsepower, still, Sega’s arcade games of the 80s were very technically advanced so they were not able to make this quite arcade perfect, even though it was released many years later.

I love Outrun, I love it so much that I have the Arcade 1Up Outrun arcade machine in my game room. This is just an absolute arcade classic and it was released at a time when Sega was at the absolute top of their game as far as their arcade games went. I think that this 16-bit Sega Mega Drive/Genesis version is a damn fine port and I would go as far as to say it is one of my favorite games on the system!

The classic arcade racing game is back in 8 meg, 16 bit form! Just like the coin-op!

One of the best auto racing games of all times is coming to the Mega Drive in 8 meg form. The choppiness and problems with the SMS version are gone and all that remains is the spectacular game as it should have been originally done.

Race across varied terrain in this conversion of one of the most famous arcade racing games. Your Ferrari is at the ready, complete with female passenger, over a series of short tracks.

Gameplay is viewed form just above and behind the car, so you can see it. The roads are full of sharp bends and hazards, contact with which can cause the car to roll and lose you time. On each section of track there is a fork in the road, allowing you to choose which direction you go in. You have to complete 5 track sections in total, out of the 15 in the game.