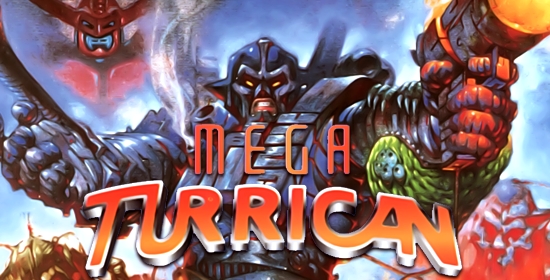 If the Shoot Fits

You're Bren McGuire, a Freedom Forces fighter who answers the desperate cry for help from a young girl, whose planet is being overrun by the Machine. Don your Turrican Assault Suit and charge headfirst into battle.

ProTip: To destroy the World 4 Boss, use all your Smart Bombs, then jump and shoot at his exposed face.

Your Turrican is equipped with a gun and a Plasma Rope. The gun can be powered up to a Multiple Shot Cannon, an armor-bustin' Laser, or a Rebound Gun, which fires shots above and below you.

Why the maximum artillery? Because the Machine isn't kidding around, and it's guarded by deadly robots, electric eels, Turrican-crushing machines, and more. You weave through a bio-lab, an underwater mutant factory, a desolate war-ravaged landscape, the Queen's Alien dungeon, and finally to your battle with the Machine.

World 3 is chock-full o' bosses. The best remedy is to use your Smart Bombs right away on the bosses, and then shoot. To knock off the last boss, aim for the crane.

The graphics in Mega Turrican are sometimes hard to see, sometimes repetitive, but never slow. The bosses are big-screen hogs, and some of the levels (like the Alien Dungeon) are very nicely drawn.

The sounds and music are topnotch, pushing the envelope of the Genesis' sound capabilities. Every blast, every explosion, and all weapon power-ups (which are announced by voice) are sure to rock your speakers.

The controls are primo. Since the game automatically switches weapons for you every time you pick up a weapon sphere, all you really have to do is shoot and avoid obstacles. Using the tricky Plasma Rope takes some practice, but you really need the Rope to find hidden areas and power-ups.

Jumping on the Alien egg pods will destroy them quicker than shooting them.

Mega Turrican lays down mega-action, even though play-through should be a mild task for intermediate gamers. The bosses never really pose much of a challenge, and the screen-clearing Smart Bombs make short work of the levels.

Just stay on your toes, keep the pedal to the metal and your rendezvous with the Machine will come quicker than you cared for.

Here it is - chock-full of explosive graphics and equally stunning sound effects. Oh, yeah... there's enough action to glue you to your seat.

As Bren McGuire, leader of the United Planets' Freedom Forces, your sole mission is to keep galactic peace. However, on this day harmony's not part of the picture: Your arch-nemesis, the evil "Machine", has reappeared. That's right, the evil force you thought you destroyed years ago is back with a vengeance. Same picture, different game - you must find the Machine and crush it.

Mega Turrican is a shooter with lasting power. Don't expect to finish it in a sitting - not with 15 horizontally and vertically scrolling levels to explore. You've got a bunch of weapons and gadgets at your disposal, and you'll need every plasma-rope and energy wheel if you hope to survive. Hold on!

Eons have passed since mankind last heard of the evil machine. Now, after hundreds of generations, the forces of evil have assembled once again. In a sweep of terror, the evil machine has destroyed many planets and has enslaved millions of people.

The only thing that stands in its way are the USS Freedom Forces. Led by Bren Guier, they will try to save the lost souls. He slips into his Turrican assault suit and launches himself into the ultimate challenge. It is up to you to take Bren through this, and save the universe. This game has a lot of different weapons and modes of attack. So suit up and get ready, this is a blast!

In future the humankind and almost all alien races decide to make peace agreements but aliens could be very cunning and hypocritical. For this reason the special armor Turrican is designed and manufactured, capable of turning a common human into the killing machine. Soon one of the most powerful races violates the treaty and attacks again with new force leaving captured or destroyed planets behind.

Now it is human’s turn. Time has come to put on Turrican. Bren Guier, USS Freedom Force executive, was chosen as the one to stop evil aliens… So 13 ultra difficult levels with a big, no Huge, boss at the end of each.

A 100 % adrenaline full action with lots of weapons and foes, perhaps the best game of its genre. So shoot to your heart’s content.

Doom Troopers - The Mutant Chronicles
Based on the popular role-playing and card game, Doom Troopers casts you as a fearless commando who's been commissioned to save the world from an invading force of mutants.