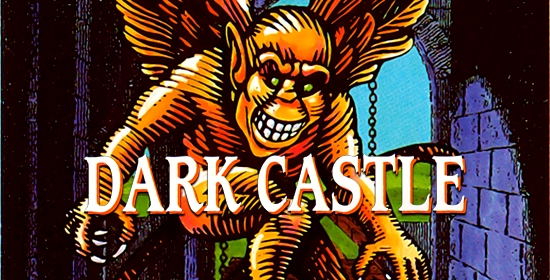 The Black Knight has brought misery to the land, and the end way to end this is to enter his haunted house to slay him. You are the brave adventurer taking on this quest through 14 increasingly-tough zones.

Somewhere within the Dark Castle of Brightland, the Black Knight awaits. And as the bravest adventurer in the the land, it is up to you to confront him. Yet before you can realize your goal, you must first ensure that you have the necessary equipment to defeat him. This involves completing three quests to prove your valor: Guaranteed Trouble, Fireball Warehouse and Maze to the Shield.

Choose which quest you want to embark on from the castle's Great Hall, but choose wisely -- you may need one of the items in another quest to help get you through the rooms that follow. Play involves figuring out certain puzzles within the fourteen rooms inside the castle, all while fending off rats and bats looking to do you in.

Your character is not without protection, however. Players will be able to throw rocks at different angles (which turn into fireballs after completing the fireball quest), gather elixirs to replenish health, and jump from platform to platform to avoid dangers. Three difficulty levels will determine the number of lives you have at the beginning of the game, so find the right setting and challenge the Black Knight!

The bulk of the game is side-viewed, involving single screens to pass through, which incorporate ropes, cages and trapdoor. There are enemies walking, flying and hovering through this, and many of them respawn. Unusually your weapon to take them on (rocks) can be thrown through 360 degrees, which aims to make the gameplay more realistic and methodical. The screens were linked by hub screens, which the player passes through simply by clicking on a door.

Castlevania - Bloodlines
Interesting level design, different monster creations and the same game play we have loved for years makes this one a no-brainer.