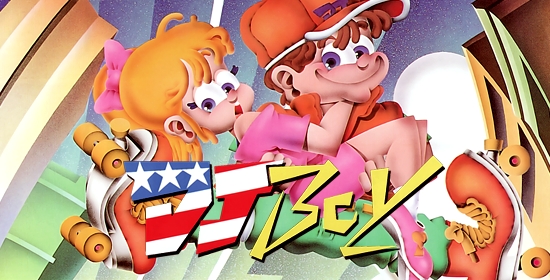 Welcome to Cigaretch City! It's a nice place to visit, but you might not want to live there -- that is, unless you're a fan of Rollergame. Rollergame involves strapping on a pair of roller skates, in this case the skates of D. J. Boy, who tours the world as a roller fighter. Now he's ready to take on the Dark Knights, reigning champs and bad creeps of the Rollergame scene.

D.J. Boy, based on the arcade game of the same name, features six rounds of hard-hitting, hard-skating, horizontally scrolling, one player action. The object of the game is simple -- survive to the end and crown yourself Rollergame champ. Play is based on the "damage" system. You've got one life to live, until you can purchase a 1-Up, and your life is over when your life meter reaches zero.

All the skating takes place in Cigaretch. Skate down the different city streets, along Casino Row, on top of a building under construction, and even through the sewer. Each round features different obstacles and adversaries, from Round 2's cones and cannon balls to the exploding clowns and unicycle patrols of Round 3.

You'll have to look sharp to maneuver through each round. Besides the ability to skate in all directions you can also punch, kick, jump-kick, and kneel and punch in two directions at once. The jump-kick is your most powerful move.

Along the way you'll literally run into the Dark Knights. Each member of this motley crew packs an unusual punch and a different move. For example, Honey looks sweet, but she'll toss deadly bombs in your direction.

At the end of each round some of the wildest bosses you've ever seen on a screen are waiting to beat you and it takes a unique strategy to beat each one. At the end of Round 5 you'll have to fight each of the four bosses once again!

During each round you'll earn coins and points by beating the different gang members. The only power-ups available during the rounds are a few burgers for extra energy.

This guy often carries a tasty Hamburger that'll max out your life meter.

If you beat the round boss you get to take your stash of cash to the store to stock up on power-ups. Goodies for sale include Hamburgers, super fast skates, speedy punches and kicks, extra punch and kick power, a protective helmet, and 1-Ups.

Save your cash for burgers and 1-Ups.

Let's Hear It for the Boy

D.J. Boy is Kaneko's first title for the Genesis, and it's a winner. The arcade style action and amusing graphics make for an entertaining time. A minor complaint -- the rounds are uneven. That is, the bosses are tough, but the rounds themselves are easy. You work hard to figure out how to beat a boss and then breeze through the next round, only to get stuck at the next boss.

If you're looking for arcade-style thrills and chills, D.J. Boy keeps you rolling along.

Kung-fu on wheels. Combine the popular sport of roller skating with martial arts and you get DJ Boy. Based on the arcade game of the same name, DJ Boy has you skating down the streets of the city in search of your kidnapped girlfriend. All of the thugs you run into are also on wheels but with your special punching and kicking skills you are more than a match for any enemy. Take the money you get for beating your opponents and buy better equipment at the item shop.

Another great coin-op conversion. The best description for this cart is "Double Dragon on skateboards". Battle your way through streets and buy continues in this all out street fight!

Recently unveiled as a new arcade game by American Sammy, this new Sega 16-Bitter combines elements from many different proven play themes that range from racing games to Double Dragon. The main portion of this fighting title incorporates techniques made popular in similar action contests, and blends it with a unique mode of transport right out of a roller derby.

DJ Boy stars a super hero clad in roller skate who must scroll his way through multiple levels avoiding and attacking a wide cast of nasty characters. A large variety of offensive and defensive maneuvers are always at your disposal as you work your way through the neighborhood.

A local tough has kidnapped your girl, and he's getting away! Can you fight your way through his goons, catch up with him, and save the day?

DJ Boy is a side-scrolling combat title, where you, as a DJ, try to fight your way through an underground city in order to make yourself known as the top dog of the town!

3 Ninjas Kick Back
You must help an old samurai to retrieve a dagger he once got as an award for his achievements in martial arts.