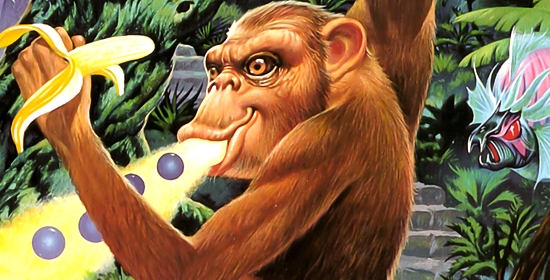 Last issue you we went primal with the NES version of Toki. This time, we're taking a look at Sega's 16-bit rendition of this monkey adventure. It's coming at you complete with a jazzed up title -- Toki Goes Ape Spit. But first, here's a quick refresher.

You, a nameless hero, have been dissed by a wicked Sorcerer, Vookimedlo. He's run off with I your lady, Miho, and he's used a bit of fancy magic to turn you into a monkey.

ProTip: Don't be frightened by these floating spikes. Simply crouch down, stay in a squatting position, and walk across.

Off into the wild blue, green, gray yonder, there's no rest for the weary monkey! You face six multi-part levels, where you venture through surrealistic jungles, mountainous peaks, and the watery depths of an eerie lake.

You aren't revered like the "sacred" Balinese monkeys, but you do have a wicked talent that's guaranteed to make anyone stand up and pay attention! You can breathe fire and do it in a variety of ways. Your breathe ammo starts off weak. However, you can grab icons for bigger, badder power, which include multiple shots and ricocheting orbs of heat.

Although the action in Toki GoesJ Ape Spit is far from fast and furious, it's intense enough. Each level is split into two or three different parts, and you never know what's cornin' round the corner next! If you're set for a little monkeying around, pay a visit to the primate section of the Genesis game department.

Other Games by TAD Corporation