Phantasy Star 4 - The End of The Millenium 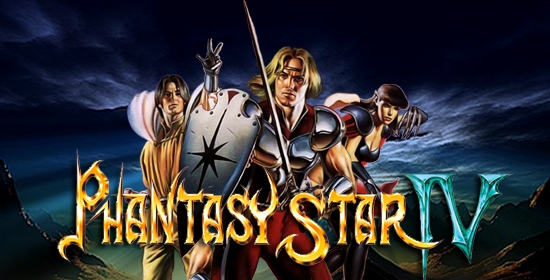 Look all you want, but don't touch. That's what most role- playing video game backdrops are like: Handsome cardboard cutouts that offer little more than a facade for the characters to stand in front of.

It's here that Phantasy Star: The End of the Millennium makes its real breakthrough. It's the first console-specific RPG to bring its fantasy world to life.

This Game is Gear

So, for instance, if your party (up to five members) visits an inn and checks out the cabinets on the rear walls, they find bed linen or cleaning supplies. If you go into a house, you can inspect the shelves and find a range of books.

Visit the kitchen and get commentary on the state of the family's housekeeping. At one point, you even stumble across a Game Gear!

And that's just for starters. This feature is delightful. Even if many of these touches are in the name of local color (some are directly tied into the game), they help an otherwise ordinary Phantasy Star episode come to life.

This fourth entry in the long- running RPG series isn't all that different from the games that preceded it. In a way, that's good, because you know the background and the local lingo from the start (remember Trimate, Telepipe, and Escapipe?).

Phantasy Star phanatics should jump on this game, but you could definitely make a case that the routine's getting old. Once again, you're in a troubled land (Motavia) that's overrun by monsters (who all happen to carry the local currency around with them), you're nudged from town to town by the story, and you face a new villain (Zio) with an old philosophy (destroy everything).

Get the impression that the Phantasy Star saga could use a little shot in the arm? Well, it got one, and the fourth episode offers some nice touches.

The story sequences that appear at important junctures nicely punctuate the plot. The missions offered by the Hunter's Guild make an ordinarily linear game much less so.

The controls offer a few impressive features. The incessant combat can be handled more deftly with macros, which enable you to define eight sets of the commands for the full party and choose among them at the press of a button. The Talk option brings you up to date on your immediate mission in surprising detail.

Still, a few areas could stand to be improved. The translation from the original Japanese is very lively and western in tone. But the story continuity falls down a bit in places, usually during the linking segments. After moving from one scene to another, you may occasionally find yourself hard-pressed to understand what just happened.

Also, it's pleasant that the featured player in the first stage of the game is a woman (a hunter named Alys), but it's not so pleasant that she gets killed off early on and the many male characters respond primarily to her physical attributes. (At one point, a character even starts reading off her measurements.)

The shop menus still don't permit one-stop purchases of multiple items. That is, if you want 20'Monomates, you're going to have to trudge -- through the menus 20 times. As it is, the menus involve one more button press than; they really should.

And the intro-just static, graphics with scrolling text -- is downright pedestrian. Phantasy Star IV is the latest installment in the mother of all Genesis RPGs, yet it never gives you the sense that you're about to embark on something special.

Ah, but you are! In the end, End of the Millennium is amazingly rich in detail that will keep your TV screen bright as you explore everything and everywhere long after the rest of the house slumbers.

It has been over 1000 years since Dark Force and Mother Brain attempted to control Algo with its weather control system. Since then, a new threat is growing on the planet Motavia. Bio-Monsters, which normally stay outside the cities, start appearing within the Motavia Academy in Piata. The Motavia Academy is a college where young minds reach higher levels of education.

Two mercenaries named Rudy and Leila must seek out this mystery and put a stop to the force behind it. For those who don't remember the first article we ran on Phantasy Star IV for the Mega Drive and Genesis, check back to issue 42 where we first showed some terrific scenes of the awesome RPG! In part 2, we'll discuss the changes made since that issue, plus show some first- hand pix of what promises to be the hottest RPG of 1994!

The PS4 development team has really been crankin' since we talked with them last. Not much of the story-line has changed, but there are a whole slew of new pictures plus a more in-depth interview with the Phantasy Star Team.

The game begins with two main characters that you will have full control over throughout the entire game; Rudy, whom we talked about last time, and a new character named Leila, a feisty young female warrior with incredible skills. Other new additions to the cast include an unnamed character with telekinesis abilities and a more advanced version of Nei (from Phantasy Star 2). You can have a maximum of five characters in your party with a total of 11 characters that will have come and gone. This game is definitely no slouch when it comes to size! PS4 is three times bigger than PS2 with many new planets and moons to discover before you can finish. There are also over 100 breeds of both Bio and Mechanical creatures to do battle with. Collecting experience points and Meseta are also still a big part of the game.

Combat has been modified to the old way like Phantasy Star 2. You will get the same view of the back of your characters, but the background won't be a simple, blue grid. The backgrounds will be extremely colorful and will change according to the landscape of where you're fighting! None of the fighting scenes are shown due to the game being so early.

The towns have been changed a bit too! In some cases, you may actually fight in the towns! The first example is in Piata where you must venture through the labyrinths within the Academy to destroy the Bio-Monsters which inhabit the halls. Also, there is more interaction with townspeople so learning important information is even more taskful. There are a variety of shops in each town like weapon depots, tool shops to stock up on magic, and inns for when your group needs a restful nap and hit point recovery. Remember the teleporting system used in PS2 to zip to and from various towns? A new method of transportation will be used but no details were given away just yet.

Phantasy Star 4 is shaping up to be the best Sega RPG ever! Although no definitive release date has been set, they are planning on a 1994 release and are aiming for 16-Meg, maybe more! So stick around, because there may just be more interviews as more exciting information comes our way!

Here's some more news of that hot RPG from Sega. I played it for quite some time, and got really involved in it. The plot is intriguing, and you'll be thrust through it at lightning speed. It seems that Leila, your partner is a bit of a mercenary. So much, in fact, that she won't go with you without money! Soon you'll be joined by Han Murray, an assistant at the academy, which has been overtaken by bio-monsters. When you go find the cause, you come to the shocking realization that the monsters were put there by a field research team. Now the adventurers must somehow find the researchers, and find out their motives. It's exciting!

Yes, Star players, Phantasy Star IV is on its way! Once again, the menacing Dark Force has shattered the silence throughout the once peaceful land!

The quest is set in a futuristic setting in the year 2284, similar to Star II. You will adventure across new planets and meet up with more enemies than ever before!

Solve the mystery and stop Dark Force before he gains control over the world!

It has been over 1000 years since Dark Force and the Mother Brain attempted to control Algo with its weather control system. Since then, a new threat is growing on the planet Motavia. Bio-Monsters, which normally stay outside the cities, are appearing within the Motavia Academy in Piata.

You begin as a character named Rudy with the help of Leila. She will aid you in your adventure as well as others who you have to find in order to join your party. You and your party will explore many planets in order to destroy the evil that has plagued the lands. Masses of monsters will try to destroy your destiny.

The epic struggle of good versus evil continues in Phantasy Star IV. First there was Alis in a quest to free her land of the many terrors that roamed free. Then it was Rolf, a government agent who was to find out what was wrong with his planet's computer, Mother Brain. He and his party were pursued as criminals by robotic hunters, as well as vicious Bio-Monsters. The third installment in this epic series was so large that it spanned three generations! In that quest, the family line of heroes joined forces with the cyborg Wren, and many others to stop the most hideous source of all evil: Dark Force. The Dark Force was seemingly destroyed, but was it? Our new set of heroes will travel through several immense worlds each with several continents. The battle scenes in this version are like the second, as is most of the quest. This game is bigger than all the ones before it. The extra memory will also allow this version to have more animation, better music and a much longer quest.

It's the game that every serious RPG player has been waiting for, and it's on the way. Phantasy Star IV: The End of the Millennium is going to knock the socks off even the most die-hard RPG player!

This series goes on longer than a Congressional hearing. You'll live, die, be born again, and even marry -- and that's not the half of it. But Sega claims that this game is the final game in the series, so you'd better enjoy it while it lasts.

If you're a fan of the other games in this series, then you know all about the story line. If you didn't play the earlier games, go out and get your copies now. You'll be transported instantly into another world of magical bio beasts and fantastic mech magic.

Shining in the Darkness
Vanish the fiendish forces of Dark Sol and restore peace to the enchanted Kingdom of Thornwood. Search for the powerful Arms of Light and fight the savage creatures that roam the darkness of the Labyrinth. Use your warrior's skills and cunning to pass the test of the Ancients and become a shining knight.

Ys 3 - Wanderer from Ys
Y's 3 continues the adventures of Adol, the legendary hero of Y's. Adol must once again rescue the people from turmoil.