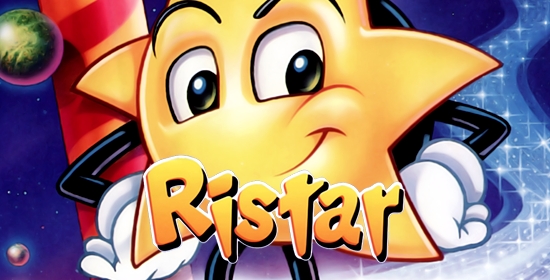 Ristar's a yellow star who's trying to save his world from destruction. The hop-n-bop platform game play is surprisingly excellent.

At first, Ristar's action seems pretty standard. Ristar runs, climbs, and swings across six rounds of play. A few variations rev up the action, including Ristar's ability to grab hostile aliens and items with his arms.

With one button to jump and one to move his arms, Ristar is easy to control. His movements are also tight and precise.

The graphics shine with brightly colored cartoon-style animations and clever backgrounds and enemies. The tunes rate above average.

Ristar is a good game for the Game Gear. It's thankfully not Sonic, but looks just as good. Ristar adds a bit more technique to the genre. At times the action is hard on the eyes, but the colors and larger characters help it out a bit. It's a fun game to play, and remarkably it controls pretty good The audio is standard Game Gear fare, and is best left turned down. This is yet another decent GG cart.

This Game Gear version of Ristar loses practically nothing from its 16-Bit counterpart. The graphics and levels are, for the most part, identical. The amount of technique needed for each level is high, making Ristar more interactive than Sonic. Colorful and vibrant levels are a mainstay of GG games and Ristar doesn't hold any colors back. Another enjoyable Game Gear title.

Ristar for the GG follows in the footsteps of its 16-Bit counterpart as a portable that keeps the system above the rest. Like the Genesis version, this portable employs a new technique that enhances the game play above most platform games. As far as looks, the graphics are top-notch. GG music was never appealing, so I can't say much about it for this game. It's a good game!

I enjoyed the 16-Bit version even when everyone else was saying it's too similar to Sonic. Once again. I can't help but be taken in by the cute, little star and its bouncing action. The colors and sounds are good for a portable and the new rubber band arm techniques make it fun to play. Good game play and controls add to the enjoyment. This makes a great companion for some portable fun.

Ristar's special skills are plenty of reason to get your Game Gear out of the closet and back in your hot little hands. Even though the sound does have a lot of that annoying beeping quality, the game play makes this a great choice for the small screen.

Here we go again! This time, the mascot-to-be is this little star with ape-hanger arms that he uses to swing around on and grab stuff with. He's kinda cute, but aren't they all? This game is fun, so maybe you might warms give it a try.

Sega's latest character, Ristar, is yet another attempt to relive the whole Sonic phenomenon after its last mascot, Dynamite Headdy, failed to become a household name.

Unfortunately, Ristar probably won't set the video game world ablaze either, although it, like Dynamite Headdy, is a lot of fun to play.

Just as Sonic has his spin and Headdy has his multiple heads, Ristar also has a unique physical attribute - his arms. He can stretch them out to grab enemies, use them to climb walls, swim like a sub, and even swing around like Tarzan. The action in the game is carefully planned around these abilities, so the player is forced to think about each situation in a new and creative way. The stages themselves offer a lot of variety as well, with new and innovative challenges around every corner.

The problem for Sega is that players just aren't interested in the whole 'cute mascot' thing anymore. Even Sonic has begun to slip a little. I guess after you've ripped a few heads off in Mortal Kombat, those smiling, cute stuffed animals just don't appeal. Still, Ristar is a very good game, and it would be a shame for any action fan to miss it. So whaddaya say? How about putting the axe down for just a minute, maybe?

The Long Arms Of The Law:

Ristar shoots off the screen and makes you long for the days when cute mascots were cool and country wasn't. However, side-scrolling platform games are getting tired, no matter how fresh and exciting they are. Ristar is a great game - fun, challenging, and (unfortunately) cute. So, if you can't get enough cute games, or if you just love stars, then Ristar is the ride you want to catch. But if you're sick and tired of Sega's Sonic clones, quit buying 'em, and they'll stop making 'em. - Mike

Although he's no threat to a particular Sega star who hogs the limelight, luscious graphics and a healthy dose of good old-fashioned hop-n-bop platform action make Ristar an up and comer in the video game heavens -- at least for beginning players.

So You Wanna Be a Star

Yet another alien being has invaded an innocent planet, and this time it's Planet Flora. You play as Ristar, a valiant, young... er... star-literally. Another cutesy little vie character, Ristar strolls across each planet, using his repertoire of special moves to free the brainwashed inhabitants.

Each of the seven planets that Ristar travels across has unique obstacles and enemies, such as Undertow, an underwater world with strong currents and deadly projectile-tossing lobsters, and Sonata, where the instrument inhabitants are less interested in making beautiful music than in drumming you into the ground.

In a variation on the standard hop-n-bop theme, Ristar grabs and tosses enemies with his extending arms. His other gymnastics include swinging around poles, scaling ladders and walls, hanging, and swimming. When he locates special Star Handles, Ristar revs up and shoots across the screen in an invincible Meteor Strike -- often straight into special bonus rounds. The moves are simple one-button controls -- easy to manage and precise. The only complaint is that Ristar feels a little sluggish in comparison to lightning-fast characters like Sonic and his new buddy, Knuckles.

Ristar's an extremely colorful game, with cartoony visuals that include clever enemies and backgrounds rich in detail. Ristar's animations aren't as plentiful as other current platform stars, but he's a comical enough sprite. The tunes are standard video game fare -- original for each level and accompanied by cutesy sound effects, but nothing special.

Despite great looks and clever game play, Ristar's no match for experienced players. Playing at the toughest difficulty setting, veteran gamers won't even break a sweat until the last levels. Nevertheless, it's entertaining enough to be worth playing through once. Ristar won't be the supernova in this year's galaxy of games, but it's a good choice for less experienced star gazers.