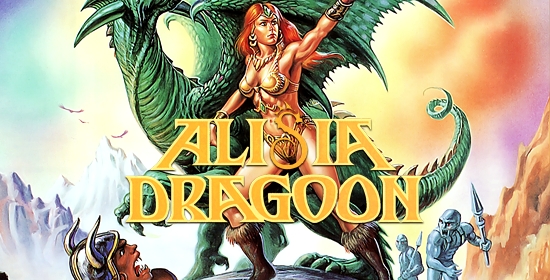 Alisia Dragoon is just another one of those 90’s platforming games that gets a lot of side-eyed looks out of people when its mentioned. Specifically, nowadays, it’ll be rare to find a gamer under 25 that knows that this title is. However, there’s a good chance that you’ll run into someone that perks up their ears in response to the title and be flooded with memories of the platformer alongside similar titles like Light Crusader and Alien Soldier. The gameplay is an unforgiving experience, as most games of the time were, but it is a true experience into what a simple game like this can become given enough dedication. If you’re up for a new, challenging platforming experience, Alisia Dragoon is waiting, and it can’t wait to give you a run for your money with a bit of frustration.

So, what exactly did I think upon booting up Alisia Dragoon? Gameplay and story aside, I was pretty psyched to learnt that not only did I get to use a lighting/thunder attack as a basic attack, I was also granted a pet dragon that can deal some damage too. I was immediately sold on this alone. The story from here is almost impossible to glean without looking up the original instruction manual, but its nothing complicated. Alisia is the daughter of a sorcerer who attempted to take down the evil wizard, Baldour, but failed and was tortured in front of Alisia.

You’re now tasked with tracking him down and beating the snot out of him using Alisia’s thunder magic. Just like most other games of the time, you’re dropped right into the action without much direction other than ‘destroy everything in sight’ as you begin to mash an assortment of buttons without a care in the world. Generally, its tough to say that the story was bad – its just not an integral part of a game like this and you shouldn’t go into this expecting anything beyond a simple plot. With this in mind, the gameplay will make up for this and hold its own quite well in the absence of complex writing.

Controlling Alisia is rough to say the least. Alisia Dragoon isn’t exactly a ‘floaty’ game, but doesn’t quite have the precise control that similar titles have (namely Castlevania comes to mind). Regardless, each level is well thought out, the controls to take down all enemies on the screen are tough to master though fun to toy around with, and everything else runs pretty smoothly. In fact, the graphics and sound design are fantastic – they create a medieval/mythical hybrid atmosphere with each level’s soundtrack and combine it with detailed enemies, backgrounds, and animations. Easy to enjoy and well worth taking a second just to admire before resuming the carnage after completing each stage. Finally, the game is flat out hard.

Stages are long and come with a variety of enemies that swarm the screen. Your only saving grace, especially until you reach the pattern-dominated boss stages (which ultimately are easy once you know this pattern) will be the various power-ups that drop for Alisia. Until then, good luck.

Another great platformer that often goes unnoticed today due to its limited sales. Great challenge, design, and soundtrack overall with a decent/coherent plot to boot. Perfect for any platforming junkies.

Alisia Dragoon is Sega's newest action game available for the Genesis! You play the part of Alisia and you must destroy the evil beings infesting your land. Shoot lasers from your hands to wipe them out! Featuring some of the best graphics and animation yet, this 8 meg wonder is on it's way from Sega!

Somewhat similar to the popular Valis series, Alicia has you exploring numerous lands in search of the magic crystals which have been stolen from your kingdom. Your magic is powerful and you'll need it as the enemy warriors are strong and attack relentlessly.

Unless he is stopped, Bal- dour the prince of evil will once again awake from his state of dormancy, descend upon Earth, and relentlessly terrorize all living creatures. Only one woman can put an end to Baldour's reign of terror -- Alisia Dragoon!

Alisia's gathered together a band of fighting Monsters. With them by her side, she sets out to find Baldour's cocoon and destroy it before he stirs from his sleep.

Alisia Dragoon is one of the finest looking Sega products of the year. Seven rough- and-tumble stages, and the final faceoff round with the supreme dirtbag himself, Baldour, keep Alisia and her monsters up to their eyeballs in action.

Other tasty power-boosters include: HP Ups which increase the number of hits Alisia can take; icons that provide her with temporary invincibility; and Potions which restore her life meter.

ProTip: In Stage 2, make your way to the third staircase. Before you descend, jump over to the ledge on your immediate right Move along this passage until you hit an area with gray stone columns. Jump up to land in a secret chamber that's filled with goodies.

Alisia's monstrous companions each have their own unique fire power. You can call upon a Monster whenever you choose, or you can travel alone. Monster's are accessed via a menu, which appears in the far right comer of your screen.

Although they never stray far from your side, Monsters march to their own drummer by flying around and launching attacks at will. At times, Monsters will even jump right into the line of fire. Unfortunately, they aren't impervious to damage. In fact, they can be fatally wounded. It's up to you to build up each Monster's Hit Points, as well as distribute life-restoring Power-ups to them.

If you blow it and one of your Monsters bites the dust, all's not lost. If you're lucky enough to find one, you can revive a deceased beast via Revive icons.

Alisia Dragoon is one monster party that Genesis players won't wanna' miss. It's loaded with all the good things you want. You can expect handsome graphics, responsive game control, and thumb-burning challenge. Go ahead, behave like a monster. Alisia will love you for it.

This unusual title features action/adventure style gaming starring a heroine -- Alisia Dragoon. Alisia's palace is attacked by marauding monsters bent on destroying all of humanity. She's out to save the day with the assistance of her four stout companions: Fire Dragon, Thunderbird, Boomerang Lizard, and Power Burst. Alisia totes a multi-directional, auto-targeting energy beam as her weapon and fights in tandem with each of the four creature-helpers, who have unique attack weapons of their own.