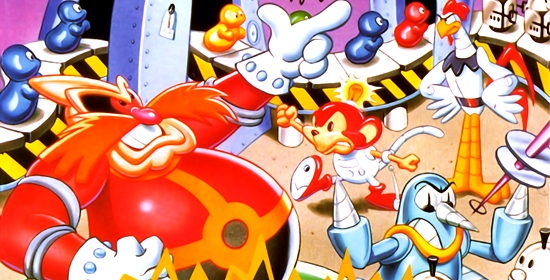 There's nothing puzzling about this Game Gear version of Mean Bean Machine. It's more fun than a bowl full of chili.

Sega's cooked up a range of puzzle challenges for Dr. Robot-oik's Game Gear debut. In game-play that resembles Columns, but actually has a lot more depth to it, you must emancipate the beanfolkof Beantown - and pump up some brain cells in the process.

In each mode of play, colored beans drop into a rectangular screen. You manipulate the beans to match four of the same color together, which makes them disappear from the screen. If the beans stack to the top of the screen, you lose.

Variations on this theme include the Scenario mode, where you go head-to-head against 12 increasingly difficult stages; Exercise mode, where you practice your bean stacking techniques; and Gear-to-Gear mode, which puts you head-to-head against a buddy. In the most innovative game, Puzzle mode, you solve specific puzzle challenges, such as eliminating all the red beans.

Mean Bean Machine is an absorbing and complex game. The graphics and sounds are simple and straightforward, but the fun is in the varied game play. The controls are easy to use and learn. Although novice puzzlers will be able to play the game, the tougher scenarios will challenge even veterans of Columns, Tetris, and the like.

Make Ho Beans About It

Mean Bean Machine is perfect fare for coffee breaks, long car rides, or any other time you need a puzzle break. It's no has-bean!

Dr. Robotnik's the madman who fans of Sonic love to hate. Now the nefarious doctor goes solo with an absorbing and addictive puzzle gamé that's more fun than a bowl full of chili.

"Bean" There, Done That

At first glance, the Mean Bean Machine looks suspiciously like a Columns ripoff. The playing field includes two rectangular areas called Dungeons, into which pairs of brightly colored beans fall. You stack the beans at the bottom of the' playing well, using the control pad to move them left and right to juggle their order. Your goal is to put four beans of the same color side by side. When you do they vanish. As in Tetris and Columns, the loser is the player whose beans reach the top of the playing area first.

ProTip: Check the window at the top of the Dungeon for a quick peek at the next pair of beans.

What gives this game a unique twist are the offensive and defensive strategies that you must use. For instance, when you match four beans together and they vanish, the remaining beans shift and settle. If they fall in such a way that additional four-bean match-ups occur, they will vanish also. Even better, for each additional match-up you make, the CPU drops a load of Refugee Beans on your opponent's stacks of beans. Nothing matches these Refugee Beans, so they thoroughly gum up your opponent's' game. To win, especially against the CPU, you've got to dump loads of Refugee Beans on your opponent. Stack and drop your beans offensively.

Although the game's graphics and sounds don't feature any ground-breaking effects, they're above average and add to the fun. The controls are simple to learn, even if you haven't "bean" around the block too many times.

The three modes of play in Mean Bean Machine are an Exercise Mode for practice, a Head-to-Head Mode for two players, and a Scenario Mode that enables you to battle Robotnik's henchbots in a series of increasingly difficult scenarios. All modes have adjustable challenge, so fun for beginners and advanced bean counters as well.

Where Have You Bean All My Life?

Despite a lot of similarities to Columns, Tetris, and other classic puzzlers, this game is ? no has-bean. The offensive strategy makes it especially fun when playing against a friend. Games of this kind seem few and far between for the Genesis, so fans of this genre should find Mean Bean Machine a match made in heaven.

The conniving man of chaos, Dr. Robotnik plans on using his meanbean-steaming machine to turn the peaceful beans of Beanville into robot slaves to do his bidding. Utilizing his merciless minions such as Arms and Coconuts to capture the beans, you must counteract their deeds by freeing the folk from Robotnik's dungeons.

Playing the game is simple. As the beans fall into the chambers, you can press a button to rotate them in different positions. Group four or more beans together in any formation to let them escape. Three different modes of play and characters from The Adventures of Sonic the Hedgehog TV series make this puzzle game one to watch for.

Like Pac Attack, once you start playing, good luck trying to put the controller down! The one-player game is a blast and the Versus Mode for two will keep you at it all night! The cinemas and graphics are also well done.

Dr. Robotnik, Sonic The Hedgehog's archenemy, makes his first appearance sans Sonic in this Columns- style puzzle game. Dr. Robotnik's Mean Bean Machine closely follows in the tradition of Tetris and Columns, and it looks like this absorbing two- player challenge is going to be just as mind-bending.

Robotnik's invented a new device, the Mean Bean Steaming Machine. This nefarious device transforms the citizens of Beanville into devious little robots. Your mission is to help the Bean folk escape Yr from Robotnik's dungeon before they're sent to the Bean Machine.

Once the game begins, Columns veterans will feel right at home. Two linked but different-colored Beans drop from the top of the screen into a rectangular dungeon. You use the directional pad to move the Beans from left to right across the screen and to control how fast they fall. Button A rotates them. If you make the Beans fall so that four or more same-colored Beans line up, they vanish and escape. If Robotnik's dungeon fills up with Beans, you lose.

The game will boast three modes of play. In the Scenario Mode, you match Beans with Robotnik's henchbots. In head-to-head play, two players compete. Exercise Mode pits you against the clock.

I am 10 Dr. Robotnik's Mean Bean Machine. This game is sort of like columns which is really boooring and this game makes you want to fall asleep.

Columns
Columns is a game of strategy and quick thinking, where you must line the blocks up to get them to disappear from the play field.

Wild Snake
Wild Snake is a tetris-like game. In this game, many snakes fall downwards. The object is to clear as many snakes as possible, and by doing this get as many points as you can, before the snakes pile up to reach the top of the playing field.