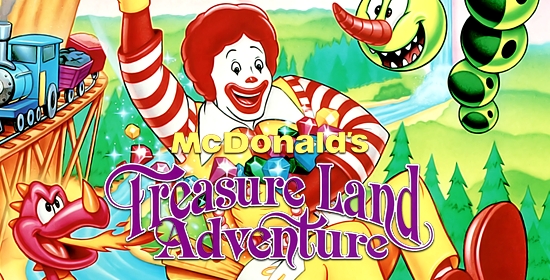 Move over Mic and Mac! Ronald McDonald is taking matters into his own hands in the latest of the McDonald's video games. With game play and graphics similar to Mario, this game is a sure hit. Graphic cinemas and a cartoony quest make this one stand out. It's a terrific game, and just think: it's not as fattening as the burgers.

One of the most recognized clowns from the world-famous restaurant franchise gets his own video game. Yes, it's Ronald McDonald, but this time he's out to find the pieces to a treasure map! However, some nasties stand in his way and he must use his magic dust to make his enemies die where they are standing! Yet the path isn't filled only with hostilities and hardship, there are quiet, tender moments with some of McDonald's other valued "friends". Grimace, Birdie, and Hamburglar (along with the plucky, yet tenacious Fry Guys) lend Ronald much-needed moral support! Remember, Ronald must collect the red gems to give to his friends for valuable tips and advice (even though those "friends" are basically mooches). Treasureland Adventure is loads of fun!

Along with his ability to make people laugh and smile, Ronald can also cast his magic powers on his enemies. He's also very strong and can hang onto bars with his scarf using only one arm.

For each of the stages, Ronald will meet up with some of his old pals. They will gladly help him out, if he gives them some of the jewels he has collected along the way. The Fry Guys are on the last stage.

Yes, it's Ronald McDonald in his own video game, but guess what? It's pretty good, too. The levels are big with plenty of items to find, and the various appearances by Ronald's crusty, yet benign, friend are a nice touch.

Ronald McDonald is bitten by the treasure bug when he finds a piece of an old map. Three major baddies hold the other pieces, and Ronald's off to find them in this eight-meg action/ adventure game. He attacks with sparkling magic, and has a special scarf for latching onto hooks and climbing to higher platforms. Non-threatening monsters and three skill levels promise action for players of all ages.

7UP Fido Dido
It is a quite a funny and interesting game about a certain painted dude who runs in different weird levels.

Mick & Mack as the Global Gladiators
The main characters are named Mick and Mack. In order to vanquish this evil, you use a goo-shooter, a weapon resembling a squirt gun.