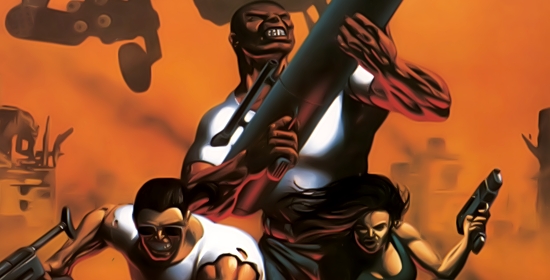 Miss the big chill of the Cold War? This thumb-blistering over-head-view helicopter game puts you back in the Red Zone with aerial and ground-based commando combat. Stick to the air, though, because the foot action may trip you up.

A Communist outlaw uses drug money to purchase nuclear weapons for a right- wing terrorist onslaught. To nail him, you must fight his awesome army of tanks, jets, and soldiers in the air and on land with an Apache helicopter gunship and a team of three selectable commandos. Your ship is tricked out with a chain gun, Hellfire antitank missiles, 70 mm rockets, and Stinger air-to-air missiles. The commandos are armed to the teeth with different weapons, including a flamethrower, a machine gun, and a rocket launcher.

Red Zone's graphics have muscle with minor twitches. The opening cinematics feature awesome digitized pix of subs, jets, and missiles, with dual tone coloring in stunning blood red and black. The Apache's slick overhead perspective smoothly swings around 360 degrees to follow the copter's moves, but the immediate view is tight and feels cramped. The large character sprites in the top-down commando fights look great, but the troops move too slowly.

The sounds kick. The hard-rocking musical score dominates the audio, but there are plenty of ear-rattling explosions and gunshots, too.

The game's uneven controls are where this chopper stopper sputters. On the positive side, the Apache controls are very cool. You can quickly spin your aircraft, and there's a nifty, easy-to-read on-screen interface for status reports. For a more detailed visual look at your mission, switch to the Intelligence Grid Map that features a zooming satellite view.

Unfortunately, the imprecise commando controls put you at a painful disadvantage. Your people are already slow, but they're very hard to direct precisely, too. That makes your attacks against enemy troops lethal...for you!

This firefight is fierce, but even though the fly-and-die action's primo, the character controls kill you. Red Zone may zone you out.

Those pesky Commies are at it again and it's up to you to save the world. But it's not as easy as it appears, since flying your attack helicopter is hampered by an overhead game view and poor game graphics. It is a challenge to beat this game.

Those pesky Commies are at it again and it's up to you to save the world. But it's not as easy as it appears, since flying your attack helicopter is hampered by an overhead game view and poor game graphics. It is a challenge to beat this game.

Seein' Red In The Combat Zone!

Hey, how 'bout blowing up some tanks, burning some people, and saving the world from nuclear destruction for a little fun? Sign me up and give me my cammies. You've got three characters to choose from and one mission: demolish the bad guys. This kind of game has been done before - many times - but an early look at Red Zone shows that Time Warner does it better than most others.

You have a full world to travel around in, by air or by land. Fly your chopper around, finding targets and lighting them up, then hop out of your chopper and go face to face with the enemy. Red Zone is like two great games in one. You have a well-done helicopter attack game and a sharp gun-to-gun combat game.

Time Warner has put together an elementary, but sound storyline. Great action, graphics, and adventure make Red Zone a game worth waiting for. Not to worry though, it's gonna be here soon enough! When we get the finished version we're gonna give you an in-depth review. Until then, hold onto your grenades and stop torching the neighbor kid, even if he does deserve it.

Choplifter III
The gameplay revolves around piloting a rescue helicopter into hostile territory and rescuing hostages.

Jungle Strike
This is a decent sequel to EA's Desert Strike. Like the first game, you control a helicopter on a series of military missions.