Asterix and the Great Rescue 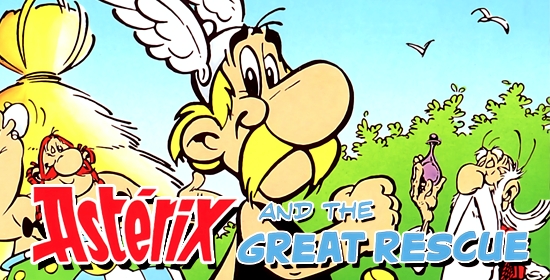 It's the year 50 B.C. - France is called Caul, Romans are roamin', and the latest fashions include pointy helmets. This side-view platform puzzler was a big hit in Europe, but remember that they also think Jerry Lewis is a genjus. You'll find only mild enjoyment in this blast to the past.

Gaul in the Family

This game gives you a choice of heroes: Asterix is a little guy executing basic action/adventure moves (a simple jump, a crouch/crawl, and standard punches), while Obelix is a big buffoon with power (he pushes blocks around). Special weapons enable them to do stuff like levitate and assume disguises. The controls aren't very effective, however-your hero must be a precise distance away from an enemy to land punches (any closer and they have no effect at all). Jumps aren't always accurate, and Asterix's speed power-up makes him reckless and uncontrollable.

The game's considerable charm lies in its cartoony graphics, which are appropriately funny for this lightweight game. Asterix saunters along with a comical gait, Obelix is a goofy clown, and colorful bad guys lurk in imaginative settings. The bouncy music and sound effects are also straight from Saturday-morning TV.

Gaul of the Wild

While not the best platform game of the year, it's certainly worth a play or two. The graphics are charming enough that fans of action/puzzle games will want to make history with Asterix.

As either Asterix or his pal Obelix, you must complete six grueling levels to reach Getafix. You can pick up special items, but they're activated only by drinking a bottle of potion. Great graphics can't save limited play control.

So you've never heard of Asterix, huh? That's understandable. He's made quite a name for himself in France, but you probably don't live there. Other than his Super NES game, this Genesis title is North America's first look at the little Gaul. But, boy, they sure amour him in France.

Based on Asterix's comic strip, Asterix and the Great Rescue follows our hero through 50 zones of puzzles and comic military situations. You can play as Asterix himself or his barrel-bodied sidekick, Obelix, on a mission to rescue two friends kidnapped from your village. You're armed with quick fists and magic potions which can give you anything from invincibility to the power of flight. Hey, I'd drink some of that!

In a gauling turn of events, Asterix's faithful pooch, Dogmatix, and his druid buddy, Cetafix, have been kidnapped by the Romans. In this brutal puzzler with an action/adventure twist, you'll quickly feel ready to rend your toga into shreds.

As Asterix or his buddy, Obelix, you must navigate six levels and more than 50 areas. To rescue your compatriots, you simply have to get to the end of each area. Along the way, you face a gauntlet of dangerous enemies and obstacles, like spikes and falling pillars. You must figure out how to dodge each obstacle, smack each enemy, and get to the end of the area to quaff a special potion before time runs out.

Sounds simple, and it is... at first. Even with adjustable challenge, Asterix ramps up so quickly, challenge-wise, that beginners may feel like letting the kidnappers keep the pooch. Experience with Lemmings or similar puzzle games is necessary battle preparation.

The secrets to success are the Special Weapons you get when you drink special potions. In addition to standard power- ups like Invincibility, Extra Lives, and Extra Health, you can also snag points by grabbing Coins, Money Bags, Helmets, and by finishing off enemies.

Asterix's graphics are bright and colorful, capturing the popular character's cartoon- style animations. Asterix, Obelix, and the enemies are all large sprites and maneuver fairly well, although the pixels don't always line up precisely, especially when you jump. Clever backgrounds add the final touch. The sounds are standard, but don't detract from the action.

After you punch the giant snowballs in Level 5, jump over the small snowballs that are left behind to avoid damage.

In the early areas, making Asterix move and swapping between the weapons seems fairly straightforward. However, as the levels get tougher, you'll find it's annoyingly easy to mix up the button for swapping Special Weapons with the button for using the Special Weapons. Even worse, the hard-to-control jumps become a downright handicap and a big frustration when you need to jump precisely, but can't.

You'll Go down in History

Asterix the Gaul is an acquired taste. If you hated Lemmings, Krusty's Fun House, and the like, then climb aboard your chariot and ride in the opposite direction. Warriors who like tough puzzle action that lasts eons should get a fix with Asterix.

Spirou
Spirou is a simple platform game, you're in a role of porter, jumping down the streets and buildings, and taking as many points as you can get.

Tintin In Tibet
Tintin embarks on a quest to the country of Tibet in search of the legendary Abominable Snowman.