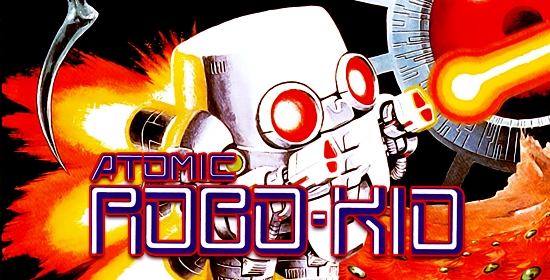 It's the early 21st Century and the Earth has been changed forever by a blast of cosmic radiation from outer space. The powerful radiation has mutated the Earth's organisms and strange life forms have over-run the planet. The few remaining humans are forced to hide or face extinction at the hands of the mutants.

In desperation a brave handful of humans, determined to save their planet, created an advanced, synthetic solder -- the Atomic Robo-Kid. It's up to you to guide the Robo-Kid in pursuit of the mutants. In Treco's Atomic Robo-Kid for the Genesis you'll have to make Earth safe for human beings again.

As the Atomic Robo-Kid you'll have to battle the mutants in five different kinds of stages. In the horizontally scrolling stages, blast your way a weird landscapes to reach a door at the end. More often than not, you'll have to the face off a mutant monster. To find the door in Maze Stages, you'll have to wind your way II through a complicated labyrinth while monstrous creatures try to put you out of commission for good. You'll face the big bosses of the mutant alliance one by one in a single room. Then, in a sort of bonus stage you'll battle against another robot with the same weapons and skills as you. If you succeed in blasting him to smithereens, you're treated to a roomful of power-ups. Finally as you journey through the other stages you'll discover secret rooms full of power-ups by knocking down special walls deep in enemy territory.

ProTip: Each area has a time limit. It's up to you whether or not to battle the area boss or move on through the door. Depending on how much time is left you may want to skip the boss and head for the door!

To defeat the mutants you'll need to use all of your special Robo-Kid skills, as well as collect and use the different weapons and power-ups. To power up, watch for special crystals that appear when you destroy different enemies.

Watch tor crystals when you blast the metal birds. Crystals also appear during battles with the big mutant bosses.

When you see the crystals, shoot them and different weapons and power-ups will appear. Once you've gathered each weapon, you can store it until you're ready to use it. Select weapons with the B button.

When you die, you only lose the weapon you're currently using.

Four powerful weapons are at your disposal. Fire Two looks similar to your normal weapon, but fires with much more nuclear power. Three Way blasts singeing light beams up, down, and in the direction you're facing. To destroy enemies from long range, fire missiles, powerful projectiles that destroy anything within their explosion radius. The Five Way shot fires five horizontal beams and is useful for blitzing a small herd of smaller mutants in one fell swoop. Other power-ups include Fly (one of the first things you'll grab), Speed Up (don't get too fast or you'll find yourself in trouble), Rensha (Rapid Fire for thirty seconds), and Shields.

You need to collect four Shields before your shield is fully functional. Once you've got them you can move faster.

Treco's Atomic Robo-Kid is one of the first third party Genesis titles available, and it backs up Sega's promise of top quality third party support. Based on an arcade title that wasn't widely distributed, the game features especially gorgeous graphics with a very 3D feel. In the end you'll destroy the mutants because you have no other choice -- it's human-kind's only chance for survival. No Kidding!

Treco's first cart on the 16-bitter casts you in control of a robot that is in fact man's last stand against the alien attackers facing the Earth's forces who are dropping like flies real fast.

After an intense burst of radiation mutated all life forms on Terra-12 strange beings took over the planet. You are a special android and must maneuver through long tunnels destroying all of the mutants. Grab the power-up crystals for multidirectional fire, missiles and shields. Buy other items from an occasional merchant and watch for special portals which will warp you to higher levels and the mutant bosses.

Atomic Robo-Kid looks nice, but the main character controls in a sluggish manner and the variation in game play is limited. The Bosses are different from most games, filling up more than one screen in some instances, but the action and technique just isn't there.

It's been a long time coming but the junior robot is finally here. Lots of different screens, some interesting battles and a few different intermission dialogue screens. Standard weaponry but the buy shop is a good idea.

Atomic Robo-Kid has some of the best graphics that the Genesis has produced and the combination of action and Shooting is laid out well. Robo-Kid is different from other shooters in many ways, so don't come expecting anything less than huge Bosses and intense firepower!

R2 D2's distant relative has gone berserk! Lost in a universe of weird technobots and strange scenarios, this is no kid when it comes to dishing out punishment! A cross between serious combat and a comical look leaves me wondering why this Robo didn't stay in school!

It's the early 20th century! A strange blast of cosmic radiation has bombarded the Earth, destroying or mutating any organism exposed to it. Horrifying mutant life forms control the planet. The few remaining human beings have little chance of survival. But the situation is far from hopeless. A brilliant human scientist has unleashed the most advanced synthetic soldier ever created -- Atomic Robo-Kid! Driven by nuclear power and armed with four types of vicious laser and missile weapons, you become Atomic Robo-Kid, humankind's only hope for the future. Based on the arcade hit of the same name, this first Genesis title from Treco looks like one of the hottest battles this side of the Milky Way!

What's a lowly space robot to do? You've been placed in the center of an alien conflict and it's up to you to put a stop to the mayhem. Blow your way through the enemy defenses in this scrolling shooter, to save the universe. You control the Atomic Robo-Kid, a jet-pack powered super droid out to stop the bad guys. Immense destructive power is on your side as well as plenty of maneuverability. Another arcade effort from one of the Genesis' first third-party performers.

Target Earth
Target Earth is about Earth's outcasts, who have become Cyborgs, returning from space to attack the civilization that remained behind. The Earth Defense League fought to defend earth in a galactic war.

Xardion
Xardion is an action platform game with a role-playing element where experience points could be accrued by defeating enemies and bosses, and each level up rewarded the cyborg with increased maximum life and ammo meters.