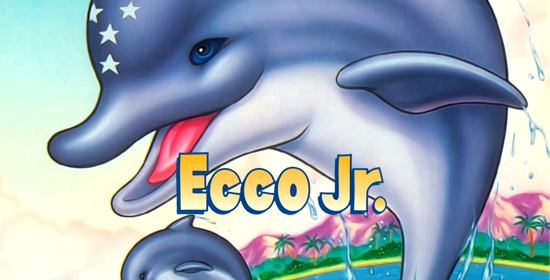 A younger sibling of Sega's best- known ocean-going mammal, Ecco Jr.'s just what it sounds like -- an easy version of Ecco the Dolphin designed for very young children.

At first glance, Ecco Jr. looks identical to its famous older brother. Picture-perfect graphics include beautiful ocean scenes crammed full of enchanting sea life. As soon as you begin to play, however, you discover that this Ecco adventure is geared for kids seven and younger.

In each of the 18 stages, you navigate Ecco, his dolphin buddies, or a friendly killer whale through a different task. When you complete the task, you move on to the next stage.

The tasks include simple chores like gathering buried treasure, playing hide 'n' seek, and finding a lost sea turtle egg. The gameplay doesn't include any fighting, and Ecco and his friends never die.

ProTip: Use Ecco's radar to send the ball across the surface of the water to the seal.

As you'd expect, Ecco's controls are simple to operate. The graphics aren't simplified, however: All the creatures and background scenery have the same breathtaking visual appeal of the grown-up Ecco adventures. As in the original Ecco games, the beautiful, haunting music and sounds enhance the action.

Ecco Jr.'s definitely for little kids -- heck, the manual is part coloring book. But that's great because the original Ecco games were way too tough for younger players. Now even the youngest Ecco fans can go fish.

Here Ecco is still a small dolphin which cannot do much and solve challenges. This idea affected the game which appeared easier and more artless than Ecco 1.

Once, playing with friends among the mossy stones on the shallow waters, ECCO swam across a glass looking shape blocking the way to a suspicious cave. Having produced the surprised exclamation, the dolphin received the answer from a crystal creature - who could have thought that such "pieces of glass" not only live in the oceans, but have also organized the whole colony, the network that puts together all the reservoirs of the Earth. Artful dolphin instantly took an interest in the treasured dream - to see personally the living legend of Atlantic, Whale Big Dark Blue, resting in the company of his girlfriend somewhere far away. And in fact the little beggar succeeded in the inquiries. What's more, for a small payment his new friend agreed to transport Ecco and the company to the vicinities of a shelter where the whale was residing.

Kolibri 32X
Kolibri is a hummingbird hero in this unusual side scrolling shooter for the 32X.