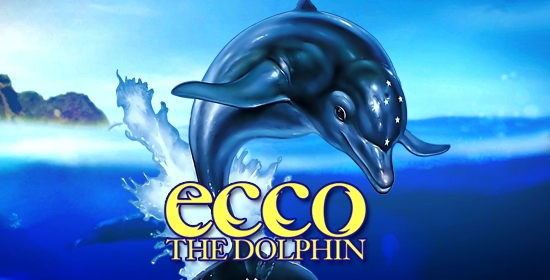 Something fishy's going on in the ocean. A mysterious race of beings from the planet Vortex is secretly harvesting food from the Earth's oceans. When Ecco the bottle-nosed dolphin's family and friends suddenly disappear, it's up to him to find them and learn more about Vortex. Sega's taking the search for intelligent life into an entirely different element.

Dolphin is one of the most original, graphically-spectacular, intelligently thought out, multi-scrolling adventures ever to swim in the Genesis, or any other game system for that matter.

As Ecco, a lonely dolphin survivor, you must find out why your friends and family disappeared in a sudden, mysterious whirlwind at sea. When you come to after the storm passes, the only dolphins you meet are strangers. Determined to find your family pod, you must swim through 24 levels of oceans; including briny deeps of the past, the Lost City of Atlantis, and even an ocean of the future.

Dolphin's enchantment begins with the incredible control you have over Ecco's movements. Sega studied footage of real dolphins swimming in order to build animations for Ecco that are so true-to-life that you'll actually feel you're a dolphin. Doin' the Dolphin with the Genesis controls is uncluttered and simple. The A button sends your sonar soaring, the B button surges Ecco forward with a burst of speed, and C makes Ecco swim faster than normal. The directional pad puts Ecco in the air, where he can jump and do a loop. By holding A down, you can release a sonar wave that enables you to track your current position on a small map.

Porpoise with a Purpose

As Ecco searches the deep blue sea, he picks up clues to his pod's whereabouts by talking to other sea creatures and by bouncing sonar off the 'Glyphs, crystallike remainders of Atlantis that act as undersea switchboards. Some 'Glyphs also block exits. To pass by these, you must find a Key Glyph which opens a passage.

When you do get clues, they're welcome indeed, because Dolphin is also a puzzler. Exiting an ocean stage often requires very intricate cavern swimming and Glyph searching. You'll need the intelligence of a porpoise to swim through twisting undersea mazes and to figure out how to get past mysterious obstacles. To make matters even more complicated, you must watch your blowhole. Just like any mammal, Ecco can only stay underwater for so long. You must constantly search for undersea air pockets or return to the surface to get more air. In addition, Ecco can only take a limited number of hits on his hide (hey, Dolphin skin is sensitive). He replenishes his health by charging at small fish and eating them.

As Ecco swims the oceans, he discovers many other sea creatures. The watery wonderlands that make up the game are inhabited by savage sharks, killer sting- rays, belligerent blowfish, obnoxious octopi, and more. Ecco also meets friendly creatures, including other dolphins and whales, who he communicates with to learn more about the Vortex mystery.

Although the sea creatures are beautifully rendered, you may have trouble concentrating on the briny bunch. You'll be too enthralled by the gorgeous oceanic background scenes such as a submerged Atlantis, a prehistoric ocean floor, and a mechanical underwater fortress, to name a few. The colors are sharp and the background scaling is fast and smooth, adding a true sense of beauty to the deep blue sea. As for the tunes, the music reflects many mammalian moods, from happy, Reggae-like jams to more somber, sad music.

Dolphin is fantastic! It's intelligent, thoughtful, and fun to play! It's also very challenging. The game was done with great sensitivity to all living things. It's a spectacular testament to the idea that video gaming can still be fun, even if you don't have to beat up or shoot up the competition. No points, no power-ups, no punching... just a porpoise with a purpose. Take Ecco for a swim in your Genesis.

Put on your diving gear and get ready for a deep sea challenge. Sega makes a big splash with their new adventure cart, Ecco. Help our dolphin friend fight off the sea monsters and find his lost pod. Whales, sharks, and octopi will try to stop you along the way. Use your sonar to travel through the 27 levels filled with incredible detail and animation. Join Ecco in his quest - this is one side-scroller you won't forget!

This one barely missed my 'Best of Month' vote! Ecco is the best combination of action and adventure I've seen in a long time. The control and technique is superb and the overall size of the quest that confronts you dolphin is immense. Great action, great story and great play add up to make a stunning game!

This was the 'top secret' game that Sega was raving about but not showing anything. They were right as this game deserves all the praises that we can dish out. Everything from the animation, to the quest, to the sound and graphics is almost perfect. The idea is new and innovative. The hot Sega game this month.

A game this unique and fun to play is good catch. No pun intended. The backgrounds are absolutely beautiful! Undersea landscapes are filled with all sorts of animal and plant life. Ecco has a feel all its own. Once you get the hang of it, your control over the dolphin is incredible. A good blend of challenge and relaxation.

Ecco is amazing to play, or should I say, experience. It really does give you feel of being a dolphin, though the challenges you face and powers you wield are far from realistic. The quest itself is well laid out, and the challenge is just about right. It is a great addition to anyone's library. Remember, dolphins are mammals, too!

For months rumors have floated through the industry in regards to a mysterious Genesis game called Dolphin. It's official -- Dolphin's breaking the surface and Sega's set to make quite a splash with this innovative product!

In this highly original game, you play Echo, a young Bottlenose Dolphin. In what begins as a normal day, you're frolicking in the ocean with a school of your family and friends. Suddenly, a tremendous storm whips the waves into a froth. Echo resurfaces to discover his family missing.

Dolphin takes you on a 29-level adventure quest that spans oceans past and present, frozen seas beneath the Artie circle, a mythical ocean, and even one on another planet. As Echo, you must swim to search for your missing family. Along the way, you'll encounter a myriad of sea creatures, some friendly and some not.

Using video tape of real dolphins swimming, Sega's animated Echo in a way that's very realistic. Echo can swim, leap out of the water, flip in the air, catch fish to eat, fight unfriendly creatures with a Head Charge, and use Echo Location, also known as sonar. Echo's sonar plays a major role in the game. He can use it to increase the strength of his Head Charge, talk to other dolphins or sea creatures, see a map of the area surrounding him, or read strange crystal-like glyphs for clues to his family's whereabouts.

If you think Dolphin sounds highly original and like nothing you've ever seen on a video game screen before, you're right. This game, developed by Sega in the U.S., takes gamers where no man, or dolphin, has gone before. This is one game that will be quite a catch.

Ecco the Dolphin is a puzzle video game released for the Sega Mega Drive/Genesis in 1992, featuring Ecco, a bottlenose dolphin, as the main character controlled by the player. The dolphin is controlled through a side-scrolling aquatic level progression. The game is known for its high difficulty level and according to the Official Nintendo Magazine, the Dolphin series is the only Sega game series to have sold more copies than the huge hit Sonic the Hedgehog series.

The gameplay is the simple one of a side-scrolling game, with horizontal, diagonal and vertical movement. Ecco can attack enemies by running into them at high speeds and he can swim faster by tapping a certain button. The speed can be maintained by holding the button down.

The players can perform a spin in the air, but this is purely aesthetic and does not help the player achieve something. Ecco the Dolphin can also speak with other characters and interact with objects, and can also use echolocation, by holding down a specific button which generates a map of the area. Ecco has to go to the surface for air periodically, because he is a mammal, so the player has to ensure the “air meter” does not run out. If this happens, Ecco’s health decreases rapidly and he will drown.

Ecco is not able to touch any enemies in the game, unless he attacks them. Otherwise he will sustain damage from any character, such as seahorses or giant octopodes.

The original release was considered to have a too difficult level, because besides the twisting underwater passages and the “air health”, there were many other things leading the players to death of the character and frustration. Even jumps out of the water were difficult to do.

The game starts with Ecco swimming in his home bay, but he gets a challenge from a podmate to see how high into the air he can jump. While in the air, a waterspout storm forms and sucks up all the life in the bay, but Ecco remains alive while also alone. Ecco then leaves the bay to search for his pod and contacts several dolphins that help him. The story ends with Ecco finding his pod again.

The version for Genesis was fairly popular and was voted with higher scores by the critics, than by the players on GameSpot. While the critics offered the game an average of 9.1, no less than 554 users (at the time of the review) voted the game with a total average of 7.7 out of 10.