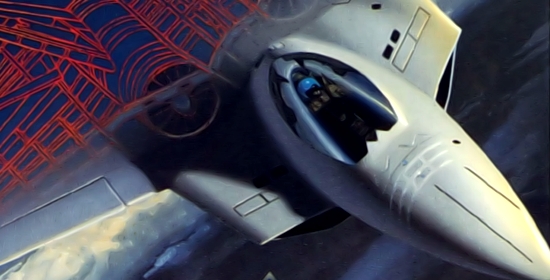 F-22 Interceptor by Electronic Arts is a top notch Genesis jet combat flight simulator -- in fact it's the only Genesis flight simulator patrolling the video airways. And that's "flight simulator" not "flying game". This game isn't at all like arcade aerial shoot-em-ups such as Afterburner or Air Diver.

In F-22 you really must "fly" to survive. For example, taking off, landing, and refueling in mid-air are all potentially fatal operations for greenhorn pilots. You can stall the aircraft or fly into the sun so that you're blinded by the glare. Turn too tightly and G-force slams you with blackouts and red-outs. All this can happen before anyone starts shooting at you!

Be prepared to log massive flight time. You fly in four theaters -- the United States, Korea, Iraq, and Russia -- each containing a whopping 30 missions. Create your own tactical nightmares with the Mission Generator or try the Aces' Challenge where you take on two and then four aces simultaneously.

The game's looks are polished and familiar. The graphics are polygon-based like many personal computer flight simulators and aerial coin-ops, but F-22 supplements the basic visuals with slick animated story sequences, sharp equipment-selection screens, nice 360-degree scans of the jet, and a moritfying "killed in action" scene.

The sounds are cool, too. Digitized vocals bark warnings and command you to shoot. Live jet engine noise, and missile thumps keep you on guard.

F-22's controls produce precision flying. That's great, but at supersonic speeds it also means they're sensitive. You can pilot the jet from three views. Most of the time you'll rely on the first-person cockpit look. There's a wide-angle Heads-Up.

Display view and an external Chase view, which, too looks forward from behind the jet.

ProTip: Use the different view options. Chase is good for ground attacks. H.U.D. is good for dogfights

Give' em the Gun

The game's great attention to detail extends to the armament. Cannons are standard equipment, but you can also outfit the F-22 with six types of missiles from the real-life Air Force arsenal including Sidewinders, Sparrows, wire-guided TOWs, and television-guided Mavericks.

The EA Air Force Wants You!

F-22 is a good flight simulator by any standard. Fledgling fliers will have a heck of a time trying to master the controls and fiddling with the options. However, veteran video jet jocks will go supersonic! The Mission Generator alone is inspired. Take off with F-22, you may never come down.

Crank up those afterburners and launch some missiles because F-22 Interceptor is making it's debut on the Genesis. A first person perspective cockpit display and animated sequences between missions put this cart in a league all it's own! Choose from several different missions and seek out the enemy. Try the Iraq scenario and save our troops! F-22 is on its way from Electronic Arts!

This game is not a high-speed shootout but instead it's one of the smoothest, most detailed flight simulators I've ever seen on a home game system. A variety of campaigns can be selected and you can even control real weapons, reminis-cent of those used in the gulf war.

Now this game is good! Afterburner was cool but F-22 adds strategy. It's not easy but good simulations aren't meant to be finished off in a few hours. The alternate view is a nice feature but for the most part I found myself glued to the cockpit view. EA has another winner!

At first I didn't think there was much to F-22, but after I got into it I found a lot of cool features. The different camera angles are very cool, especially when you follow the missile to its target. The missions are long and the enemy explosions are awesome.

F22 isn't a spectacular flight simulator, but it is better than most. Few simulator come off very well on the Genesis, and that's really a mystery to everyone. The graphics are decent, and so is the control. Sadly, a flight simulator should be more than decent.

Hop in the cockpit of a jet fighter and prepare for the battle of your life. You have all the advanced equipment that today's technology has to offer. Choose your arsenal including Maverick and Sidewinder missiles. Use your machine guns at close range, or your missiles at long range, to blow the enemy airships out of the sky! Get first person perspective missile views and more!

F-22 Interceptor offers a 3D environment with two different views of your fighter: an external view just behind your plane or a cockpit view complete with working displays.

Some missions involve attacking targets by day or night, landing on aircraft carriers or refueling from a KC-135 tanker. Before each flight, you'll be able to outfit your craft with various weaponry and countermeasures, such as Sidewinders or TOW anti-tank missiles. Feeling a little overwhelmed? A training mode will let you learn how to fly the craft and give you some target practice to boot. If you've mastered the combat zones, you can use a Mission Generator to create your own battles or embark on a special Aces' Challenge to put your piloting skills to the test. Need a breather? Missions can be continued via passwords.

Lock On
Gameplay involves flying the fictional F-119D Stealth Fighter against enemy forces. You are a fighter pilot going through wave after wave of enemies.