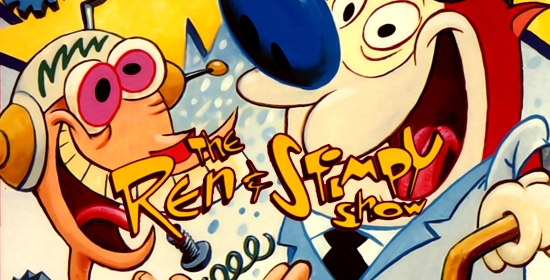 Happy Happy, Joy Joy! Ren and Stimpy are on the Genesis in a very funny (and very playable) game that gives you all the best elements of the TV show. Although the party ends just as it starts to warm up, Stimpy's Invention is the formula for fun!

In Stimpy's Invention, you play either Ren or Stimpy as you wind your way through five twisted levels in search of pieces of Stimpy's new invention, the Mutate-O-Matic. You'll go through such levels as the Zoo, the City Streets, the Dog Pound, and Stimpy's Lab. You'll meet banana-tossing Chimps, ice-box bound Walruses, and bullish Bulldogs along the way. The levels are so imaginative and fun, you' wish they were longer.

ProTip: In the Zoo, the easiest way to get past the killer Giraffes is to fly by them.

You'll also wish the game were more challenging. Intermediate players will have no problem clearing the levels. You perform standard run- and-jump maneuvers against enemies who attack from above, from the side, or from anywhere. Ren and Stimpy also have some special moves. Stimpy can squeeze Ren to belch enemies away, and Ren can squeeze a hair-ball or two from Stimpy. They also roll each other like bowling balls, toss each other like boomerangs, and hang onto each other for short aerial maneuvers. Unfortunately, despite such apparent variety, the game is still too simple.

The graphics in Stimpy's Invention will keep you glued to the set. All the outrageous characters appear, including the Horse and the Tooth Beavers. The backgrounds look like they came straight from the R & S episodes, and they're as colorful, cartoony, and comedic as the two stars.

Knock off the Fireman in the City Streets, then jump on the hydrants for a lift to new areas.

The music, although sparse, comes across well, as do the sound effects. You'll clearly hear every belch, every utterance of "Joy!" from Stimpy's mouth, and even Ren's patented, "You stupid iiiiidiot!!!" A brief rendition of "The Log Song" opens the game, and "Happy, Happy, Joy, Joy" closes the game.

Things are looking bad for our heroes in Sega's new Ren and Stimpy: Stimpy's Invention. Stimpy's crazy tomfoolery has gotten him in trouble once again - this time he's overloaded the "Mutate-o-Matic", blowing it to bits and sending wild and zany creatures all over town. The only way to stop the madness is to collect the missing machine pieces, reassemble them, then turn off the machine. R & S fans will really get a kick out of this game - especially the large number of wacky moves the two have at their disposal, from Stimpy using Ren as a shovel to Ren using Stimpy as a bowling ball. I spent at least an hour just slapping Stimpy silly before I started into the game.

However, there are a few minuses to the game, too. First off, it isn't very difficult aside from a couple of rough spots, so most gamers will whip through it in just a day or two. Also, Ren and Stimpy's special moves aren't integrated into the game as much as they should be. There's the occasional part where you might have to dig a hole or jump a long distance, but much of the game lacks that kind of depth and imagination, settling, for the most part, on walking from left to right and attacking goofy R & S paraphernalia.

Stimpy's crazy Mutate-O-Matic invention, which turns ordinary garbage into delicious food, has gone haywire and exploded, leaving parts of it scattered all over the city. Ren and Stimpy must seek out the pieces, reassemble the unit, and turn the machine off.

Use teamwork to get through the tougher areas of the game. You'll also meet up with many of the characters featured in the hit show!

Begin the adventure with a romp through the neighborhood. Our duo will face killer pink flamingos and lawnmowers, plus even go for a blustery walk through a freezer. You'll find the Beaver Power in the freezer.

The zoo is the next stop, where you'll find the Gauge. Play leap frog across many hippos' backs and visit with some friendly giraffes. To top it all off, there are also stops at the monkey house and the aviary!

Take a journey through every animal's worst nightmare - The Pound! Face angry dog catchers swinging maces, and rabid dogs. It's not over yet, though, you'll face the relentless assault of Lump and Loaf in the ring!

This level isn't your typical day at the park. Ren and Stimpy must face weeping willows with eyes, floating Stimpy noses, and ferocious Kodiak Marmosets. Beware of blood-sucking mosquitoes the size of Stimpy!

6 Level In the machine

After getting sucked through the nose of the Beaver Power, you'll begin the harrowing journey through the inner workings of the Mutate-0-Matic machine. Get to the end of this level and turn the machine off.

Ren & Stimpy is terrific for the Genesis. It's faithful to the show, and the animations are enough to make anyone laugh (especially the Giraffes at the zoo and the Beaver Power). Its only real downside is the Two-Player Mode, which is more aggravating than fun. Using another player as a tool can be fun, but its control lags. Ren & Stimpy can be a lot on fun, but word of advice - you should play alone.

Ren & Stimpy is an absolute riot! Sega conjured up another winner by giving us all their hilarious antics and sounds completely intact. The levels are pretty long and give you plenty of things to do in them. This game is also two-player simultaneous, but it's hard to cooperate with another player to get things done. Even if you're not a fan of the show, Ren & Stimpy is a solid action game that shouldn't be overlooked.

This is the best version of the cat and dog duo. Fans will be literally rolling when they see the crazy antics of these guys in action. All the funny characters are here, like Powdered Toastman. The graphics capture their hilarious facial expressions while the sound will have you cracking up. The best part is that it's two-player simultaneous and you can switch them off, even in One-Player Mode.

Being a fan of the show, I thought this game was a blast. A lot of cameos from other Ren & Stimpy characters make it fun to play throughout. The graphics and animation are top-notch and come right out of the cartoon. Sounds aren't the best, but still support the hilarious antics. Its only drawback is that a two-player game is twice as hard as a one-player. Anyone can enjoy it, but fans of the show will love it.

The goes one-on-one with the most unique to appear since pac-man!

...The latest take on the Nicktoon stars definitely does a lot to elevate the concepts behind the show into a legitimate video game contest. The mix of humor and action keeps the pace of the game ever-changing and at most times left the Q-Mann in stitches! The action isn't overwhelming, so gamers of all ages should connect with the concepts embraced in this game. Overall, this cart is plenty of fun from start to finish...

No, it's not your glasses. Stimpy's latest invention, the Mutate-O-Matic, has exploded, and our heroes need to chase down the pieces through a maze of dangerous challenges and bizarre enemies. These oh-so-odd characters take on Lump & Loaf, Cabbage Heads, and their other not-so-nice nemeses from the TV show. Two players can team up for more than six levels of cooperative action and adventure in this off-beat game.

The hit animated series makes its way to the Sega Genesis! It seems that the oafish Stimpy has created a little machine called the Mutate-O-Matic. Not surprisingly, the invention explodes, and now the entire neighborhood is up in arms.

Play as either Ren or Stimpy as you try to collect the pieces of the machine through six different levels of hilarious gameplay. Weapons like hairballs and fly swatters will aid you in your attempt to find the parts, and unique cooperative moves will give you an additional leg up. An entire maze of sub-levels will have you going at it for hours at a time, and familiar enemies like Cabbage Heads, Lump & Loaf, Marmosets, and more will try to stop you.

Bonanza Brothers
As either Mobo or Robo, you must collect all the treasures before leaving the ten buildings, and shoot any security guards that get in your way.

Dennis the Menace
In this 2D platform game, Dennis realizes he left Mr. Wilson’s door unlocked and that a thief has stolen all of his prized coin collection.