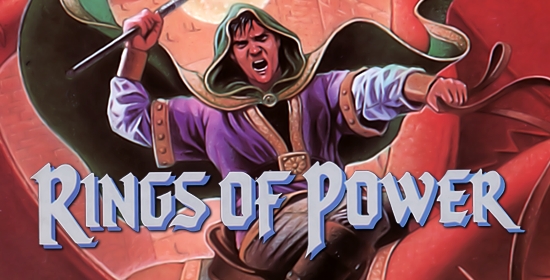 Take on the adventure for the sacred Rings of Power. 500 years ago, they vanished without a trace in the last cataclysm. Buc, your sorcerer, must take this perilous journey to find the Rings of Power. This game features a unique 3/4 overhead perspective of the game. Rings of Power will be available in late January '92.

Whatever you do, please don't tell your mom about this one. We just don't need that kind of grief here at GAME PLAYERS. But, if you can promise to keep it to yourselves, then I guess we can share this one with you. Then again, don't get too excited - it's nothing you haven't already seen on cable TV!

Electronic Arts is readying a new quest type game drawn in a 3/4 overhead diagonal view that gives a pseudo 3-D perspective. Search for the missing rings of power.

Far into the future of mankind, Earth has become a battlefield between two super beings. Humans have but six abilities standing between them and total dominance: the mental mutations which allow then the powers to survive In this now hostile land. You must master each of these 6 disciplines and with your strength reunite the Rings of Power to reclaim your lost civilization.

Five hundred years ago a cataclysmic battle between the gods Nexus and Void split the Rod of Creation in two. Now as Buc, a sorcerer's apprentice, you must find six Rings of Power and reconstruct the Rod. If you can't, all is lost.

Brave voyager, as you seek the Rings in this massive role play adventure you'll travel far and wide across the varied terrain of Ushka Bau. Scan the land from a 3-D perspective similar to that of Populous. Journey from town to city, continent to island, by land, sea, and even air as you assemble a band of six skilled adventurers, (Knight, Conjurer, Enchanter, Necromancer, Archer, and Sorcerer).

ProTip: Use the Dragon Stone to hitch a ride. Go to an area with flat land and when a Dragon appears hop on hoard. You'll need lots of food and lots of money, to keep him happy.

Although you are free to wander wherever you like, your only chance of successfully finding the Rings is to systematically search each area and listen carefully to the clues and hints of the inhabitants. Your party will be in constant need of supplies -- food, water, gold, weapons, trade goods, and special items. Fortunately, most of the towns you visit have stores where you can purchase supplies, inns where you can rest, temples for healing, and more.

Your journey across Ushka Bau is far from easy. The inhabitants of some townships will be ready to help you. But make a mistake, such as failing to pay taxes, not giving to the poor, or harming a townie and your popularity plummets. Nasty creatures abound -- from bears to roving bands of evil necromancers. You battle for your life -- and lose it often -- in classic RPG-style static-screen battles with great 3-D graphics.

Massive is the best word for Rings of Power, a quest reminiscent of the classic Seven Cities of Gold. In fact, the game comes with a gigantic manual that includes a complete run-through -- and even then you're looking at upwards of 150 hours of game time. Despite some choppy scrolling, the 3-D view and the up-close and personal battle scenes lend this RPG a unique feel, especially in tandem with the terrific tunes. You have to burn some time to nail down the complex game-play, but the compelling story line and challenging quest make this game a must for video adventurers. Ring up Rings of Power.