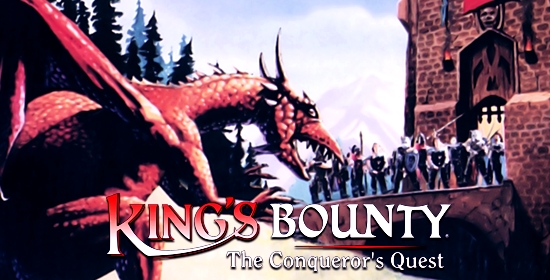 King’s Bounty is a fantasy game for PC designed by Jon Van Caneghem of New World Computing. The game was launched in 1990 for PC and was one year later ported for Sega Mega Drive/Genesis in the United States. 18 years later, in 2009, a spiritual sequel called King’s Bounty: The Legend was released for the fans. The game was also followed up by some versions developed by other companies, but the respective games were only launched in few countries.

The player controls a hero and his army across four continents. The gameplay is very flexible thanks to the plot offering the player control over many actions and decision. There are a total of 25 map pieces in the game, but the player can win the game even if he doesn’t acquire all the pieces. His only goal is to spot the Sceptre of Order before King Maximus dies. Depending on the difficulty level, King Maximus can die faster or slower, but once he does, the game is lost if the player didn’t find the sceptre.

The game begins with the King giving the hero a mission. He had to track down 17 villains across the continents. By defeating each one of them he will progress to another level and another piece of the map will be revealed. There are several treasure chests all over the place. Some of them can increase the player’s inherent abilities, such as magical strength or weekly income, while others may contain artifacts. The artifacts provide a piece of the map themselves and allow the player to acquire all the 25 map pieces faster.

The player can choose from four hero classes: Barbarian, Knight, Paladin and Sorceress, with each of the classes having their own set of skills, strength and weaknesses. The main attributes are Leadership, Commission, Spell Power and Maximum Spells. The first one determines the maximum stack size of armies. The second one is the amount of the income awarded to the character by the end of each week. The Spell Power is the number used to determine the quality of any spell cast. The Maximum Spells attribute determines the maximum number of spells the hero may know at any time.

The game was awarded in 1991 the 166th place in “The Role of Computers” column by Jager McConnell. It was reviewed with 3 out of 5 stars. The version for PC was also given 3 out of 5 stars. Though the game was not very popular, it had a considerable influence on Heroes of Might and Magic, which was a huge video game series, so Sega-16 acknowledged this by rating the game with a perfect 10 out of 10.

In King's Bounty, a new role-playing game for the Sega Genesis, you get to play hero in a quest to restore the Scepter of Order to a dying king and so defeat the evil Arech Dragonbreath. The story goes that after hiding the scepter, Arech shredded the map leading to its location and gave one piece to each of his 16 nobles. Now it is your task to find and defeat the nobles in order to recover all pieces of the map. Each noble is garrisoned inside his own castle, and only the strongest armies can breach their gates and defeat the fighters within.

As you explore, the current continent's map is filled in, marking the areas you've been through while providing hints of where to look next. You can travel by land, by water (if you've rented a boat) and by air (if your army is solely composed of flying creatures). Some areas can be reached only by using the appropriate form of travel.

No matter what form of travel you choose, sooner or later (probably sooner) you'll run into one of the many armies of dangerous creatures that roam the continents. You then enter the combat mode, in which your and your enemy's armies take turns moving and attacking. Unlike many role-playing games, in which your party consists of only one to four members, in King's Bounty your soldiers may number in the hundreds. Even with such huge armies, the combat system works quickly and smoothly.

Once you locate a noble's castle, you must lay siege to it, which means purchasing siege weapons and then defeating the occupants of the castle. When you capture a noble, you also capture one piece of the map that leads to the Scepter of Order. When you capture all 16 pieces, you can go find the scepter. Or, if you prefer, you can guess at some of the puzzle pieces, trying to find the scepter before capturing all of the nobles.

King's Bounty is a decidedly different sort of role-playing game. Its unusual money system based on a weekly salary, its self-mapping features, the contract-based bounty system and the large armies yield a game with a lot of depth. However, unlike many role-playing games, this one is more a treasure hunt than an unfolding story.

Still, fans of role-playing games are sure to enjoy King's Bounty. It's fresh and original enough to provide hours of discovery and challenging enough to inspire even expert adventurers. Recommended.

Designed by New World Computing, King's Bounty is a fantasy role-playing game based on an earlier computer version. The character you play is loyal to King Maximus, who has ruled your world's four continents with the Sceptre of Order. But a gang of villains, led by the hideous Arech Dragonbreath, has stolen the Scepter from Maximus. Now the world is a splintered, feuding place. Evil beasts, both human and nonhuman, roam the four continents.

Choosing from four different characters, you must help the king recover his scepter. To do this, you have to get a map to the scepter - and the only known map has been cut into 25 pieces. Seventeen different villains, all lackeys of Dragonbreath, hold 17 of the pieces. The other eight are buried with treasures and scattered across the continents.

The game consists largely of hunting down the villains, storming their castles, and bringing them to justice. In this way, you gradually accumulate pieces of the map leading to the sceptre. For each villain you subdue, you're paid a bounty. But you can collect the bounty only if you hold a contract on the villain. If you storm a castle occupied by a villain on which you don't hold a contract, he goes free.

Of course, there's more to it than just walking up to a castle and starting to fight. You must be sure your army is strong enough to do the job. And just as your king pays you bounty money and an allowance, you have to pay your troops.

You also have to worry about the size of your army. You can lead up to five different groups (peasants, archers, and pikemen, for example) at a time, but the number of soldiers in each group depends on your leadership ability.

It may sound confusing, but the beauty of King's Bounty is that it isn't. King's Bounty is designed to let you make progress and explore the world right from the start. Unlike many role-playing games, this one doesn't force you into one battle after another. You can rent a ship and explore the shores and rivers of all four continents in safety, and from your ship you can see treasures, enemies, and castles. You can leave the vessel to explore or gather treasure, and get back on board if an enemy threatens you.

Of course, you'll have to fight sooner or later. After all, the future of your world is at stake. But the relatively infrequent combat should please both beginning role players and veterans weary of dungeons filled with enemies.

The majestic hills have just been shifted in the balance of power for the Sword of Order has been stolen by an evil sorcerer. You are in command of an army to bring back the sacred sword.

King's Bounty: The Conqueror's Quest is a strategy, combat, and fantasy game rolled into one. Lead an armada of mystical creatures through four continents and defeat evil armies to save the realm of good. To defeat evil, you must find the Scepter of Order by capturing 17 villains who know its location. King's Bounty also features a password function to save your game.