Toejam & Earl In Panic On Funkotron 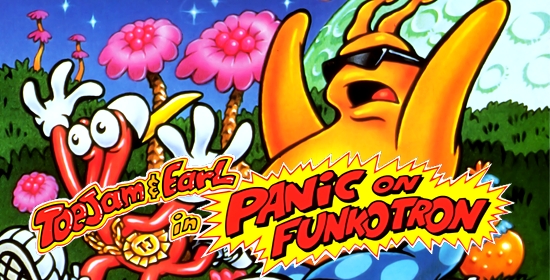 Welcome to the new adventures of that ultra-hip, rappin' alien duo. In Toe Jam & Earl in Panic on Funkotron, the boys return to their planet after an extended session of interplanetary partying, only to discover a bunch of Earthlings that stowed away on their ship are now wreaking havoc.

What's more, the crude behavior of the Earth dudes has irritated the fabulous Funkapotamus so much that he's skippin' town - and taking the Funkitude with him! If TJ and Earl don't send the humans back to Earth, Funkotron will lose its funkiness, and our little alien pals will rap no more!

Panic on Funkotron is packed with 17 action levels, each with multiple sub-levels and tons of humans to capture and return home. You have a few continues, but to finish this monster, you need all the help you can get Enter Game Players.

Yo, homeys, listen up! ToeJam & Earl, masters of funk and cool dudes extraordinaire, have a big problem. A couple of years back, TJ & E were marooned on a horrifying planet, Earth. If you've ever played to the end of the game, you know they managed to escape and return to their home-world, the happenin' planet of Funkotron. Somehow those truly uncool Earthlings tracked the rap masters home, and now they've infested Funkotron. If TJ & E don't send the Earthlings home, Funkotron will turn black and white, and everything that runs on Funk will be history.

ProTip: Search for Funkotronians with Boxes. They'll challenge ToeJam & Earl to a rap contest. If the boys win, they get Funk points.

In each of this game's 17 gigantic levels, Toejam & Earl (either solo, or together for simultaneous two-player fun) have to boogie across the landscape in search of pesky* Earthlings. Funkotron's got freaky forests, oceans, volcanic caverns, snowy peaks, and more. Each area in Funkotron is huge, with many secrets to discover, such as hidden caves, underwater passages, warps to other areas, and warps to the Hyperfunk Zone. The bro's can't exit any level until they've captured all of the Earthlings, put 'em into Trap- O-Matic Jars by tossing jars at 'em, and thrown 'em onto a space ship -- destination Earth.

While they're cleaning up after Earthling scum, TJ & E also need to keep an eye out for Lamont the Funkapotamus' favorite stuff, like his Pet Slug and his favorite Red Sneakers.

They're gonna need all this junk in order to coax Lamont out of hiding. (You can't get the game's real ending unless you get the Funkapotamus to put the Funk back into Funkotron.)

Toejam & Earl are way cool, but even that's not enough to get them out of this extremely un-Funky predicament. Fortunately, the bro's can grab some highly amusing and original power-ups as they hip-hop across Funkotron. They've got to shake every bush and tree in search of Earthlings and hidden Presents. The two dudes can call on the Funk Powers for assistance, but some of these powers are limited by the number of Presents TJ & E can grab. They've got an unlimited supply of Trap-O- Matic Jars, but they can also snag Super Jars, which bottle Earthlings in one toss. Funk Moves come in handy for zapping through walls and out of danger. The Funk Vacuum transforms Toejam or Earl into the ultimate Earthling-collector.

Who Put the Funk in Funkotron?

Funkotron is one psychedelic feast for the eyes, with plenty of fly color. Don't put on your shades, though, cause you're gonna wanna enjoy every last detail. Toejam & Earl are much larger sprites in this new adventure, which means you can see all of their fresh moves, including tons of amusing animations. The bros rap, dance, swim, jump, and mug their way through the game, each with their own unique personality. The enemies are also well-animated, from the twirpy barking Poodles to the tacky Male Tourist with the flash camera. Funkotron's backgrounds are lush with bright color and multilayered background details, which are especially noticeable in the Meadow scenes.

TJ & E's smooth moves are easy to master. Activating the special Funk Powers happens with button presses and an only slightly annoying pause to reach the Funk Menu. There's nothing complicated about Panic on Funkotron in the early levels, but hangin' with the bros gets a lot tougher. As they search Funkotron's massive later levels, the game becomes a good play for intermediate and advanced gamers. A special Lil' Kids Mode targets beginning gamers, too.

Panic on Funkotron's tunes are similar to those in the last adventure. Although they're occasionally a little repetitive, they create a great hip-hop rap mood with plenty of def effects. Toejam & Earl also have cool digitized voices. You can even participate in a rap contest and use the buttons to replicate a pattern of rap sounds that another character reels off.

Toejam & Earl have the kind of charisma that makes them a natural for a sequel, and Panic on Funkotron's a perfect opportunity for da boyz to show off their stuff. Get ready to jam!

Rocky Rodent
As Rocky Rodent, you play a Rodent who must use four various hairstyles to rescue the daughter of the owner of Rocky's favorite eatery. Rocky Rodent is a platform game with 6 levels with multiple stages, similar to a cross between Sonic the Hedgehog and S