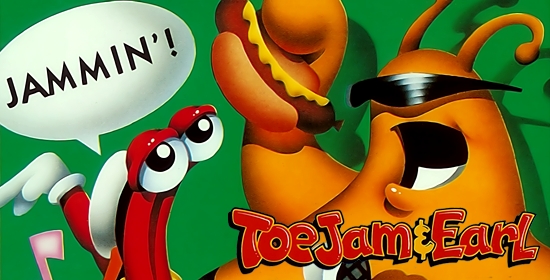 Just when you thought you'd seen it all! ToeJam and Earl, a couple of bumbling Laurel and Hardy-type aliens from the planet Funkatron, come crashin' into the video-world, ready and waiting to turn it every which way -- and then some. This near perfectly cool game features incredible music and sound effects, two-player, single and split screen cooperative play, and amazing claymation-like graphics. What's it all about? ToeJam and Earl are in trouble. They've crash landed their spaceship on Earth. The ship broke into ten pieces and is now spread out over 20 levels. Yipes! Equipped with Rocket Skates and Tomato Slingshots, the two must fend off angry earthlings, such as herds of nerds and maniacal dentists, as they chase around trying to recover the pieces of their ship, as well as raise their "coolness status" from Weiner to Supreme Funk Lord -- the ultimate cool state of being.

Find the missing spaceships parts with either Toe Jam or Big Earl, or with boots. Find extra surprises left around.

Sega is betting the farm on this title. Sonic it isn't, but it is a quest that you can play over and over without repetition. Search through multi levels looking for the 10 pieces of your ship.