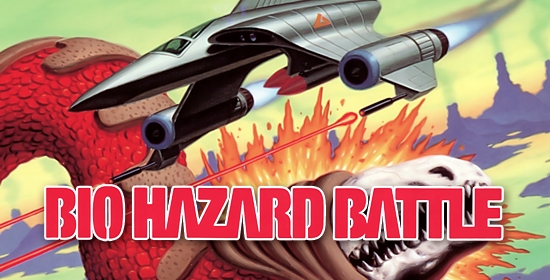 If you don't think biological weapons are nasty stuff, check out what happened on the planet Avaron. G-Biowar I (the first global biowar) released a deadly, powerful retrovirus into the environment. To escape the plague, the human survivors placed themselves in suspended animation for several hundred years. Now, they're awake and they've got a major ecological mess on their hands. To make matters worse, it has a major appetite for human flesh!

Bio-Hazard Battle is an intense, side-view, multi-scrolling shoot-em-up. The epic-length campaign covers eight murderous Stages. One or two players must clear Avaron of its monstrous inhabitants and find a safe haven for the last remaining Avaronians.

You command four Bioships, which are part organic, part machine. They look like escapees from a heavy metal zoo. Orestes and Hecuba resemble mechanical bugs, while Electra and Polyxena look like flying robo-fish.

ProTip: In Stage 3, it's practically impossible to destroy the large crab-like creatures. Stay away from their claws and concentrate on destroying the aggressive little shellfish that scuttle along the ground.

If the Bioships look strange, the creepy monstrosities you fight are mondo bizarro! Bees, Dragonflies, Slugs, Leeches, Centipede, Crabs, and Bats are a few of the creatures you'll recognize. There are other things infesting this game that are almost too sickening to contemplate, but that's what makes this game outstanding!

If you're groaning about another Genesis shooter, you ain't seen nuttin' like this. Bio-Hazard's graphics are sweet and scary. The horde of weird creatures that come flying at you look as if they've crawled out from under a rock -- only they're a thousand times bigger! The monsters are slimy and wet, but the graphics are ultra clean.

Large creatures are drawn towards the Bioship.

The Bioships' imaginative arsenal is awesome, and it puts on a fierce fireworks display. The ships' normal Plasma Blasts can be pumped up to ignite a massive Plasma Wall.

Additionally, a drone device, called a Power Star, always flies next to the ship. Moving the ship with the directional controls makes the Star sort of swing around it. With practice, you can make it stop anywhere you like.

One hit by the Plasma Wall can destroy large enemies. The Wall is a good weapon versus Stage 2's pesky rail guns.

You can also boost the Power Star's firepower to magnum levels by nabbing differently colored Seeds. Depending on the Bioship you're flying, there are six possible weapons -- the Fire Petal, the Plasma Ring, Nova multidirectional bursts, Bond plasma globes, the Spin Laser twin laser, and the Seeker Laser. The more Seeds of the same color that you grab (up to three Seeds), the more powerful your Power Star gets.

It's major thumb blister time! Bio-Hazard Battle is one of the best shoot-em-ups to come flying into the Genesis in awhile. The graphics are stunning, and the action's cunning. Even the sound is big league stuff. Missing out on Bio-Hazard will be a major disaster.

Crying
Other wise known as Bio-Hazzard in Europe, It's side scrolling shooter with slightly better graphics.

Super R-Type
Super R-Type is a shooter game, known for its high difficulty (even compared to other games in the series), particularly because of its lack of checkpoints, since dying means restarting the level from scratch.