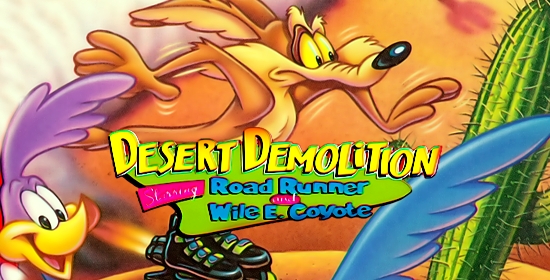 You can either the Roadrunner or Wiley Coyote in this action-packed game. While it might play too easily for some, the experience is tons of fun! So get out your rocket powered skates lovers and slap that bird on the barbeque!

You can be either the Roadrunner or Wiley Coyote in this action-packed game. While it Might play too easily for some, the experience is tons of fun! So get out your rocket powered skates and slap that bird on the barbecue!

Never could understand why the Coyote couldn't catch the Road Runner. He always seemed to be able to catch up to him, but he just never had that extra "oomph" in him to finally make the grab. It really upset me.

So when Desert Demolition offered me a chance to choose characters, I had no problem picking the Coyote. Forty years of waiting would finally come to an end. I would catch the Road Runner.

After playing the game for about five minutes, I did just that. Fortunately, that's the only low point of this game. Once I realized that this game wasn't as much about catching the Road Runner (or avoiding the Coyote) and was more about actually finishing the game, I was hooked.

Plus, it's two games in one. Although it takes you through the same sequences, the areas are changed around to compensate for which character you use. When you're the Road Runner, areas include loops and ramps to help speed you along. As the Coyote, you're offered an assortment of Acme products. These features make the game quite different when you decide to switch characters for a change of pace.

Like I said earlier, the game is a bit easy. So don't expect to be playing for months. You figure it out within a couple days. But don't let that dissuade you from purchasing it. Even if you're not a fan of the Warner Brothers cartoon show, you're still gonna love Desert Demolition.

Cut to the chase! Play as Wife E. Coyote to get your paws on Road Runner or turn the tables and play as Road Runner for a completely different game! It's two games in one!

Railroad'em! Ride the rails in your Rocket Skates and catch-up with Road Runner to rake in a jackpot of Acme Saving Stamps!

Looking for some fun in the sun? Hit the desert highway with the Road Runner and his nutty nemesis, Wile E. Coyote. Clever animations and dual-sided gameplay make Desert Demolition a lightweight frolic.

Desert Demolition is really two games in one. You play through the six levels as either the dinner (Road Runner) or the diner (Wile E.), with the gameplay changing depending on which character you control.

Naturally, Road Runner is pure speed and can dodge, bounce, and sprint past the coyote's traps. Conversely, as the slower Wile E., you command an array of wacky Acme gadgets, including rockets, spring shoes, and wings.

Although there's double the gameplay, there's not exactly double the fun. As in the cartoons, Road Runner is pretty one dimensional -- the coyote's the comedy star. Road Runner's basic running and jumping gets pretty routine, and he can usually race right out of danger to the exits. The real fun comes when Wile E. uncovers his latest goofy gadget and uses it to catch his prey.

The controls are easy, especially for the simple Road Runner. He charges along, stops quickly, and bounces accurately.

Once you know what each new Acme gadget can do, Coyote is pretty easy, too. Al though his spring shoes are awkward, flying with the wings and racing with the skates offer fast fun.

The graphics and sounds are true to the classic cartoons. The backgrounds are flat and colorful, and the two protagonists are large, fluid sprites. Best of all are the humorous animations when the frantic Wile E. flounders with his springs or skates. The sounds are cartoon quality, punctuating the action with lots of boings, bams and beep-beeps.

Fans of the cartoons will welcome these crazy critters into their homes like family. Serious gamers hoping for a challenge won't find it here, however. With only one simple boss to beat at the end, Desert Demolition is easy fun that's entertaining one afternoon but forgotten the next.

Play either the Road Runner OR Wile E. Coyote in this unique side-scroller that is just like an interactive Saturday morning cartoon.

As the Road Runner, speed is your ally as you do incredible jumps, burn though loop-de-loops, and avoid all of the Coyote's contraptions and ambushes. The Road Runner can also scare an unsuspecting Coyote with his Beep-Beep attack.

As the Coyote, you use Acme's crazy gadgets to catch the Road Runner, constantly attempting to master their power without getting yourself flattened. The Coyote has a special leap attack which allows him to make a last ditch attempt to grab the bird!

Bonus rounds include cameos from other classic Warner Bros. characters such as Elmer Fudd, Bugs Bunny, Marvin the Martian.