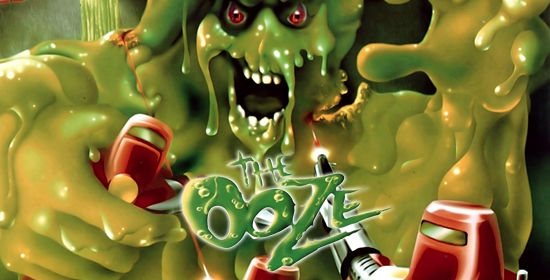 Every once in a while a game comes along that's so bad, it actually hurts to play it. The Ooze from Sega is such a game.

You're Dr. Caine, a scientist who discovers that the corporation he works for is plotting to unleash a modern-day plague. Before you can stop the terror, thugs burst into your office, inject you with stuff that turns you into a puddle of green slime, and flush you down the toilet. The game begins when you're ejected from a sewer pipe into a toxic dump, where you begin your tasks of saving the planet and picking up pieces of DNA to make yourself human again.

ProTip: Protect your head by moving quickly to avoid enemies. One hit to the head is fatal.

Back in the Sewer

Tedious gameplay and poor control flushes The Ooze down the drain. To kill enemies, you must either punch them with your ooze arm or spit at them. All too often, you aim in one direction yet end up spitting somewhere else.

The graphics aren't bad, but they're nothing you haven't seen before. Nauseous green coloring tints every frame, and the sprites could've been done better.

The sounds are the best part of the game. The music is menacing and the sound effects are humorous, but the poor overall gameplay overshadows these assets.

Oozing with mediocrity, this game never delivers anything worthwhile or worth buying. The Ooze should crawl back into the sewer.

Have you ever had that dream where you're a really, REALLY big piece of snot, and all you do is kinda squirt all over the place? You haven't? I thought we all had that dream. Oh, well... This game will let you relive the dream, but it gets old fast, just like snot.

Finally, a game about a single-celled, amoeba-like creature has made its way home! Hey, let's give the guys at Sega Technical Institute some credit! Between this game and Comix Zone, they're putting out some very different games.

In The Ooze, you are the ooze and as the ooze you must use your ooze capabilities to ooze around the playing field and try not to lose. Your attacks include spitting and extending your pseudopods out at enemies. This odd premise actually allows for some very different gameplay. Unfortunately, in the case of The Ooze, different doesn't mean better. After the originality wears off, the game becomes quite blah. The spitting and toilet flushing sound FX are great and the music is good until you realize it's the same song over and over again.

The Ooze may not be the best game around, but at least it's something different and that should be applauded.

So you say you're into puzzle solving, but it's always been your fantasy to squeeze into tight spaces and then spread out as big as a house? Well, we may just have the game for you then. The Ooze is an exploration maze-like game where your success depends on your ability to solve challenging puzzles and conquer intricate mazes. Oh yeah, and the best part is that you get to play as the Ooze. That's right, as Dr. Caine, a one-time non-oozing eyesore, you are free to spread your slimy mass here, there, and everywhere. Whatever gets the job clone, right?

In what looks to be an interesting mix of strategy and action-style gameplay, The Ooze might just work out to be something of interest to fans of both genres. If anything, it's better than smearing your chess board with a slimy, toxic substance.

In this industry, it's all too easy for game companies to take the g Jv easy way out by purchasing big-name licenses. It's easy money to develop a garbage game and then dump it into a box with an identifiable movie or cartoon show logo stamped on the front. So UBIF it's always a pleasant surprise to come across a game with not only a decent amount of originality, but an entire truckload of creative flair.

Here's the scoop: A big corporation called well, called The Corporation developed a horrible virus capable of killing off the world's entire population, a la Outbreak. Their evil plan was to blackmail governments by offering the antidote for a price, (namely, cash-money) Once one of the scientists found out about the plot, he was injected with syringe of chemicals which turned him into a puddle of gloppy green slime. AARRGHH!

As The Ooze (a/k/a Dr. Caine), you must battle your way through 18 screens in order to stop the wackos and recover your DNA code. As you move your gooey, green body along the ground, you can punch and spit at enemies. Punching is exceptionally cool in this game; even enemies located around corners can be smashed, because your fist travels in a moving, guidable puddle and the longer you hold down the punch button, the longer your range. Spitting ooze-wads cause more damage than punching, but with each spit, you lose a portion of your puddle size. If you find yourself getting smaller, you can look for ooze droppings, which add volume to your character.

There are simply too many cool things about Ooze to list in this review, but I've come up with a Top Ten list, so here goes:

Boogerman
Take control of the slightly slimy hero as he tries to thwart the nefarious Booger Meister and his plans for world domination.

Haunting
Your job is to scare each family member out of the house by possessing various objects in the house.

It Came From The Desert