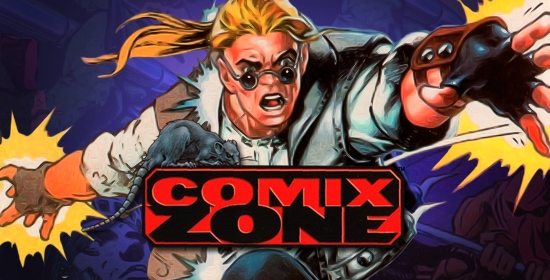 Comix Zone tries to do what no game has really done successfully to date: Capture the authentic look and feel of a comic book and make it come alive in a game. Despite gorgeous graphics and a clever page-by-page layout, the game's erratic controls and repetitive gameplay hold it back.

You're Sketch Turner, a comic-strip artist. When Mortus, a comic villain, warps from your strip into the real world, you're warped into the Comix Zone. To stay alive, you must maneuver through the comic strip's six pages.

Each Comix Zone page is laid out as a series of panels just like a real comic. To complete a page, Sketch must fight his way from panel to panel. The challenge in each panel is to bust up enemy gangs, solve simple puzzles, or sometimes to accomplish both.

The combat in each panel is basically hand-to-hand, beat- em-up style. Sketch has a nice assortment of moves, including punches, kicks, jump kicks, blocks, and a shoulder ram. Too bad the controls are imprecise and somewhat unresponsive. Sketch can't move rapidly around the panel, and button slamming yields unpredictable results.

ProTip: In the fan room at the beginning of page two, let Roadkill go, and he'll crawl under the fans and turn them off. Then you can disable them with punches and kicks.

Sketch gets erased via a simple damage system. He can pick up several power- ups, including one that summons his trusty rat pal, Roadkill, who gets him out of several jams. Prepare to die and die and die -- often unpredictably from hidden mines and the like.

Although you'll confront quite a few kinds of enemies, the battles grow annoyingly repetitive all too quickly. And the puzzles are limited to simple problems such as flipping the correct lever to open a door.

Comix Zone's rock-n-roll soundtrack is cool, but the game's graphics are really in another zone. The page-by-page level design is a bona-fide visual innovation that looks great with gorgeous background graphics in each panel. Slick-looking enemies and obstacles give the game an authentic comic-book look.

You really want to love Comix Zone for its original elements, but after a few panels, the honeymoon's over. Although the game gets a thumbs-up for its clever format, the developers need to go back to the drawing board to work out better controls and add variety to the gameplay.

Alia! A little more contemporary, this - it's only recently appeared on the old 16-bit console itself. Comix Zone is an imaginative update of the Final Fight-style perambulating beat 'em up. You play the part of a cartoonist trapped inside a comic book. Each stage in the game represents a panel in the comic. You walk along and beat a lot of people up and that's more or less it. It's a bit like being a yob in a market town at closing time. There's some snappy visuals, a smidge of classy animation, and on the whole it's addictive, if simple, fun. Nothing really new, though.

Comics and video games are as natural a combo as deafness and roc'n'roll, they're just made to go together. And while we have seen nearly a gazillion (a rough estimate) comic book heroes in video games, there has never been anything quite like Comix Zone. There's no recognizable hero like Spider-man - instead the hero is an unknown fictional comic artist who is stuck in the pages of his own book. And instead of simply running from left to right, you move frame-to-frame through a comic book with the bad guys being drawn in along the way.

Some awesome visuals, a solid soundtrack, and the extremely unique idea make Comix Zone an interesting game. But beyond all the glitz is the gameplay, which is the nearly the same as Final Fight and any one of its many clones. The basic action of the game is continually pressing the attack button until your character pulls off a combo of moves and finishes off the opponent. Then you do it again, and again... and again... However, you can pick up objects, throw switches, and choose your path to add a hint of variety to the action. Comix Zone doesn't possess quite enough of anything to turn many heads.

Comix Zone is a very cool idea for a game that wasn't executed properly, but it's still slicker than most and one of the few decent objects like 16-bit games coming out.

Over the years there have been numerous video games born from the pages of comic books. Comix Zone takes the premise one step further, or should I say one step back. In this 24-meg game there is an all-out war waged in the pages of an actual comic book. Battle your way from one enemy to the next after finding the link between each of the panels. Go from a watery slug-fest to a futuristic battle zone with one quick hop.

You're gonna need to solve some clever little puzzles to get around the page, some of which are more obvious than others. The question of quality will be in the action which seems, from what we've seen, to be running the risk of depending on a unique premise to carry it. Still, if the action is at the very least solid, the premise alone could make this a great little game.

This interactive comic book has you stuck in the pages of your own creation, while the evil Mortus continues to draw new enemies for you to face. If you fail to escape the pages and defeat Mortus, you're stuck in the Comix Zone forever! A rockin' score and a comic book approach give this game a promising future.

Comix Zone is an arcade-style action game from 1995. The game is set within the panels of a comic book, with each level of the game being two pages in the book. The dialogue is showed through talk bubbles and are written with a comic font.

Though the game was appreciated more than 15 years ago, it had its flaws as well. Reviews stated the game was hard to play and too short, but received good feedback for gameplay, graphics and soundtrack. The game was made available for several consoles since then. The game was ported to Game Boy Advance seven years after the release.

The main character of the game was Sketch Turner, who was an artist and a rock musician. He was working on this new comic book, called "Comix Zone". The book was about the New World Empire which tried to defend the Earth from the invasion of aliens. The inspiration was coming right from Sketch's dreams and nightmares.

One of the interesting part of the story happens during one night, when Sketch was working on the book and a lightning bolt stroke a panel of it. The main bad character of the book, a mutant called Mortus, escapes from the pages thanks to the light strike. However, he had no power in the real life, so Mortus tried to become free by destroying Sketch in the comic book and make himself real.

Sketch meets Alissa Cyan in the book. She believes he is a superhero, calling him The Chosen One, and thinking he is there to save their world from Mortus and the aliens. Despite him not being a superhero, General Alissa Cyan sends him on a saving mission and keeps in touch with him via a radio communication line.

After being released to the real world, Mortus started drawing enemies for Sketch to face, making the main character's mission even harder. As stated before, the game is considered short, and the final part comes right now. Sketch gets ready to launch a nuke he finds, but Alissa is there to defuse it. Mortus shuts Alissa inside the nuke, which starts to fill with liquid. Sketch's last mission is to defeat Mortus in order to save Alissa from drowning inside the nuke.

There are few other characters featuring in the game alongside the action, with Strigil (an alien known for being able to teleport using the ground), Gravis (another alien, relying on his ability to generate and launch explosive springs), Styx (a monk from the Tibetan city) and Mongoria (a dangerous woman warrior afraid of mice) featuring together with the bad characters.

The gameplay finds the main character progressing through panels. In order for him to progress, he has to fight his way past monsters and different dangers. The main character can perform punches and kick combos, but also jump attacks. He can also use different items stored in his inventory (knives, bombs etc.).

Though the game has its flaws and was launched a bit later than several other similar games of its period, it was received well by the audience.