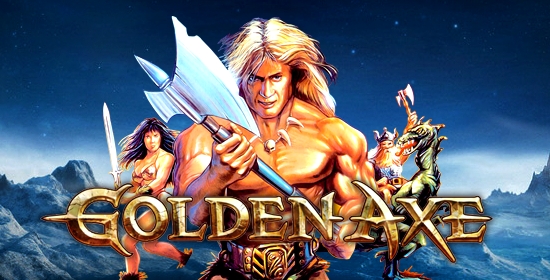 Swipe, Swipe, Swipe, swipe and jump, swipe and so on. Honestly, why did this ever seem like the height of combat game sophistication? Yet, despite the utter repetition, the game is fun, like pretty much every one of these side-scrolling combat games. At least, fun for a while. I found myself getting bored after a few levels, which is why the screenshots don't encompass all areas of the game. I also kept accidentally hitting the space bar, which made my character do the 'blue bottles in the air' nuke attack.

One nostalgic feeling that was evoked by the game is a distinct sadness that these games aren't made any more, the closest being flashy on-rails shooters made for console nutjobs. Anyway, they'd probably be utter and complete rubbish, but there's always something to be said for teaming up with a friend to clear a screen of thugs/skeletons/whatever.

Having said that, if the recent remake was anything to go by, maybe we're better off without a resurgence of the genre.

Choose, warrior! Choose the human form you will use to wreak vengeance upon the unspeakable Death Adder. Will you be the Axe Battler — a barbarian who uses the earth magic? Perhaps you'd prefer to be Tyris Flare — a warrior woman whose magic is that of fire. Or will you be Gilius Thunderhead — an Elven Viking with the magic power of lightning? Choose and enter the world of Sega's Golden Axe.

Actually, it doesn't much matter which character you play. Apparently, Death Adder has smoked one or more members of each character's family, so all three have an "axe to grindOn top of this, your best friend, Alex, tells you that Death Adder has captured both the king and the princess. "Avenge me!" Alex implores with his dying breath. (Talk about a bad day.)

So, your mission in Golden Axe is clear: You must chop, hack, and slash your way through hordes of evil enemy creatures, defeat Death Adder, and live to tell the tale. It's all much easier if you can find a friend to play along with you. Golden Axe allows two people to play at once, and teamwork helps you overcome the sometimes overwhelming odds.

The game controls are simple. The joystick determines your direction, and three buttons tell your character to jump, attack, or use magic. As you pursue your quest, you'll encounter some really nasty beasties—thugs, giants, skeletons, and fellow barbarians, to name just a few. Some must be killed several times before they'll stay dead, because they have the annoying habit of getting back up and coming after you again. Once you succeed in defeating an opponent, you can lift him above your head and throw him to the ground, in true prowrestling style. You'll know when an enemy is truly dead because he turns to stone.

After you've defeated all the bad guys in the immediate vicinity, a golden sword and the word "GO!" appear on the screen, accompanied by a war cry. You've cleared the area and it's time to move on.

Occasionally, as you approach a village, panicky citizens will run by. When you reach the town, you'll see why. Death Adder's minions are torturing innocent people for fun and pleasure. Annoyed by your sudden approach, they'll turn their attention to you.

Sometimes your opponents arrive by riding on the backs of dopey lizards or small dragons. When you knock the riders off, the creatures squat down, allowing you to climb on. This gives you additional powers. Pressing the attack button now makes the lizard swing its tail in lethal swipes, or makes the dragon breathe fire. Watch out, though, because the dismounted riders will try to knock you off and remount.

Between stages in Golden Axe, you get to see a map that details your progress and tells you where to find more trouble. Following this is a bonus stage that gives you the opportunity to increase your powers. In this stage, you fall asleep beside a roaring campfire, and your trusty steed promptly runs off. Next, a little thief enters your camp. If you wake up and start kicking him, he'll drop food items or magic potions. Pick them up and advance to the next hot spot.

The magic potions are nothing short of spectacular. The earth, fire, and lightning spells each call upon different forces of nature, but they all achieve the same effect — the simultaneous destruction of all enemies within sight. Think of each spell as a Dark Ages smart bomb. The sneaky thieves also appear at other stages of the game. No matter when they appear, however, the method of dealing with them remains the same — kick 'em and take their stuff.

All this ruckus takes place on a nice, big, 26-inch monitor. The characters in Golden Axe are large, and are seen from the side at an angle somewhat above eye level. The landscape changes as it scrolls, and the bad guys usually come at you in twos — unlike some other horizontally scrolling games, in which the enemies come at you from both sides in swarms that cannot be measured (or destroyed) with present technology.

Golden Axe has a very sturdy joystick, a necessity in a game of this type. And by pushing the attack and jump buttons simultaneously, you can attack an enemy who is sneaking up behind you. This maneuver unleashes either an elegant sword stroke or a bonk on the enemy's head with the hilt of your axe.

Finally, there's the always-welcome option of continuing from where you lost your last life by inserting another coin. After trying Golden Axe, you'll want to keep playing.