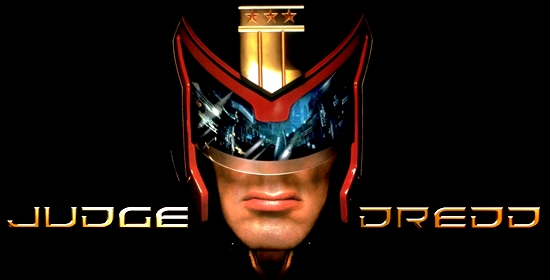 Step down Judge Ito-Judge Dredds court is now in session, and he's packing more than a gavel in this decent Game Gear title.

The Game Gear version looks and plays similarly to the two 16-bit versions. In a series of running and jumping levels, you must destroy enemy ammo, free hostages, find the computer terminals, and of course, dispense Judge Dredd's own brand of justice on numerous nameless foes.

The Judge moves cleanly with solid animation throughout the levels. While the backgrounds aren't especially bright, they're detailed and make for above-average Game Gear graphics.

Unfortunately, the sound is Dredd-ful. You get typical scratchy-sounding effects and the same plunky Game Gear music you've heard before. The only beneficial sound effect is a little jingle that lets you know you've met all your mission objectives.

It doesn't take a specialist to handle the Judge. The solid controls give you good jumping maneuverability, and you can duck, crawl, and climb handover-hand across wires. While performing any of these moves, you can shoot your gun in eight compass directions.

Even with a variety of levels and power-ups, the action stalls just a bit. If you're a Dredd fan and have a 16-bit system, spend your money there. If the Game Gear is your only system, Dredd isn't bad-but judge for yourself.

Unlike most movie-to-game adaptations, I really enjoyed playing this cart. The levels are large and intricate enough to keep even a skilled player busy for a while.

In each level there are two objectives: the primary and secondary. You only need to complete the primary to go on to the next level, but you also have the option of going for the secondary objective and any other power-ups or secret rooms you may find along the way!

Some cinemas taken straight from the movie would be nice to see in the finished version of Dredd.

Unlike many other games that are adapted from movies or comic books such as Dredd, this cart has no problem standing on its own. Definitely a good game!

There is always a danger, when it comes to making a game based on a pre-established character, that the finished product will be more dependent on name recognition than actual game quality. Fortunately, Judge Dredd is not such a case. This is not to say that Judge Dredd is a remarkable game because there is not quite enough originality involved to make it that good. However, Judge Dredd is a solid action game with good graphics, fast action, and some interesting twists.

Relying on some video game standards such as 'shoot everything that moves', the action is not exactly earth-shattering, but there are still some facets of game play that make this game a little out of the ordinary. For example, the mission of each level is not simply to make it from point A to point B without being killed. Instead you may have to destroy all the enemy ammunition storage sites or lock down a system of prison doors in the midst of a riot. The mission objectives, combined with tough enemy characters and some maze-like exploration, are the elements that make this game appealing on more than a superficial action level. This one is a safe bet in the fun department, even if it doesn't quite amaze you. GP

Ahh...I've always dreamed of a Judge Dredd video game. After all, movie/comic book games always turn out well (note the sarcasm here). Seriously, you can be the biggest Dredd fan in the world. You can also be the biggest light-gun shooter fan in the world. But I doubt anyone can enjoy this dreadful game (sorry, I couldn't resist there). First of all, this is a big knockoff of Midway's FMV light-gun games, Area 51 and Maximum Force, two very mediocre games to be cloning. Second, many innocents look like enemies-you'll be frustrated after you kill your first dozen or so. Third, you can't always tell what you're supposed to be shooting at, or what's shooting at you (because the screen can get so cluttered at times). This isn't exactly bad (everyone can't be wearing a big sign that says, "Shoot me!"), but some bad guys are too subtle to be noticed. Fourth, and most frustrating of all. many of the targets are way too tiny. You better hope your light gun is extremely accurate, and you better sit about two feet from the TV. If not, some of those tiny, hard-to-hit guns will drive you absolutely nuts (especially those that take a million shots to kill and have friends who are shooting you at the same time). Save your energy for something better; JD isn’t. worth straining your trigger finger on.

Maybe two years ago this would've been at the pinnacle of mediocrity. Now though, in light of other games that handle the genre infinitely better, it's fortunate to fall just this side of terrible. The backgrounds are well-rendered but mushy, the character design is ropy, and the whole thing fails miserably to convey the action of a classic English character. Add to this a sluggish feel and you have tired and ultimately sad little game.

Yawn. With games like Time Crisis and Point Blank out there, I can't imagine anyone but the hardest of the hardcore Judge Dredd fans (if they even exist) would want to play this game. The rendered backgrounds don't mix well with the characters, making targets often hard to place, and the collision detection is poor. Add to that short, boring stages and cheesy FMV and you get one dreadful (no pun intended) light-gun shooter.

I was never a big fan of Area 51 or Maximum Force, and seeing as how Judge Dredd is a third-rate rip-off of those lame shooters, I like this game even less. Its blocky graphics are cluttered, making it hard to see targets (the developers apparently noticed this problem, too, because arrows point out targets in Easy Mode). The tacked-on FMV story is pointless and certainly no incentive to keep playing. Worst of all. ID's frustratingly hard.

Here% how you win this one; declare everyone and everything guilty and blast the hell out of it! The different missions that need to be accomplished save this game from the file-and-forget file, but it's still just another side-scrolling shooter.

Judge Dredd translates surprisingly well to the Game Boy. The graphics are a bit dingy, and you can't see attacks before they hit. This version has pretty much the same flaws as the 16-Bit versions, with some problems in control, and cheap Bosses, but it still is a good game. The audio is a little weak, and more work should have gone into it. If there was less emphasis on backgrounds, the characters would be easy to see. The clutter hurts the game play.

You just gotta love cross-platform gaming. I'm surprised this game isn't available on the NES! Judge Dredd's attention to detail on the small screen is quite impressive. Although it seems most of the levels are here, they are considerably shorter. Again, the sounds are truly weak, but it has always been a problem on the GB. The action is all here and there are plenty of things to blast at. If you can live with the problems, you might enjoy it.

Judge Dredd knows no boundaries as he is now headed for multiple platforms. Unfortunately, this portable isn't as good as the 16-Bitters. The graphics have been hampered with the small screen size and it's difficult to see the enemy shots sometimes. The sound is just as expected--blippy for lack of a better word. The play control is tolerable, but suffers a bit because of the screen blurring. Thank goodness we have the option to use the Super Game Boy.

Judge Dredd seems to be all over the home market. From 16-Bit to portable, you're sure to lose some graphic quality, but surprisingly this game does have a lot of the effects and game play elements of its big Meg counterparts. The levels aren't quite as impressive or as fun on the little screen, but they still have a lot to offer. The biggest drawback is the shooting control, especially when trying to duck. It's a decent game but nothing special.

Well, you've seen the movie all the way through. Now, how come you can't play the game all the way through? If you're anything like me, it's because you're having trouble with just a few of the levels. So, what I've done is picked the two levels that I found to be the most difficult and tried to give you a little guidance. Maybe now that you can get through these levels, the others that you're having problems with might be a little less troublesome. Let's hope so, because no matter how much you wish it were like the movie, just paying the admission fee is not going to get you to the end.

Another comic book hero comes to life in Acclaim's Judge Dredd, which is gonna be released simultaneously with the Sylvester Stallone movie. Armed with a bike and a gun you go though twelve levels - eight based on the movie and four on the comic book series - dispatching justice and kickin'ass! Judge Dredd uses the usual side-scrolling view and an occasional mode 7 3D view to mix up the action. When we see the final copy, we're gonna be judge, jury, and executioner. Until then, Dredd is innocent until proven boring.

What would've been great two years ago seems pretty ordinary now. Judge Dredd is guilty of being too similar to other action/adventure handhelds.

As in the flick, the Judge passes immediate sentences on criminals. Basically, you shoot everything in sight. Unfortunately, the controls are hit and miss. The eight high-tech weapons are fun and effective, but Dredd himself moves as slowly as Stallone talks.

The graphics and sounds are blasts from the past. Visually, the levels don't offer wild variations, but they are detailed. The sounds drone on with pulsing music and fuzzy explosions.