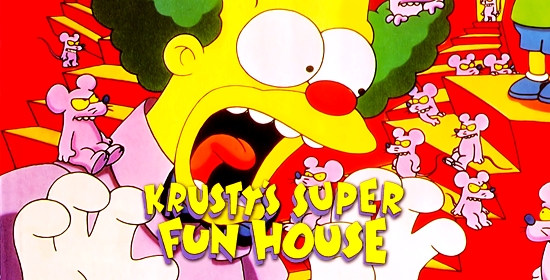 Aye Carumba! Feeling a sense of déjà vu? You're not crazy. This game's been reviewed two other times for the Genesis and the SNES. This latest Krusty claim to fame is for the NES by Acclaim.

What's With the Rats, Man?

Krusty's Fun House is infested with rats. Krusty's gotta nail the vermin or it's sayonara Fun House. Although he gets a little help from Bart, who mans the traps, Krusty's gotta rely on you in this one-player action/puzzler.

There are five garish sections in the Fun House, some with as many as 14 different levels. In each level, you must figure out how to lure the rampaging rodents to traps so that Bart can squash, zap, or otherwise exterminate them. You can tackle the levels in each section in any order you like, but you can't move on to the next section until you've finished all of the levels. Although the challenge gets tougher with each section, advanced gamers won't bust too many brain cells.

It's not really clear who's smarter -- Krusty or the vermin. The big K has to use the stuff he finds lying around the Fun House to make a path that leads the squeakers straight to the trap. He uses old Pipes, Blocks, Super Springs, and Glass Jars to steer the rats over, under, up, and around the maze of each level until they're splat-ted by Bart.

ProTip: Many times you'll have to use an item more than once to round up the rats. For example, in the second section's third door to the left, you'll have to perform a rapid relay with the blue blocks to get the rats to the trap.

Unfortunately for Krusty, there's a bunch of other nasties running around the Fun House. When he gets a load of the Venom Vipers, Laser Aliens, Pink Flying Pigs, and other assorted oddballs, he just might collapse in exhaustion. Luckily, someone's hidden a lot of junk food inside of blocks. If Krusty grabs a Burger, Potato Chips, or a Shake, he can beef up his health. Other blocks hide bonus points or even 1-ups.

Cool graphics give a carnival atmosphere to the Fun House and capture that Simpsons feeling. The grating tunes, on the other hand, are a real bummer, man. Turn them off! Krusty's Fun House is a great puzzle game for first timers or for those who don't want straight up puzzle fare. However, puzzle fanatics beware -- this game isn't gonna do it for ya! Clown around with Krusty's Fun House.

An awesome code has been discovered! At the title screen, access the password feature. Put a space before the first letter, then put in the code, JOSHUA. Now put another space after the word and press START. Krusty will laugh and you can now enter any door. Just press the L and R buttons simultaneously for a pie refill.

All you Simpsons fans get ready for a brand new adventure on the Super NES! The popular character Krusty from Bart's favorite television show is in a bit of trouble. Giant rats have taken over the show's set and he needs your help to get rid of them. He recruited Bart and Homer, plus Sideshow Mel and Corporal Punishment, to use their own personalized ways of getting rid of the rats. The game play is sort of a twist on the Lemmings theme, only you must kill off the rats instead of saving them. To rid the Fun House of rats, you must pick up various blocks and items and use them to guide the rats to their impending doom. It offers a simple idea that offers hours of challenge and brain teasing.

The game has 60 levels that are divided between five main levels. Each level has a bonus room that remains hidden until you do something in one of the other rooms. This room usually has plenty of power-ups and a few extra lives. Some of the levels are extremely complex and must be worked out perfectly, or you must give up by pressing select, it's time to build a better mousetrap!

Aye carumba! Krusty the Clown's Fun House has been invaded by a pack of vile vermin. In this one-player, puzzle/action game from Flying Edge, Krusty, Bart, Homer, Sideshow Mel, and Corporal Punishment team up as the craziest extermination team on record.

ProTip: Watch for bonus areas packed with goodies, such as this one in the middle bottom room of Section 2.

As Krusty, your job is to trap the rats in the five sections of the Fun House. A section has up to 14 different rat-infested rooms, and you can't advance to the next section until you've cleared each room of rats and other obstacles. The early sections are easy, but the later sections will challenge intermediate gamers.

Bart, or one of the other Simpson's characters, waits near a trap ready to squash or zap the offensive pests. But first, Krusty has to lure them to the trap. He does this by using different blocks, pipes, and other special items he finds to build a trail from the rats to the trap.

All of this work makes Krusty mighty hungry and tired -- especially when snakes and other baddies whack him and wear him down. Fortunately, the Clownmeister can grab 1-ups, pick up Burgers and other fast food for extra life, and find assorted weapons (like Pies) to toss at his enemies.

Decent graphics give Krusty that Simpson's appeal, but you're gonna have to turn the tunes off! Although this is good for a few laughs, it isn't much of a challenge for advanced puzzle gamers. If you're in the mood for a little clowning around, Krusty's Fun House is for you.

Sniff, sniff. Do you smell a rat? Krusty the Clown, Bart r Simpson's favorite television icon, does. In fact, he smells hundreds of them. The mangy critters have taken over his Fun House. Krusty has to trap the rats before his fun house isn't fun anymore. But can his pacemaker handle all the excitement?!

Poor Krusty! The swarmy rodents are cruisin' around like they own the joint in this one-player, action/puzzle game! Krusty's pad has five major sections, and each section breaks down into as many as 14 multi-screen levels. To clear each level, Krusty has to lure the rats into huge mechanical "rat splatters". Simpsons' stars -- Bart, Homer, Sideshow Mel, Corporal Punishment and a few other new faces -- make guest appearances as rat trap operators.

As an added insult to Krusty, the vile vermin have brought along a few unsavory guests. In an attempt to tire Krusty out, a bizarre collection of Venom Vipers, Pink Flying Pigs, Laser Aliens, and Giant Goofy Birds hang around the house and harass him. Krusty can stockpile Custard Pies to combat these creeps. Despite his klunky white shoes, he can jump. He's also got a pretty mean throwing arm. However, if the pests manage to wear Krusty down, his pacemaker gives out and he loses a life. He's got three lives per game and a password feature enables him to continue from different sections.

ProTip: As you progress in the Fun House, the rooms become more and more complicated. You may want to forego the Time Bonus. Instead, take a moment to walk around the level and size up the situation before you proceed.

Luring rats to traps requires tools and ingenuity. As Krusty walks through each level, he encounters a variety of items, including Blocks, Super Springs, Pipe Sections, Blowers, and Glass Jars. To help him maneuver the rats into traps, Krusty can grab any of these things and use them in a variety of ways. For example, he can use Blocks and springs to either help him, or the rats, reach higher levels, or cover holes in the ground that the rats fall into.

Fears of a Clown

Krusty's Super Fun House proves that clowns aren't just for kids. Although it would have been nice if Krusty were a little larger, the game's graphics capture that Simpsonesque feeling. However, you'll definitely want to turn the music off, or your pacemaker might give out! Even though Krusty's Fun House has some clever and original elements, it won't challenge heavy duty puzzle game fans. If you're a Krusty fan, though, and enjoy a light-hearted, challenging action/puzzler, don't rule out headin' over to Krusty's house.

Krusty's Super FunHouse - Some pesky rats have infested my lovely fun house up in the Springfield hills and I need your help to get rid of them! These rats are real dumb, they just walk around climbing over anything that isn't bigger than they are. If they reach a wall or barrier that is higher than them, they'll just turn around and go the other way... Use the blocks and items that you find lying around to move the rats around the level to those wacky traps where Bart, Homer and my faithful helpers Sideshow Mel and Corporal Punishment are ready to help us get rid of those rats! Good luck...! Well, that pretty much sums it up. You play as Krusty, run and jump around the different levels and figure out how to get the rats into the trap. Watch out for enemies, and make sure to get back to the entrance of each room before you get creamed yourself.

You must help to herd the rats into trap machines to clear them out. The player directs small rats to an extermination area through complicated maze-like levels.

Mick & Mack as the Global Gladiators
The main characters are named Mick and Mack. In order to vanquish this evil, you use a goo-shooter, a weapon resembling a squirt gun.