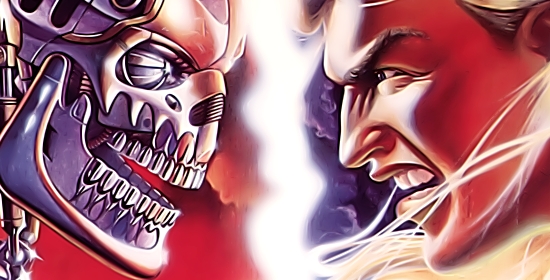 The battle between good old-fashioned wizardry and evil futuristic technology has been fought before, but rarely has it been fought as uniquely as in TechnoClash by Electronic Arts for the Genesis. Dazzling, over-head-view graphics and a battalion of demonic enemies spread over seven challenging levels make TechnoClash a technochamp among action shoot-em-ups.

Take a Walk on the Wild Side

As Ronaan, you search the Inner Realm for the destructive Engine Man, a monstrous Terminator-type creation of the wicked Technolords. Ronaan's long walk takes him from an abandoned Casino to deserts, caverns, and cloud worlds. On most levels you can recruit Bodyguards, gun-slinging allies who cover your butt against the onslaught of lethal machinery.

ProTip: You pick a Bodyguard at the start of each level. Sometimes you'll need the ferocious Faarg, other times (especially on the cloud paths of Tween Place) you'll want Chazz with his ability to levitate.

The Inner Realm is a land of colorful but dangerous mazes. To see the entire level you'll need to access the unique Living Map. This highflying, overhead look is provided by Indar, the Falcon of Second Sight, who flies above to let you scan the terrain.

As an apprentice wizard, Ronaan commands an array of nine powerful spells as weapons, everything from Lightning to Time Bombs to the ultimate Death Spell. You start out with all nine weapons, but their supplies vary, adding spell management as a good tactical dimension to the game.

The Mondo Major Spell wipes out all enemies on the screen. It's in limited supply, though, so save it for when you're backed into a comer. Instead, hit enemies with the Hold Spell, and then blast them with the endless Basic Spell.

Besides combat spells, there are four non-weapons spells that heal, levitate, teleport you back to camp, or make you temporarily invulnerable. With practice, you should be able to fight your way through most levels with minimal damage.

TechnoClash shoots the lights out of the Genesis! Digitized graphics with a rainbow of strong colors make the scenery and the villains unique. The sound effects are equally entertaining, thanks to all manner of grunts and groans from defeated villains. If Ronaan responded a little quicker to the controls and moved a little faster across open areas, TechnoClash would be top shooter. As it is, it'll have to settle for being an above-average technoblast.

Technoclash plays like a poor man's Gauntlet. It controls too loosely, and the enemies kill you too quickly. The graphics are pretty good, and the many different weapons make an excellent addition to the theme. The audio of Technoclash is OK. The challenge level is very high, because of the tough adversaries. The backgrounds, though detailed, sometimes make enemy shots hard to see. Good but not great.

Technoclash is an interesting game. The combination of magic spells and combat action works well, but the game can become boring and repetitive way too quickly. There is a wide variety of magic spells but it's much too easy to get killed by every enemy on the screen. The backgrounds are nicely detailed but it can be hard to see the enemies. Technoclash is a great idea that should be more refined to make it better.

Let's see. Good stuff about this game: ... yah. Bad stuff about this game: 1) The sound can really get under your skin with is annoying drone effects; 2) The graphics are not very appealing and are kind of drab and dull; 3) The game's super difficulty setting just doesn't make it fun to play. In a nutshell, this game tries too hard to be some sort of supercharged Gauntlet, but falls way short. Too bad.

I love Gauntlet and RPGs, but this game seemed to try too hard. With all the weapons and characters it just doesn't have the playability that an action/adventure game needs. Also, they made this thing too quite frustrating to play. If the sounds or graphics were exceptional it might have brought my score up, but both are just decent. It's nothing I'd want to spend a lot of time on.

2Galt or Not to Galt?

Band together with some of the strongest and bravest warriors armed with high-powered weapons and magic abilities and rid the land of the evil forces once and for all.

Players will be impressed with the game's graphics and game play which look and feel a lot like the arcade classic Gauntlet. The difference is the amount of magic you possess and the various partners you choose to fight with you.

Shadow Run
ShadowRun is a futuristic cyberpunk RPG set in the 2050s world of the ShadowRun pencil-and-paper role-playing game world from FASA.

True Lies
Take all of the action from the hit movie True Lies, subtract the romance, and you've got one of the most exciting games ever encountered.