Bulls vs Blazers and the NBA Playoffs 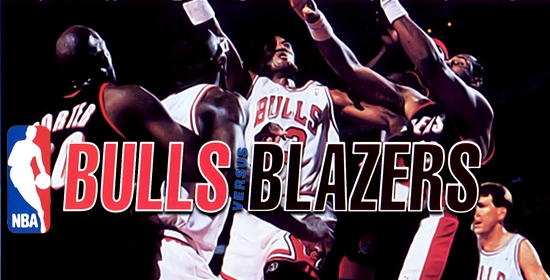 It's showtime. Bulls vs. Lakers & the NBA Playoffs. The new updated version of the game awarded "Genesis Sports Game of the Year" by Game Player's. Bulls vs. Lakers raises pro basketball to new heights. With twice as many teams: all 16 of the 1991 NBA playoff contenders plus both All-Star squads. More signature moves and more tasty dunks than a donut shop. Better defensive control and shot blocking. Even the exclusive EASN "T" Meter to help you sink those critical free throws. And, of course, you get to play with the best guys ever to lace up a pair of high-tops. High altitude acrobats like Jordan, Drexler, Kemp, and Malone. Dead-eye shooters like Bird and Mullin. Rebounding monsters like Barkley and Hakeem.

You get the entire cast that staged the most electrifying playoffs in NBA history.

Start with all sixteen teams. From there, the action only gets more intense. Establish you're inside game. Hit a few treys. Play tenacious "D.". With the right moves and a little luck, you just might advance to the championships.

As you'd expect, EASN covers every bounce of the ball. Capturing every brick that clangs off the rim, every squeal of $159 sneakers on hardwood.

The network's expanded coverage includes instant replays of everything that happens on the court. Timely stats. Scores from other games. Highlights. Even the EASN pre-game and half-time show

Prepare yourself for the ultimate in sports cart game play! Bulls vs. Lakers and the NBA Playoffs by Electronic Arts is one HOT sports game.

With exciting graphics and some of the coolest sports action to ever hit Genesis, this cart is sure to blow you away!

You can play alone or with another person as you pick which NBA team you want to portray. Make substitutions when players become fatigued, or to utilize certain players' special talents when you need them most.

Fouls are called by a computerized referee, and you may even get to shoot a free throw or two!

Get ready for some serious action with Bulls vs. Lakers and the NBA Playoffs. This is a must for serious basketball fans.

Genesis owners of Lakers vs. Celtics and Bulls vs. Lakers are already familiar with the beautiful graphics and intense sports action of Electronic Arts' excellent basketball games. Now, SNES players will also have the opportunity to lace up their high tops and hit the paint with Bulls vs. Blazers & the NBA Playoffs. It's all here: actual NBA players, their patented moves and grooves, fast-paced on-court action, and plenty of features that enable you to customize your game!

Bulls vs. Blazers features an impressive list of options, starting with all the play-off teams and their players from the 1992 NBA Championship series. Period lengths vary between 2,5,8, or 12 minutes. Play solo, head-to-head against a buddy, or team up with a friend against the computer. Set the intensity of the play and choose whether to have arcade action or simulation play, where players get tired and foul out. Finally, a handy password feature enables you to pick up tournament play at any time.

Bulls vs. Blazers is a great looking game! The characters are larger than their Genesis counterparts, and they look like their real-life personalities. Prince Charles slams home his monster dunks, and Air Jordan really soars. The background is loaded with fine details, such as the NBA logo on the court and a mob of fans and benchwarmers on the sidelines. An Instant Replay feature reruns action both forwards and backwards, down to the most minute movement. Unfortunately, the animation of the SNES version isn't as smooth as the Genesis version.

The action is a bit choppy, and it's often hard to tell which player has the ball in a crowd.

The game play is easy to pick up in this game and the controls are very responsive. Unfortunately, the stilted animation sometimes stifles the spontaneity of the onscreen reactions. How well your team fares depends partly on you and partly on the players. Each player faithfully performs according to his '92 season stats. It's expected that Michael Jordan will make a fast break, or Larry Bird will shoot that three-pointer. In simulation play, they eventually tire and need to rest. So, it's important to study your lineup and prepare for substitutions at any moment in the game.

Bulls vs. Blazers & the NBA Play-offs is a well-crafted basketball game with plentiful options, sharp graphics, and solid game play which will appeal to sports fans of all calibers. Plus, it's a blast to play all your NBA favorites! If NCAA Basketball with its Mode 7 rotational scaling wasn't coming down the pike, Bulls vs. Blazers would easily be the first draft pick for SNES basketball gaming. It's definitely a play-off contender!

Another update in Electronic Arts' basketball series, this time featuring the teams and players from the 1992 NBA playoffs plus the East and West All-Stars.

Features unchanged from the previous games include detailed stats, instant replay, substitutions, free throw T-meter and signature moves, some of which are new.

Exclusive to the Genesis version is the ability to create your own All-Star teams and to call defensive plays.

Most basketball fans would agree that the NBA regular season is just a warm-up for the real season: the playoffs. Now, thanks to Bulls vs Blazers and the NBA Playoffs, you can skip all the formalities and jump right to the good stuff. All 16 teams from the 1992 NBA Playoffs are here, and you'll find dozens of superstars and their signature moves ready for action. As an added bonus, you'll also get the 1992 East and West All-Star teams, so you can stage your own version of the mid-season showdown. With complete stat tracking, an in-depth instant replay feature, and all your favorite NBA stars, the only thing that remains to be seen is who will win the Championship?