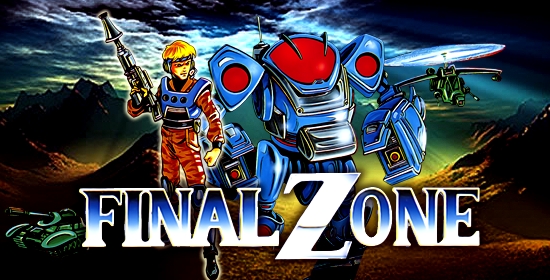 It's over... The last of the Earth's defenses have been destroyed! The alien invaders are overrunning the entire planet! Is there no hope?

Deep in a secret lab, a lone scientist prepares to field test his awesome creation: a cybernetic suit of battle armor! With the suit he can utilize a variety of weapons, options, and barriers. Taking the armor out for a spin, he knows he is the Earth's chance for freedom, but the battle is fierce!

The World is in the grips of the most gruesome war ever. You are equipped with a specialized suit called NAPS that can be switched to you different appendages for varying results.

Viewed from an isometric perspective, Final Zone has you controlling an armored soldier through 14 futuristic stages.

It is 100 years into the future, a time when weapons of mass destruction have been outlawed and wars are no longer fought with missiles and nuclear bombs. Instead, warfare is conducted via the New Age Power-Suit (NAP for short), a robotic combat machine that gives the wearer 14 of 20 available weapons, including flamethrowers, land mines, lasers and a bazooka.

You control Howie Bowie, the finest soldier of the El Shiria Military Nation's foreign legion, and operator of the K-19 Phantom NAP. Your mission is to occupy and destroy Point A-46K Bloody Axis. Basically, you must blast away at enemies using hand-held and body-mounted firing equipment. To clear a Battle Stage, you must destroy all "officers" of enemies; to clear a Boss Stage, you must destroy all the enemies. Final Zone locations include the streets, a desert and ruins, the valley, a cave, and in and around Bloody Axis.

Each time you get hit by an enemy, you will lose a weapon. Lose all your weapons and the game is over. Three levels of play are available, each giving you a certain number of continues: Easy (five continues), Normal (three continues), and Hard (one continue).

You are about to be transported 100 years in the future, where the latest wave in warfare is the New Age Power-Suit, or NAP - a robotic combat machine which gives the wearer unheard-of fighting ability. Your NAP can be equipped with up to 15 weapon, speed, and maneuverability options, out of 100 available - including flame throwers, land mines, and both hand-held and body-mounted firing equipment. With this kind of firepower to command, your only limitation will be your own strategic sense and combat savvy. The ultimate battlefield - the FINAL ZONE-awaits you!

It's the distant future and an army of robots have taken over the planet. Conventional forces have been ineffective and the last hope is a new, but untested, piece of equipment. Code name - New Age Power Suit, this special body shell comes equipped with all of the current state-of-the-art offensive and defensive gear. Weapons such as bazookas, wave guns, ray pistols, and hunter missiles are built into your arms. And you'll need them all as the robots are everywhere!

The action gets intense as you must patrol level after level of this multidirectional scrolling shooter set in a three quarter overhead view with simulated Zaxxon-style pseudo 3-D perspective. Start off on the surface of the planet out in the countryside and move on to the streets of the city finally working deeper and deeper into the enemy fortress itself.

Final Zone takes your standard shooting theme and places it in a world that is constantly seen from a 45-degree angle. Assuming the role of a mechanized infantry robot, you must patrol the ruins of multiple cities, searching for the portal that will lead you to the Boss guardian of the level. Successfully taking out the main enemy automatically thrusts you into a more dangerous, and challenging, world of attackers.

Final Zone has great graphics, but the main characters appear as though their "pasted-on" rather than interacting within a real universe. There's plenty to shoot at, but with horrible control and movement that, while visually pleasing, is tough to get used to, Final Zone ends up avg.

Something is missing in this shooter. It's not for lack of enemies nor places to move to. Perhaps it's the lack of different things to do. After a while the levels become predictable and the excitement of 'what is coming up next?' just never materializes.

Good graphics and music won't help this horribly choppy and repetitive shooter. The scrolling, animations, and even the weapons are so choppy that a few players will be able to enjoy its unique concept. Would of been cool if executed properly

Final Zone just didn't get my juices flowin' or my guns blowin' the way I thought it would. The graphics have a strange and dingy look to them, and the game play, while very intense, gets repetitive after just a short while. Definitely not my cup of shooter tea!

MechWarrior 3050
Mechwarrior 3050 is the second Battletech based game from Activision for Super NES. This time around its viewed in an isometric view as opposed to the first person view of the previous game.