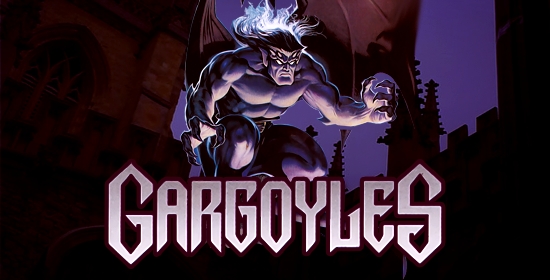 How good is Gargoyles? It's one of the best games for the Genesis, right next to Earthworm Jim 2. This action game will leave your heart pounding, your blood racing, and your thumbs burning!

Sympathy for The Devils

It starts in medieval Scotland, where an ancient race of Gargoyles is fighting a rogue band of Vikings, who unjustly possess the mystical Eye of Odin. Goliath, the Gargoyle leader, is transported to modern-day Manhattan, where he continues to search for the talisman as he fights an evil race of robots.

Goliath can swing, fly (for a very short time), and fight. During combat, he punches, bites, throws, and rips the face of his opponents. Not bad for a guy made 'of stone. Coliath uses his powers against Vikings, archers, Raptor-bots, and more as he flits through the game's 18 extensive levels.

With all these moves to master, controlling Goliath can be rough. You must accurately swing and jump from precarious ledges while fending off enemies tougher than New York gangsters.

The graphics are some of the best ever for the Genesis. Dark and dreary, the stages all fit the shadowy Gargoyles, who turn to stone should they ever see daylight. Enemies sport great detail, right down to mini-arrows, and Goliath is an impressive sight with flapping wings and beastly claws.

ProTip: To take down tough enemies in one shot, try the throw (Button A).

Ominous sounds complement the dark game, from the leathery flapping of Goliath's wings to the death moan of the female Vikings. The music definitely needs a tune-up, though. Medieval musicians ain't got no rhythm.

The game gets harder with each level, so gamers expecting an easy go of it because Of the'Disney tie-in should think again. It's easier to sneak into Disneyland than it is to finish this game. But all in all, Gargoyles gives you the kind of rewarding gameplay and gorgeous scenery associated with award-winning games like Vectorman and EWJ 2. Gargoyles rocks!

Gargoyles is a video game released for Sega Mega Drive/Genesis in 1995. The game was based on the cartoon with the same name, which was developed by Buena Vista Interactive. The Super Nintendo Entertainment System (SNES) version was also planned, but it was cancelled before the release date.

The plot follows Goliath, who is the leader of the Manhattan Clan of gargoyles, in 1994 and 1995. The player seeks to put an end to a magical and corrupted talisman called the Eye of Odin, which can transform whoever comes to possess it.

In the game Goliath will contend with the Vikings, but also with a new robotic foe that attacks him in different venues, such as the Manhattan rooftops or the subway. Goliath has a lot of defensive moves, such as fists, grapples, throws and leaping maneuvers, and he can also pump his wings to increase the jumping distance. He can also climb along walls and ceilings thanks to his claws.

There are totally 18 levels in the game. At the end of each level Goliath will have to fight and defeat a boss in order to progress to the next level.

The graphics of the game were not spectacular, maybe because of the Genesis platform, which has a low color palette. The robots and other characters looked washed out and dark and this didn’t improve the overall opinion of the game at all.

The music of the game is gothic and fits to the environment and story. The players will hear lots of clanging church bells and bass drums throughout the game. The tasty sound effects are definitely setting up a creepy environment to the game. Even the flaps of Goliath’s wings have their own sound, which adds to the sensation of a huge beast trying to propel himself on the sky. The scream of Goliath’s victims is creepy as well, but fits excellent into the game.

Demon's Crest
Published and released by Capcom in 1994, this adventure game is part of the Gargoyle’s Quest sub-series of the Ghosts ‘n Goblins franchise.

Ghouls 'N Ghosts
It's a platform game/run and gun developed by Capcom. It is the sequel to Ghosts 'n Goblins, and prequel to the Super Ghouls 'n Ghosts.