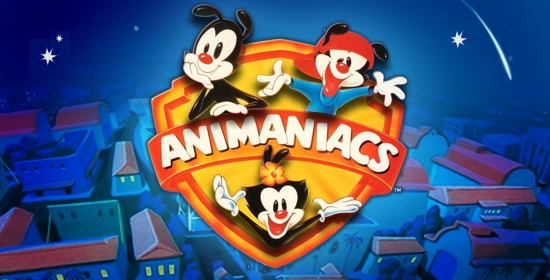 The story begins in the 1930s, a period regarded by many as the Golden Age of Animation. In an attempt to break from the norm, Warner Bros. Studios created the Warner brothers, Yakko and Wakko, as well as the Warner sister, Dot. Afraid that they were too dangerous and uncontrol-9 lable, the studio locked them up in tM the water tower until they broke out in 1993. Now they have been sum-tv moned by the CEO of Warner Bros. to stop Pinky and The Brain from making off with an award-winning script! The adventure begins here...

In this release of the game, control was a tad loose, but it's not hard to get used to.

Ugly. Ralph. I see a connection. If he could possibly chase you around more, I would be surprised.

Yacko, Wacko, and Dot bring their inspired looniness to the Game Boy.

The Animaniacs explore five movie sets looking for pieces of a mystical lost script. Moving objects and activating switches is no problem with the game's easy controls, but you must figure out who does what, which takes trial and error.

The game looks as good as old 8-bit games with enhanced graphics for the Super Game Boy. Unfortunately, the characters are as slow as molasses.

The music is as good as the graphics. The familiar theme from the show is present, as are a host of wacky sound effects.

The humor and spirit of the Animaniacs lives on in this handheld game. Fans of the show will thrill to these 'maniacs.

A fantastic cartoon tour-de-force. Excellent graphics, music, and game play combine to make this a game the both young and old can enjoy!

A fantastic cartoon tour-de-force. Excellent graphics, music, and game play combine to make this a game that both young and old can enjoy!

For 63 years, the outrageous Animaniacs were imprisoned in a lonely Warner Brothers' water tower. But their recent (and well received) escape now has Wakko, Yakko, and Dot wreaking havoc across Warner Brothers' film stages. Their latest and greatest idea - it's amazing how many ideas you can come up with when you're trapped in a water tower for 63 years - is to open a new 'hip pop culture' shop. But alas, they can't do it without your help.

You've got to lead the trio through various movie sets collecting items while steering clear of dangers like deadly spikes, flames, falling rocks, and Ralph, the security guard.

So if you're zany enough to help these hilarious cartoon characters through their crazy adventures, read on. It's time to head out to the bright lights of Hollywood. Lights; camera, action!

The Warner Brothers (Yakko and Wakko) and their sister, Dot, are ready for their close-up on the SNES, Mr. DeMille. Unfortunately, they put in a poor screen test in this version.

The Animaniacs are here once again. But this time they're aimed at an even younger audience, with tough, less-than- mature game play and childlike graphics.

The graphics include large, well-drawn, colorful characters, suitable for young 'uns. The cartoon-intensive backgrounds feature lots of visual references to the show. In this version, the terrible three some are asked to retrieve a script with Academy Award potential. The head of Warner Brothers Studios thinks the task of finding the script will keep Yakko, Wakko, and Dot out of trouble. He should think again. The trio travels to various movie set's, avoiding traps and collecting coins while trying to outrun Ralph the Security Guard.

ProTip: Use your Dash to break open boxes for coins.

Unlike its Genesis counterpart, this version isn't a really well-planned action/adventure game. It's mostly a jump-and- land-correctly, avoid-the-traps game. The characters (which are all selectable) don't have special power-ups or even items like the Hammer, Paddle Ball, or Kiss Blower that the trio in the Genesis had. Your character can dash, pick up items, and move things, however.

The graphics include large, well-drawn, colorful characters, suitable for young 'uns. The cartoon-intensive backgrounds feature lots of visual references to the show.

The music is primarily the silly theme song, repeated over and over again. Any other music is certainly forgettable, and the other sound effects are your basic binks and boinks. It would have been nice to hear some voices from the stars.

The controls are easy to remember but hard to control. You have one jump button, one dash button, and a whole lotta aggravating and precise jumps to make. Even a mundane task like outrunning Ralph the Security Guard is hard to do.

If you really like the show and are a fan of this terrific trio, then you may want this simple, thoughtless game. But real animation-maniacs will want to stick to a better-looking.

The game follows the adventures of the Warner Brothers, Wakko and Yakko, and their sister, Dot. They've been imprisoned in a water tower on the WB set since 1930, and now they're loose, wreaking havoc on the various sets and trying to collect movie-related items so they can open up a memorabilia shop.

You control all three Animaniacs, using Button C to switch between them. Each character has their own special attack (for instance, Yakko whacks enemies with his paddle ball), which they use to knock off a very funny supporting cast, including Dr. Scratchansniff and some Mafioso pigeons, the Good Feathers. The game takes you into a Western set, a space movie, and even a dinosaur flick. The stages require strategic thinking and the skills of all three Animaniacs, so you'll never go through any stage using just one character.

The very cartoony graphics are well suited for this game. The detail in the backgrounds is reminiscent of Buster's Hidden Treasures, and each move glides smoothly. The detail even shows up in the characters' expressions.

The hilarious and wacky theme music from the show accompanies the game, but it quickly gets annoying. There are no voice-overs for the characters, which is also a loss, and the standard sound effects rarely make it past the ho-hum level.

Be careful of floodlights. They're temporary and will disappear from under you.

Controlling the characters takes a little practice. While switching between characters is no problem, making the precise jumps can make you manic. Once you get the controls down, however, the rest of the game is easy.

The game is a side scroller with less action than adventure: There's not a lot of enemy bashing or set crashing. It's more strategy oriented, requiring you to think about what to do next rather than just blast through a level. Konami's return to side scrolling (after the dull Acme All-Stars) is reason enough to rejoice.

Use Wakko's hammer to set switches and light bombs or fuses.

If you're a fanimaniac, then this lineup of wackos is just as good as the cartoon show, but it's an acquired taste. Animaniacs will keep your sides hurtin', but not your thumbs.

Animaniacs is a video game released in 1994 for the Super Nintendo Entertainment System and for the Sega Mega Drive/Genesis. The game is based on the animated series with the same name and, unlike other platformers, the player has to run from the enemies instead of fighting them. Most of the main characters and supporting cast from the animated series are featured in the game as well, including Yakko, Wakko, Dot and Pinky and the Brain. The game was developed and published by Konami. The Game Boy version was released one year after the first installment, in 1995.

The player controls Yakko, Wakko and Dot, and switches the control between them to use their skills at maximum. Yakko has a paddleball to stun enemies and can push objects, including crates, while Wakko uses a mallet to hit switches, break objects and light fuses. The third character, Dot, is able to trigger actions needed to progress by blowing kisses.

The characters have their own health indicators and a fixed number of lives, which can be increased by obtaining 100 stars or a small golden form of their faces.

The SNES version is different and features another type of movement: forwards, backwards and from side to side. This type of movement is usually featured in beat ‘em ups, but this time Animaniacs has it. Pinky and the Brain have a plan to conquer the world by deciding to steal the script to the Greatest Movie. The player has to retrieve the 24 pages of the script, as his final target. Characters have no health bar, no lives or special abilities. The game for SNES is more difficult than the one for Super Farmicon, as the Genesis is called in Japan.

The version for SNES received good feedback from the audience, being voted with 7.3 out of 10, while the one for Genesis was rated with 7.4 on the same scale.

Animaniacs is a side-scrolling action game with easy puzzles based on the animated TV series. The Warner kids, Yakko, Wakko, and Dot have escaped the water tower again and are on a quest to retrieve movie memorabilia from the Warner Bros. studio lot.

There are 4 stages in the game, and in each stage the Animaniacs must work as a team to get past obstacles and enemies. Wakko can use his hammer to smash things, Dot can blow kisses to charm simple minded enemies and Yakko can pull or push boxes.

Feel a little wacky. Then join Yakko, Wakko, and Dot in Animaniacs. This 1994-1995 release, developed by Konami, became a popular franchise of video games following the wacked out cartoon series on television. This single player, platform style game, developed for SNES and Sega Mega Drive / Genesis gaming systems, have very different gamplays for the systems. In the Genesis version, the Warner Brothers and Sister are attempting to try to get closer to their all time favorite movie stars by opening a movie memorabilia store. However, they must first obtain four objects form different movie sets. There are seven stages in this game with each level containing an object at the ending after defeating the level boss. Each level has a specific time limit and the characters can move forward, backwards, and side to side. The movements display the true uniqueness in this side-scrolling game. There are health indicators and a number of lives that increase by obtaining either a hundred stars or a small golden form of the character’s face. Their health indicators are located at the top of the screen. Another portion of the game shows Pinky and the Brain plotting to conquer the world by deciding to steal the script of the “Greatest Movie ever” while it was under development. The CEO, however, asks the Warner Brothers and Sister to retrieve all 24 pages of the script.

The SNES version of Animaniacs does not have a health bar, lives, or special abilities. The game ends when all the characters are captured. The game also offers power ups in a slot machine style at the bottom of the screen. Once the player receives enough coins it can be used to make the character invincible or back to life. During the game, you will come across small robots with white block heads, red bodies, and yellow appendages. These robots work for Pinky and the Brain. This single player, Konami creation consists of six levels: Fantasy Studio, Sci-Fi Studio, Aquatic Studio, Adventure Studio, the Water Tower, and the Editing Room.