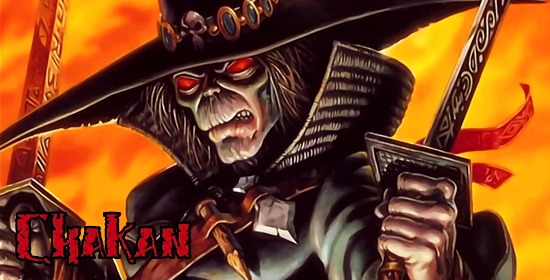 He is a being of the night, born from shadows and darkness. His deals with Death have made him an outcast among the living. He challenged the Reaper to a game: His soul was the prize and Chakan won. Or did he?

Now he roams the world seeking an end to his immortality, which has caused him nothing but pain and madness. He is you. You are Chakan.

Chakan: The Forever Man is a one-player, side-scrolling slasher game that pits you against four formidable enemies, each with a tragic tale that explains their conversion to evil. To face each enemy, you must traverse four stages in each's enemies own world, fight against the evil inhabitants, and race against the hourglass. Don't worry your weak little bones about it, though, because this game shouldn't be a stretch for good gamers.

You begin armed with swords, which you can use to slash in eight directions. During your quest, you can obtain a stone-crushing mallet, a grappling hook, an axe, and a blade. Each weapon has a special use, and it's up to you to determine where to use them.

You swing your weapons using the B button, and you jump using the A button. You can also spin and jump by pressing A while at the arc of your jump. Pretty simple stuff, but then again being dead is pretty simple, too?

So why all the hardware? The stages are about as long and hard as Chakan's grudge with Death. You'll go up against land, air, and sea monsters, plus enough other creepy crawlies to make your spine tingle. You must take on spiders, bats, dragonflies, lava-leaking statues, a killer octopus, and more.

ProTip: In the first stage of the water level, use the Super Jump potion. There are numerous potions sitting on a ledge above you.

On top of all that, the bosses are pretty tough. Fortunately, there are several potions you can use against them. To use a potion, you must find the ingredient bottles strewn across each level. Combinations of these bottles create power-ups, including Super Jumps, Invincibility, Flame Swords and Energy refills.

Search all areas of a level before you complete it Familiarize yourself with the locations of potions, because you can return to that level again.

He Looks Good (for a Dead Guy)

Chakan: The Forever Man has some beautiful backgrounds and lots of weird- looking creatures. Chakan is fairly large (as sprites go), and his movements are smooth and graceful. None of that rigor mortis setting in for this undead hero. The bosses are also huge and imposing.

The moody music in this game is definitely from, the great beyond. It's chilling, scary, and fits into each scene well. There are no toe-tappers here, but a lot of bone-a-fide graveyard jams.

Use Electric Bolts to make short work of the spiders that run along the ground in the Spider Queen's stage. Be quick, however, because those little buggers are fast and they shoot poison.

Chakan: The Forever Man is the netherworld's version of the Energizer bunny. The overall concept of this game, along with its fairly simple game play and unlimited continues, make it a low-level challenge for experienced gamers. You've seen this game before... or maybe that was in another life.

Be careful when you wish for something... you just might get it. That is what priest-warrior Chakan should have thought of before he challenged Death to a duel - and won! He bet Death his soul he could topple him in a sword fight. Upon winning, the Grim Reaper granted Chakan his wish, eternal life, which became his curse! Now, Chakan is destined to walk the earth until all evil is destroyed. Only then can he rest.

A game where you want your character to die? After defeating Death in a duel, the Grim Reaper granted priest-warrior Chakan his wish: eternal life. But now Chakan must wander the Earth until all evil is destroyed. Only then can he rest eternally. You have a variety of weapons and spells at your disposal, along with an unlimited number of lives. Eight long and treacherous levels await you if you're up to it!

Chakan has an every mood and unique look that wasn't particularly awe-inspiring, but nevertheless did add to the mood of the play. The action does require that a certain sense of technique develop in how you interact with the enemy environment that must be overcome, but it wasn't anything that I really got into.

Chakan is an exceptionally well playing game. It is a bit on the hard side for the average player as successful game play will require either a lot of trial and error or good technique. The large amount of spells is a plus and knowing when to use them is part of the fun. If you are a good player, make this your game.

Another good title from Sega. Things could be looking up. Chakan is jam-packed with interesting game play and a ton of technique. The graphics are good, and the music is decent, but this game really shines in game play. Lots of weapons and spells are at your disposal throughout each of 8 challenging levels!

Chakan is an awesome title with a lot to offer in the way of technique. Much more could be added, but that leaves room for sequel anyway. If you enjoy jump-slash-attack action titles, Chakan is perfect. The various weapons and spells give you plenty of options to fool around with while you try to meet evil head on!

Chakan has travelled from the pits of hell and is now an exciting Genesis title! Play the part of Chakan, a one time warrior priest who is doomed to wander the Earth until he can vanquish the beasts that have put this curse upon his soul.

Chakan must use weapons like machine guns, two handed axes, and flame throwers through eight starting levels but then four more levels await your undead soul.

Collect magic potions that grant you special abilities like visions into the future, invisibility, super jumps and many others!

Begin in the paradox between universes where you select from four beginning doorways where you must slay a beast keeping you from your only goal...death.

Gods
As Hercules, step forward to fight for immortality by pushing your intellect to its limits. Explore magnificent temples, lost cities, hidden underworlds and fiendish labyrinths confronting deviously intelligent adversaries all the way.