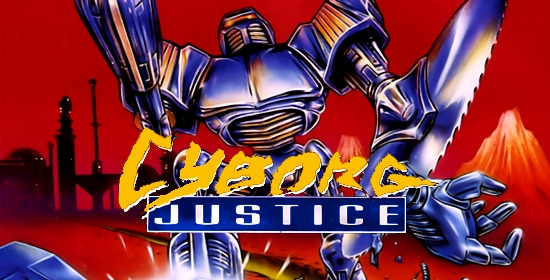 There's a new type of justice in town -- Cyborg Justice! It's lean and mean metal all the way. If you can imagine your favorite street fighting game encased in titanium, then you have a pretty good idea what it's all about.

Cyborg Justice is a one- or two-player, side-scrolling beat-em-up with a unique twist in its armor. You are Galactic Unity Agent 127... at least, you were. While on a routine patrol through the cosmos, you got whacked by an asteroid shower. The last thing that you can remember is going down in flames.

When you regained consciousness you found your "self' encased in a robo body, pulling slave duty with a bunch of other cyborgs in a Cydrek munitions factory. The Cydreks want to destroy the Galactic Unity, and you realize that the only way to save the universe is to destroy the factory. Only six million tons of angry, awesome, Cydrek Cyborgs stand between you and your goal.

Don't Get Your 'Bot Kicked

Cyborg Justice combines metal-fist-in-your-faceplate fighting action with a creative variety of game-customizing features. You and a bud can fight across desolate landscapes side by side, or you can pound each other into scrap metal. If you decide to go the arcade way, you travel across 1 E side-view levels to your ultimate destiny.

You can choose five difficulty settings from Relaxed to Brutal -- and they're not kidding about the "brutal" part, either. Cyborg gangs assault you in waves, tearing at your metal shell to get to the soft, chewy stuff inside. They also pull combination moves on you by kicking, stomping, and just plain running you over. First-time fighters should be prepared to get their cans crushed... often!

Don't worry, you can do the same to the Cydrek 'Borgs, and it's fun. Although they're hard to learn and even harder to execute, you can unleash 20 attack combos from four basic moves -- Crouches, Punches, Kicks, and Jumps -- as well as four devastating Body Attacks. Body Attacks include ripping arms off and using them as weapons, latching onto a 'Borg's torso and sapping his strength while replenishing yours, throwing an enemy 'bot, and using discarded body parts after you destroy an enemy. Get all these techniques down and you can perform the combination attacks. On defense, you can Block and bust a mean backflip.

To jump across a chasm, leap and then press B at the arc of your jump. Your 'Borg (and a little practice) should get you across safely.

Cyborg Justice features a great Cyborg- building feature. In the Cyborg Assembly Room, you can customize your 'Borg with a 18 types of Hands, Bodies, and Legs (more than 200 possible variations). Your weapon hand can be a spiked Crusher, a slicing Saw, a Laser, a Fire Sprayer, and more. Your body can be customized for a variety of strengths and skills, from the Lobster (with armor spiked shoulders) to the Insect (close-fitting for high speed). For leg wear, you have Tanks, Pneumatics, Spikes, or several other options. The Assembly Room also stars a slick feature that allows you to shadow box with your selections before you make your choice.

A Handsome Hunk of Metal

The graphics in Cyborg Justice have luster. Each Cyborg moves with ease, and they move fast! The animation is realistic and natural, not jerky and limited as you might expect from cyborgs. Some ‘Borgs look alike, but a little, yellow, easy-to-see square always appears underneath your 'droid so you know in a fight which 'Borg you're controlling. The backgrounds are nicely painted but aren't spectacular.

The sounds in Cyborg Justice are decent metal plinks and plunks. Every hit is sounded out, making the game the earful equivalent of a car with a bad engine.

Half Man, Half Machine, All Fun

Cyborg Justice makes you pay for your fun, but it's worth the effort. Learning the moves is frustrating. Once you get 'em down, though, the far-out fighting is all that's left. Although the arcade mode is great, it may be too challenging for novice players. However, Cyborg Justice is a great way to put a hardware hurt on someone. The two-player Duel mode is this game's strength. Is there no justice in this game? Only for Cyborgs.

Sega has reached Super Computer heaven with Cyborg Justice. Shipwrecked, you awake on an alien planet. Cyborgs surround you and turn you into a cyborg too, only you have retained your memory. Justice must be served. Compose your body of 'borg parts, including a saw hand, insect body, and jogging legs. When fighting an opponent, rip off one of their limbs and you can attach it to yourself. Cyberiffic!

The concept behind this game is strong, but the execution really falls flat. There isn't enough true technique in the sidescrolling scenes (something that IS made up for in the head-to-head mode), the real factor that now makes or breaks a fighting game in the post SF2-world, to support the visual effects and interesting concept.

Cyborg Justice is a nice change of pace from the mindless 'walk-and-punch-every-thing-that-moves' game. It takes real skill to master all the cyborg configurations. The one-player mode can get boring but it's nice to rip body parts off the robots at times. Grab a friend for two-player gaming: it's more fun!

I did not like this cart too much. I found the normal game to be unexciting and difficult to control. The graphics look cool, and there is a lot of animation, but the music is only fair. The two-player duel is the best feature in the game, but after the gimmick of ripping each other's arms off wears off, it's hard to stay interested.

Cyborg Justice is not for the meek, to be sure, and it certainly isn't for two players in the arcade mode! Trying to make those chasm leaps is nearly impossible! In duel mode, however, it is LOADED with cool techniques and devastating attacks! The configuration mode is an excellent option which keeps the game fresh and inviting.

Glistening cyborgs clash in a high-tech world of intense action and killer game play! Cyborg Justice is unique because you devise your own cyborg from a plethora of bolt-on body parts. Over 216 different cyborgs can be created!

Once you've assembled your creation, cross over enemy lines and engage in robot warfare. Use your weapons like the saw blade, spiked legs, plasma cannon and war hammers! Beat your opponents to pieces and hurl those pieces at other enemies!

Two players can also create cyborgs and compete in an arena. Watch the sparks fly as two lumbering giants clash it out with perfect animation and realistic sound effects.

Time to Your Cyborg Justice!

Your ship has just crash landed on an alien planet, and as you were dragged out of the wreckage, the indigenous life (being cyborgs) change you without your knowing it, into a mechanical warrior! Now it is up to you to get your vengeance and show some "Cyborg Justice"!

At the beginning of the game, you must decide what components your 'borg will be made up of. Then you can either go into the one-on-one duel or into the scenario arcade sequence. The game is filled with beautifully animated robots that actually move like an automaton should! In addition to the basic moves, you can rip off limbs and weapons from other characters and attach them to your own cyborg! Tons of detail and added touches like a 2-player mode blend together to make this cart a winner!

In the future, regular policemen have been replaced by Cyborg Law Enforcers to try and deal with the chaos plaguing the world. Now you get to create your own Cyborg and engage in battles to see if yours has what it takes to be the best. There are over 200 different combinations possible while constructing your cyborg so the replay value of this game is very large. Revel in the challenges of being the best.

Cyborg Justice is viewed from a side on perspective. The amount of health each cyborg has left is displayed as a bar at the top of the screen. There are a few different attacks available as well as the ability to jump and block.

Ranger-X
Ranger X is a side scrolling shooter of sorts. You control a large mech (robot) which has a smaller side-kick mech which is a bit like a car.

Robot Wreckage
Robot Wreckage is completely free. You may play it as much as you like without paying a single buck. Fight lots of robots and try to defeat them all. You can customize your own robot in the assembly room and measure your fighting skills with it. There is also an arcade mode available