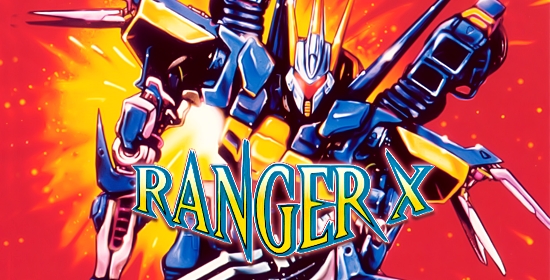 Robocop on a Harley? That's the basic premise of Ranger X, Sega's new side-scrolling shooter for the Genesis. Firing your weapons while riding a motorcycle may seem a little awkward at first (like riding a bike for the first time without training wheels), but the unique graphics and stylish backgrounds will soon have you playing in high gear.

This one-player shooter has more to it than meets the eye. You are Ranger X, a rootin', tootin', motor-scootin,' missile- shootin' soldier who's trying to protect everyone from the clutches of evil. It's a tough job, but this ranger is up to it.

There's a great selection of weapons and targets in these multi-scrolling levels. You begin with two special weapons (a flamethrower and a ground bomb) to blast away at airborne, missile-throwing, mechanical monsters, as well as fearsome fighter jets and huge bosses. You'll also find more special weapons along the way. You can shoot forward and backward. Although the two-way control setup is vexing at first, you'll get used to it in no time.

Your armor is equipped with a jetpack, and you can ride through the levels on your Ex-Up (a mechanized two-wheel version of Roy Rogers' horse, Trigger). This steel steed follows you wherever you go and provides you with much-needed back-up firepower.

This game is tough! The airborne assault is relentless, and there's no rest for the ground forces, either. You'll find yourself taking hits from everything, including seemingly harmless rocks. The metal mugging you take is nothing short of criminal. Thankfully there are power-up stations where you can restore your life and weapon bars back to full strength.

The Full Ranger of Colors & Sound

Your armored eyes will take in a flood of colors in this brightly animated, well-drawn game. Every explosion is an outburst of color, and the main sprite moves quickly and flawlessly. There is some slowdown around the bosses, but nothing worth getting your armor all wet about. The backgrounds include a forest, a post-apocalyptic wasteland, a military hangar, and a strange alien cavern.

The music is typical of shooting games, and the sounds of explosions rip through the speakers loudly and proudly.

Home on the Ranger

Ranger X will keep you occupied for hours on end, as you try to figure out where to take your metal man next. Although the action is intense, a quick thumb, good eyes, and steady nerves should take you through until the end. The unique dual action of flying and riding a motorcycle gives this game a step up over other shooters. Take the Ranger for a spin, and cash in on the X-citement.

Ranger-X is a totally intense action/shooter. It has some of the best graphics ever seen on the Genesis, with more colors than any other Sega cart. If you look closely, you'll see a lot of little details that make it even better. Unfortunately, no matter how good it looks, the controls are not on par to the game itself. It needs better control, but the visual effects still blow away any other Genesis cart around. Worth trying out.

Ranger-X is incredible! It puts the many other action titles like it to shame - and then some! The difficulty is high, but it's welcome in this day of way-too-easy games! The colors are simply brilliant, as well. The control can seem a little quirky at first, however. The incredible variety of weapons, the non-stop action, and doses of strategy are pretty much unequaled by anything else. Oh so close to a perfect score.

The Genesis finally breaks its limited color barrier with more colors than ever! Yeah! I was looking forward to playing this cart with its all-new colors and excellent graphics, but was very disappointed at how poorly the game plays. Boo! I never got a feel for how to move my robot around effectively. It would move either too fast or too slow. This is a frustrating shooter that should've worked more on control than graphics.

Don't expect a robot game in the order of Cybernator. This robot needs a tune-up...bad. It seems to fly all over the place and takes too much time to get used to. It seems the whole game play is spent trying to hover and get control of your robot. The graphics are good and so are the sounds, but the play lacks any real excitement and response. Some may get into it, but it's frustrating to control the guy.

In a bleak, futuristic era when society has failed itself and darkness prevails a lone hero rises from the ashes to restore peace and justice: Ranger X. Take to the skies in your jump jets or patrol the ground in a speedy cyber cycle, fighting evil and saving the innocent.

Ranger X is a side scrolling shooter of sorts. You control a large mech (robot) which has a smaller side-kick mech which is a bit like a car. The two can join together providing an alternate shooting mode. Whilst controlling just the main mech however, the player can shoot both forward and back by using different buttons. The mech can also use it's rocket pack to boost off of the ground and hover for a short while. Levels are not necessarily left to right moving (although for the most part they are) and the game is an interesting blend of platform game and shoot-em-up.

Featuring eight massive levels of post-apocalyptic action, Ranger X is a life-or-death epic of staggering intensity. Each environment is patrolled by a vicious boss which means that you’ll have to bring your wits and skills to make it out alive. A man-machine hybrid, Ranger X is an enigmatic alluring hero for the ages.

The game features innovative graphics given the hardware limitations - there is a 3D introduction to most levels (remembering that the console had no 3D capability and a tile-based renderer) and some levels use a line-based scrolling effect to give the impression of 3D backgrounds.