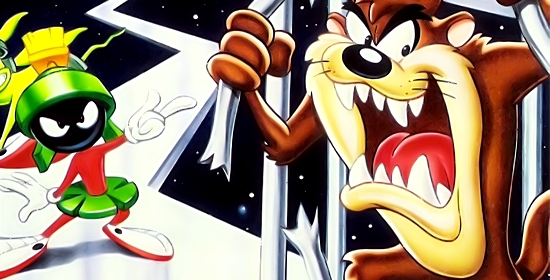 Fast, fury and furious doesn't just apply to Bubsy or Sonic -- Taz opens up the road on fast and funny side-scrollers, gobbling up everything in his path and bustin' heads with some devilish new moves.

You know you're in for some fun when you see Marvin the Martian up to no good in the intro. Sega pulled out all the stops, including memorable Looney Tunes characters like Toro the Bull. Marvin is looking for new specimens for his Intergalactic Zoo when he realizes that he doesn't have the rare Tazmanian Devil. Unfortunately, acquiring the Tazmanian Devil is harder than he thinks.

Unlike the first Taz, you have unlimited spin power, so your most formidable weapon is your whirling-dervish attack, which can breakthrough walls and burrow underground. Taz also sports a number of new moves: He can swallow a Box O' Rocks and spit pebbles, or gulp Gasoline and spit fire. Don't think that you can just power through this game, though. A multitude of traps, bombs, and pitfalls fill the levels, but you also get some tasty food power-ups and continue icons. Taz can shrink to a Tiny Taz or grow to a Titanic Taz with the help of some enemies.

Taz needs all the help he can get because he travels through the Zoo on Mars, into the land of the Molemen, inside a haunted castle, and through various other Looney stages. At the end of each stage he faces an even Loonier boss, a few of which are from the vaults of the Looney bin, like the hairy monster that Bugs gave a pedicure to in "Hare Raising Experience."

You have to eat the Exit sign to get out of a level.

Outstanding graphics fill the game as you speed through the levels. The rich backgrounds and colorful enemies, along with Taz's fully animated range of emotions (from angry to angrier) would make the Warner Brothers proud. No slowdown or glitches interrupt the action. The only noticeable graphic letdown is the dearth of Looney Tunes enemies. Most show up just as bosses, unlike Rabbit Rampage for the SNES, where every enemy was a Looney Tunes character.

The sound is definite Taz jazz. It's barely noticeable, but smooth and kinda fun. The music changes for each stage, so it's spooky or funny when it needs to be. All the sound effects complement this well-crafted game, even Taz's patented roar. Some voice would have been nice ("Why you feed me turkey with bomb inside, Rabbit?"), though it's not essential.

The controls can be quite a Tazk at times. Spinning and jumping require patience and foresight. You need to look before you leap and search before you spin. Getting Taz to burrow upward into an earthy ceiling can be downright devilish.

Don't spin into any Molemen that are near a ledge. The resulting bounce could knock you off the edge.

Just because this cartoonish game seems like a lot of fun, don't think it's a walk in the park. The levels are long and challenging, and you'll be frustrated when the continues leave you at the beginning of the level and not at the last save marker. You'll see a lot of the same level if you don't play smart.

For side-scrolling enthusiasts or baby-boomer Looney Tuners, this game has more action and excitement than the last, and is right on par with Rabbit Rampage for the SNES. If you're a Taz spaz, you won't see a better game featuring your hairball hero.

You are lost within the dark confines of a creepy manor that is more than just haunted, it's infested! Escape From Monster Manor is a first-person perspective action game where you try to find your way through labyrinth like corridors to the exit.

In your path are a number of evil monsters just waiting to rip your throat out. Zombies, ghosts and the undead are everywhere, so you'll need to find weapons. If you don't, you'll probably die, because there are many traps and creatures.

Escape From Monster Manor is an impressive game for the 3DO. It's creepy nature will surely turn your hair white. This game is truly an intense rush. It's similar to Wolfenstein 3-D, but it looks even better. Very cool.

Escape From Mars Starring Taz also know as Taz in Escape from Mars.

Taz in Escape from Mars puts you in the role of the Tasmanian Devil, the spinning, slobbering, but overall lovable cartoon character. You have been kidnapped from Earth and caged in a zoo on Mars and are being held there by Marvin the Martian. Spunky Taz that you are, you immediately begin planning your escape.

The Mars Zoo holds captive a veritable cornucopia of strange animaloids and other creatures. To escape from this house of feral insanity, you must spin to break through walls and boomerang from wall to wall to reach high places. Watch out for springy, hanging cages, which hold dangerous creatures. A maze of loop-do-loop pipes will keep you spinning like a top. Beware of a giant elephant that stands between you and freedom.

After making your escape from Mars, you will journey through five more exotic locales: Moleworld, Planet X, Mexico (!?), a haunted castle and Marvin the Martian's House. Naturally, you will do a lot of running, jumping and spinning to make your way through the levels, but you will also be called on to fly through the air and ride looping waterfalls. To access certain areas, you must move levers to open and close doors. Certain levers are used to operate machinery.

Throughout the strange worlds, molemen, oreworms, aliens, killer bees, flying eyeballs, laser-shooting robots and other menacing monsters will make your life difficult. You will also have to deal with Yosemite Sam, Witch Hazel and other fellow Warner Bros. characters. Obstacles to avoid or defeat include a wagon train stampede, spinning drill bits, a flying mining machine, bubbling pools, green gobs of goo and much more. As if that were not enough, you must also perform a number of feats such as ricocheting up and out of a trash compactor, negotiating moving platforms, luring a bull into charging walls and burrowing through the ground like a sentient drill bit.

To defeat the enemies and otherwise progress through the game, you are equipped with (or can find access to) a number of special moves: Taz Tornado, Taz Boomerang, Taz Smash, Taz 360, Taz Drill, Taz Turn-On and Taz Whirly Copter. Just like in the cartoons, the Taz in this game has a voracious appetite. He gobbles up first-aid kits, which restore his health, gasoline, which enables him to let loose a blast of hot breath, and bombs, which are not exactly health food.

Taz can also scarf up bubbling beakers, which make him super large or super small. When he's Jumbo Taz, he's tough, but unable to spin. When he's mini-size, he can fit through low tunnels. Shrink rays and growth rays can also be used to alter your size.

Once you've found a crate in a level, you've made it to the end. Jump in to escape to the next level. Transporters can be used to zap yourself to another part of the level you are already in.