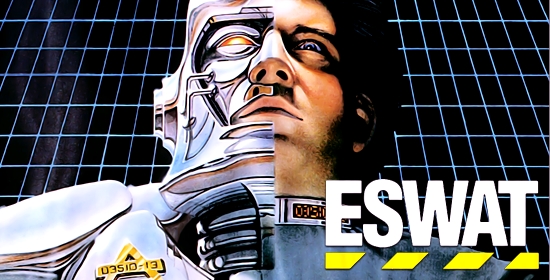 Welcome to Silent City -- and the 22nd century. Crime is at an all time high-high tech, that is. That's why the taxpayers need you; you're a Cyber cop. You're working the day watch out of ESWAT, Special Weapons and Tactics for the Cyber Police, when your partner bursts through the door with the duty report.

"Heads up, Captain, time to rock and roll. There's a riot at Cyber Prison, prowlers at the nuke power station, a blob oozing out of the old abandoned lab, and someone's impersonating an ESWAT officer, tin suit and all. And that's just the leftover from the night shift!"

Hmmm, no sweat -- unless the fake cop is an E.Y.E. terrorist. You strap on your ESWAT battle armor and stomp into the Ready Room.

"Yo, Robocop, nice suit! Who's your tailor?" Your partner doesn't believe in mechanized policing.

That's how it all starts; you're going to make sure it ends.

In the ESWAT Tradition

ESWAT: City Under Siege is an arcade mega-hit that's just making its debute in home systems (see "ESWAT' for the Sega Master System, this issue). If you liked the shoot-to-thrill arcade action, this Genesis version brings it on home. However, unlike the coin-op, this is strictly one-player fare. And although there's some carryover, you don't get exactly the same missions, villains, or storyline.

ProTip: If you let the intro screen repeat several times, you can see brief sequences from later levels (beginning at Mission 5).

ESWAT's a real gangbuster that literally blow you away. The graphics are a knock-out with 360 degree scrolling and a horizontal view of the action. It's exactly the same perspective as that of Revenge of Shinobi.

All in A Day's Work

ESWAT starts out easy, but it quick hardens into some tough Genesis gaming. You take on eight missions, but the first two, "Guard Silent City" and "Infiltrate Cyber Prison," are mere warm-ups to the rest of the game. In fact, you take on the bad guys in regular uniform as you stalk a high-rise free fire zone and clean out a prison gone berserk.

When you earn an ESWAT suit, the hard stuff begins. Mission 3 is "Defend Neo Three-Mile" where you run into a horde of armored goons and robot drones. Then it's Mission 4, "Attack Mad Scientist," where you battle monsters that would make the Blob and the Alien run screaming from the room.

After that it's "Destroy Dark Base," Mission 5, where you infiltrate the enemy base for a ferocious hardware war. In Mission 6, "Penetrate the Secret Sewer," you attack a dark, vile underground maze full of gooey monsters. In Mission 7, "Annihilate Strategy Place," you're in a deadly robotic manufacturing plant. Finally, it's "Break E.Y.E's Plan," where you go eyeball to E.Y.E. -- ball with a familiar-looking character.

Yeah, yeah, you think you can breeze through this with your hands tied behind your back. But you can't, so be on the lookout for some radical gear. You start off with a single shot hand gun, but when you earn your ESWAT suit you can upgrade your firepower.

The Super gun rapid fires three short bursts. The gangsters get a real charge from the PC. pulse cannon, and you'll have a blast with the Rocket Launcher. Fire is a hot weapon that turns you into a living inferno. Your ESWAT suit also has a Burner that enables you to fly short distances. However, be advised: It has limited fuel and you can't use it in every Mission.

If you're using a special weapon when you die, you lose it. So if your life bars are down to two, switch to the Shot weapon (you never lose that).

The New Sheriff in Town

ESWAT is a cut above typical "cop in a can" shoot-em-up adventures. It seems a little tame at first, but before you know it -- game over! If you're looking for a fast-paced gunfight, check this one out. ESWAT's a mechanical cop action/thriller that will really test your metal, errr, mettle.

If you thought crime fighting was difficult now you should see what it's like in the near future. Criminals possessing weapons of unbelievable power and strength! Like laser guns which are capable of ripping through inches of solid steel! That's what you have to go up against every day because you are a cop. Not an ordinary policeman mind you but one of the very best. You've made it to the ESWAT force! Standing for Enhanced Special Weapons and Tactics you can put on a specially made suit which lets you go head-to-head with the thugs of the future. This is Sega's Genesis version of the popular arcade game and it has been translated beautifully. With level after level of both horizontally and vertically scrolling graphics, ESWAT captures all the intensity and excitement of the arcade game. Bound to be one of the best Genesis games coming out this year!

Gather experience in street combat as you go from rookie cop to seasoned veteran, complete with a RoboCop-style fighting suit. Great graphics and sound propel this game forward at breakneck speed through the crime-filled suburbs.

You are chosen to become a cybernetic supercop that is needed to crush the vile terrorists that are attempting to spread fear and pain throughout the world. Time to gear up and rock!

It's the future, crime is at an all time high, and the City of Liberty police are in dire straits! In a last ditch effort to combat this wave of wrong-doing scientists have developed a high-tech suit of armor which just may turn the tables on the villains. You're selected to enter the city's new top secret training program, ESWAT. Your mission is to prepare yourself to battle crime in the streets. If you're skillful enough to survive the training, you'll earn your own ESWAT battle armor and a chance to make the streets safe once again.

Contra - Hard Corps
Hard Corps plays fast and furiously and is just as beautiful as any other Genesis game ever created.

Demolition Man
Based on the Sylvester Stallone/Wesley Snipes movie. This is where the “non-stop action” description comes into play.