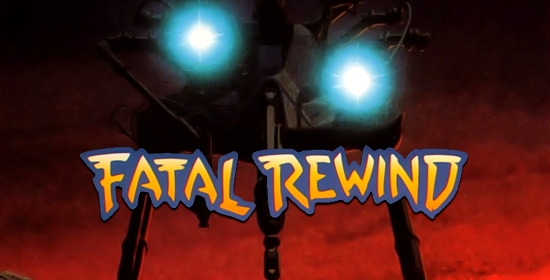 Electronic Arts is making its mark on the Genesis world by importing top flight games from personal computer systems; this time it's fatal... Fatal Rewind, that is. Amiga gamers know this as the near-legendary "The Killing Game Show" by Psygnosis.

The storyline is reminiscent of several sci-fi movies, "The Running Man" and "Robo-cop" come to mind. In a repressive futuristic society, you play a captured outlaw who's been stripped of his skin (Owww!) and placed inside a weird metal suit, which makes you look like "Robo-ostrich." To add insult to injury, you're also made the unwilling contestant on a deadly television game show, "Fatal Rewind," where you play for the ultimate prize -- your.

Fatal Rewind dishes out fatal fun for one or two players (non-simultaneous). You can set difficulty settings (Normal, Hard, and Hardest), Lives (1 -5), or Continues (0-3) to suit your tastes. The game displays its dynamite graphics in side view perspective with both horizontal and vertical scrolling.

Your task is to climb from the bottom to the top of 12 Pits of Death (on six levels, two Pits each). Sound simple? Guess again. Each Pit is an intricately designed, trap-filled maze. You scamper across platforms and scale walls. All the while, you're under attack by Hostile Artificial Life Forms (HALFS). These flying, segmented caterpillar things look like your geometry homework gone mad. To help you keep the pace up, Deadly to Organic Life Liquid (DOLL) gradually fills each pi.t If this toxic ooze catches up to you or you fall into it, say sayonara.

What's unusual about Fatal Rewind is the "rewind." After making that fatal mistake, you can watch your error on instant replay, in normal speed or fast-forward. Take control at any time during the replay to try to beat death, again.

As you boogie through each Pit, you can blast open canisters that contain tools and weapons. You find: Shape Keys (which deactivate force fields, create bridges, and more), Water Freezers (to stop DOLL, temporarily), and Oracles (these either display clues or a smart-aleck remark).

As for weapons, you start the game with a low-power blaster, but you can find nine short-term use, high-powered weapons such as Triple Missiles, Laser Bolts, and Mine Sweepers.

Fatal Rewind has the extras it takes to be great... an interesting story line, fine-looking graphics, and fresh music (not in stereo though). The mazes are intense brain-stumpers that require more than just moving and shooting. The final level, 6-2, is particularly complex.

Sometimes combinations of multiple switch hitting are required to beat a level.

The game-play, however, is a bit problematic. The directional pad and Button C both make you jump; press Up slightly as you move Left or Right and you might leap to your death.

In general, it is a usual arcade game, but with one original peculiarity: you have the opportunity to view that piece of the level which you have already passed.

The plot of game is perfectly designated by the words: "Time of the big show fun the Earth". The "show", begins with the warning to the player at the start of the level in which the standard "Get ready " is followed by "to die". The Game demands a very high tempo - the water with which the slightest contact is fatal, keeps on rising all the time, you should strive not only to progress forward but also upward, continuously shooting and collecting prizes. And the prize-winning weapon is the unique high-grade means of struggle against enemies, as the initial weapon you have at the start is harmless for most of them.