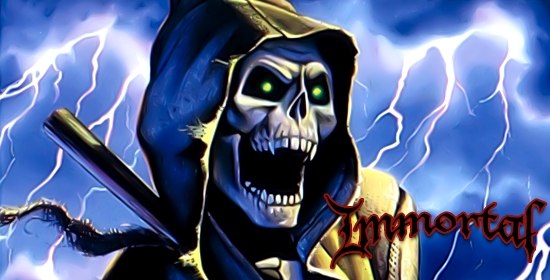 View all 60 The Immortal Screenshots

Immortality does things to your head. Firstly, youve got a lot of time on your hands, so you build yourself a huge sprawling eight-levelled isometric dungeon. You design it cunningly so theres all manner of secret passages, traps, magic potions, and horribly deep pits, in-between rooms, caverns and tunnels. Then you pack it full of monsters (trolls, demons, and all their goblin ilk) and sit back, listen to the radio, and wait for some poor deluded mages apprentice to come in and attempt to kill you.

You are (wide-eyed surprise) that mage. Following the distant sounds of Necromancer fm, you trek through the eminently mappable subterrania. doing your wizard stuff: mixing spells, interacting with fountains and regularly taking on the monsters. Combat is a little strange. On encountering a bast, a close-up screen appears, with you and your pal facing each other like mirror-images. A furious beat em-up style fight sequence follows, with little energy bars going up and down like pistons. He who waggles most wins.

The Summoning did this sort of game better, if a hundred percent more long winded. It had a clever mouse-driven interface which made movement and real-time combat much more approachable. The Immortal falls down in this respect with cursor keys and close-up combat, but its early 90s design and one location one problem style play stands up well. Dont be put off by the deadly ega spell which had been cast on the graphics. The 16 colours are used to acceptable effect. On the whole, a worthwhile medium-classic buy for RPGers.

The Immortal is only the second Nintendo game from Electronic Arts, long regarded as one of the leaders in computer gaming. And like EA's first Nintendo game - Skate or Die 2 - it's a beauty!

In The Immortal, you step into the robes of a young wizard. Your teacher, the great Mordamir, appears in a vision. He asks you to help free him from the Labyrinth of Eternity, where he is imprisoned.

Not long after you begin this perilous quest, you'll discover that the labyrinth is filled with danger: pitfalls, booby traps, trolls, goblins, and worms big enough to swallow you whole.

By carefully questioning everybody you meet, and by collecting every key, scroll, and message you can find, you'll learn clues and gain powers. When words or spells fail, you'll have to fight. The battles come to life with first-rate animation, and all of the action is accompanied by one of the most effective and elaborate soundtracks ever to grace a Nintendo cartridge.

Best of all are the graphics. The corridors and chambers of the labyrinth are shown from a three-quarters perspective that helps convey an atmosphere of darkness and danger. The lighting effects, textures, and animation of the figures are all handled with a fine attention to detail.

Mordamir, your teacher in the arts of wizardry, has disappeared into the labyrinth of Eternity. Now you stand poised to find him by marching into the nightmarish blackness of a foul-smelling cavern -- the biggest hole in the ground you've ever seen! What you won't do ‘or a good education.

Gettin' Down to It

The Immortal by Electronic Arts is an excellent blend of action and puzzle-solving with a pinch of fantasy RPG-style gaming. NES spellcasters already know The Immortal, and this is essentially the same game with just a few extra hazards (notably an eyeball-to-eyeballs confrontation with some nasty arachnids) and 16-bit graphic quality. If you've completed the 8-bit version, then you know how to beat this game, too.

Your quest descends through eight dark, dank levels. You get a 3/4 overhead perspective of the action as you guide the wizard through the labyrinthine dungeon hallways. Onscreen the game areas look like you've sliced through the dungeon and pulled off the top.

Adventures in Light and Darkness

Each gloomy level is packed with puzzles, traps, items to find, places to go, and people or creatures to meet. Trolls and Goblins make up the majority of the subterranean population. They're engaged in an all-out underground war, and you have to figure out whose side you're on.

Get into a close encounter of both kind and the onscreen action switches to a close-up, full-length 3/4 view of you and your adversary. Here you're both stationary as you hack it out toe-to-claw. Your moves are duck, jab, forehand slash, backhand slash -- period. The combatants are practically in slo-mo by arcade action game standards. That might sound about an exciting as a high school tennis match, but the story here is engaging enough that you learn to accept the poky fighting as the mystery draws you in.

The key to winning swordfights is to duck until your opponent gets tired.

Solving The Immortal requires smarts and patience. You must outwit traps, figure out puzzling obstacles, and track down key items in every level. Sometimes the characters you come across rap down hints and pieces of solutions. You ought to keep a pen handy to record key conversational clues. At the end of every level there's a lock courtesy of master (some would say "mad") locksmith, Lindli the Dwarf. This guy definitely had something against free access, and even if you possess the key items and the clues it's going to take some brain sweat to figure how to get the locks open.

Don't worry not all the action's cerebral. You get to fly a Magic Carpet and out-paddle a vile sea monster. You use some neat stuff such as a Giant Worm Detector, Dust of Complaisance, and the shape-changing Proteus Ring. You cast Fireball spells, plant deadly Spoors, and flash Blink Spells. You haul everything around in a Wizard's Pack, which is a fancy-shmancy item screen.

The gameplay is solid in some areas, soft in others. Especially notable is a sequence where you shrink down to mouse-size. Onscreen you're nothing but a blip a 'la Tinker Bell maybe a pixel across, but you can still make your character scurry past some foot-stompin' Trolls. On the other hand, picking Lindli's locks, which requires you to place items in small depressions on the ground with some precision, can take painstaking button pressing.

The graphics and the animation are superb, and the colors and art are in a classic fairy tale style. The characters feature excellent detail in both their appearance and their movements. However, some aspects of the game may be too detailed. There are 31 gruesome death scenes in this game -- 19 for you, 12 for your enemies. You dish out some pretty graphic, gory damage to Trolls and Goblins with your sword, but in turn you die some pretty horrible video deaths yourself. So before you tackle this game make sure you've got the guts, The Immortal's definitely got them -- and several other organs, too.

The Immortal conjures up an extraordinary adventure for 16-bit fantasy fans and action buffs. Even the music sets a mystical mood. Its only drawback is that once you solve the game -- you've solved it. This is a linear adventure, which makes replaying it much like re-reading a good whodunnit novel after you already know whodunnit. Of course, trying v to solve this game can drive you nuts. EA even holds your hand by including step-by-step instructions for the first level and hints through Level 7 in the manual. If you want to add some major magic to your video gaming life, fire up The Immortal.

Mordamir, star wizard of Electronic Arts' popular NES role play game The Immortal, is showing his true 16-bit colors in a Genesis version of the same name. Improved graphics, more gore, additional levels, plus new and terrifying death-traps will both wow you and scare you. As a former student of Mordamir's, you set out to rescue him from the bowels of a dark and foreboding medieval dungeon. There you encounter all sorts of evil creatures including trolls, goblins, slimes, and hideous man-eating worms, which erupt out of the floor. Luckily for you, with the bad there is also good, and you'll find it in the form of helpful items, such as Keys, Notes, Magic Scrolls, and more. All that you know, you learned from Mordamir; the question is... is it enough to save him?