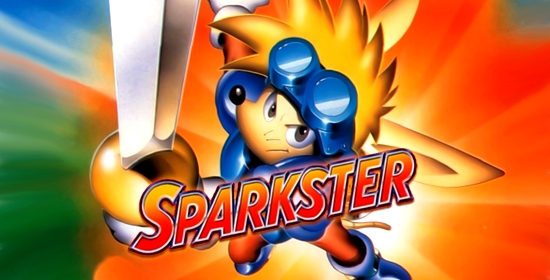 This is the follow-up to the terrific Genesis cart, Rocket Knight Adventures. Sparkster, the daring opossum with a rocket pack is back, and in the typical Konami fashion, it's loaded with plenty of awesome special effects. The enhancements made to the original game include smoother animation, a tougher quest, and lots of hidden features.

If you like the Genesis game, the sequel will appeal to you as well.

The little Sonic-like guy is back for his second adventure, complete with a new haircut and an 'attitude'. If you were a big fan of the Rocket Knight Adventures, then you're gonna love this!

Ok, I'm angry with all of you. When Rocket Knight Adventures was released for Genesis, it sold okay, but a great game like that should've flown off the shelves. Those of you who read my feature on it last July knew how good it was. What was the problem?

Thankfully, those big-hearted softies at Konami are giving you a second chance. Sparkster, the opossum's second game overall, marks his first SNES appearance. And like Rocket Knight, Sparkster is a great game. Did you catch that? It's a Really Great Game.

Er... I admit that the story could use a little imagination: the princess has been kidnapped by the evil knight Axle Gear... again. But the lame plot doesn't affect the all-out action. Sparkster succeeds by throwing a ton of stuff at you, with fresh new challenges waiting at every level. There's creativity around every corner, from the turbo-charged robo-ostriches Sparkster rides to the overhead shooter stages later in the game. Hey, I'm giving you a no-snooze guarantee, here!

You may notice that Sparkster sports a new look this time around. Konami ditched the so-so helmet in favor of a new, hip haircut. This was to give the character more of an edge, so that he hopefully makes a better connection with fans who like a mascot with an attitude. Plus, the stylish one also comes equipped with a few more standard moves than last time.

So if you're into original, fast-paced action (or you're just an opossum lover), don't miss out on Sparkster a second time. As for you Genesis players, go back and give Rocket Knight a look. It's one of the best action carts out there for Genesis, and you can find it for real cheap by now.

Sparkster is the hero from Rocket Knight Adventures, and now he's appearing in a brand new adventure for the Super Nintendo. The graphics and animation beat out the amazing Genesis game. That's saying a lot, considering the Genesis game was so cool. Sparkster looks really hot. I just hope that this great game comes out in the States. Look to GameFabrique for more information.

Sparkster, the Rocket Knight opossum, is back in a SNES sequel to last year's excellent Rocket Knight Adventures for the Genesis. This game holds its own with fun game play supported by fine graphics and sound. Unless you burned out on the original, you won't regret putting in some time with Sparkster.

A Spark But No Fire

To the Rocket Knight veteran, Sparkster offers something old and something new. Sparkster must rescue the kidnapped Princess Flora from a new enemy -- the Wolf Army -- and there's a World Domination plot twist. But in game play and look, Sparkster is just like Rocket Knight Adventures, which was one of the most visually impressive 16-bit games around when it came out.

Accordingly, the graphics and sounds in Sparkster are strong. The humorously illustrated characters have a sharp, cartoony look, and the big bosses move quickly. Still, slowdown and flicker sometimes mar the game's performance. Moody music recalls the film Aliens and ups the game's intensity. The predictable action/adventure- style sound effects include standard explosions and shots.

Unfortunately, Sparkster's similarities to the original Rocket Knight aren't all for the better. Sparkster's control, for instance, hasn't improved. The unwieldy rocket pack is still good for only brief spurts of speed. Sparkster has a useful new somersault move, but it's dizzying when overused, and there aren't enough power-ups or special weapons, which would've improved the FunFactor.

To Sparkster's credit, the game has lots of game-play perks: multiple routes, hidden rooms and terrain that varies with the difficulty level. There are lots to explore, and you'll discover many ways to conquer the stages. What's more, the five difficulty levels include two secret Hard modes. The Easy level is a condensed version of the game; Hard mode contains a whole new level. These options ensure that the challenge lasts, no matter what your skill level is.

Sparkster isn't as fresh as the original Rocket Knight. The play control should've been improved, and new weapons would've been nice. Still, Rocket Knight rookies will do well with Sparkster.

Sparkster, the potent 'possum of Rocket Knight Adventures fame, is in for some big problems. In his latest adventure, two girls fall for him, one gets kidnapped, The Devotindos army attacks Zebulos's home planet, and the king of Gedol puts a price on Sparkster's head. Sparkster's gonna have a busy day, and you'll wanna be there for the action.

Sparkster has some tricks up his sleeve for Cedol's minions. He packs a sword and a couple of special attacks to spice things up. The Rocket Attack cuts through obstacles like butter, while the Screw Attack puts a twist on things that get in his way. Both methods take him high above the playfield where many bonus items await, including a Flaming Sword, health rechargers and l-Ups. When you gather gems along the way, a slot machine cranks out bonuses -- or enemy bombs.

Because of his special attacks, Sparkster's controls are more involved than those in other multi-scrolling adventures, though it doesn't take long to get the hang of his jet power and when to use it. Later in the game, the controls change as you drive gigantic robot through the streets and go head-to-head with another robot. The response time is sometimes slow, but it's not a major impediment.

The sound effects and music accompany the action well. Explosions and gun blasts enliven things up, and a fast-paced soundtrack keeps you involved.

The smooth graphics are supported by solid animation for all the characters, even during the super-size robot ride. Occasionally, though, the action gets so intense in the game's later levels that the Genesis bogs down and the animation momentarily slows to a crawl.

Despite some minor flaws, Sparkster's a good progression from the original. The four difficulty levels don't just add more enemies; they actually throw fresh sections at you. You'll have your hands full. Whether Sparkster saves Princess Cherry is up to you, but the path to victory's a real blast.